When Frank Lopez was approached by the director of the gallery at the Bath House Cultural Center to curate a photography exhibition, he immediately thought of a handful of artists he wanted to feature. In addition to standouts from Dallas, he DM’d photographers all over the U.S. that he’d been following on Instagram.

It was a surprising turn of events considering the Greenhill School educator and longtime professional photographer abstained from techie photo apps like Instagram until just a couple years ago. While he teaches digital photography to his students, Lopez has mostly eschewed technology in his own practice in favor of the diminishing analog art form.

“Social media and digital technologies have their place. Instagram is a great tool for teaching and for exploration,” says Lopez, who is best known around Dallas for his tintype, ambrotype, and stunning pinhole photographs. The latter is one of the most primitive image-capturing devices–literally a box with a tiny hole and a swatch of film inside–no lens, no mirrors, no gears, no buttons. 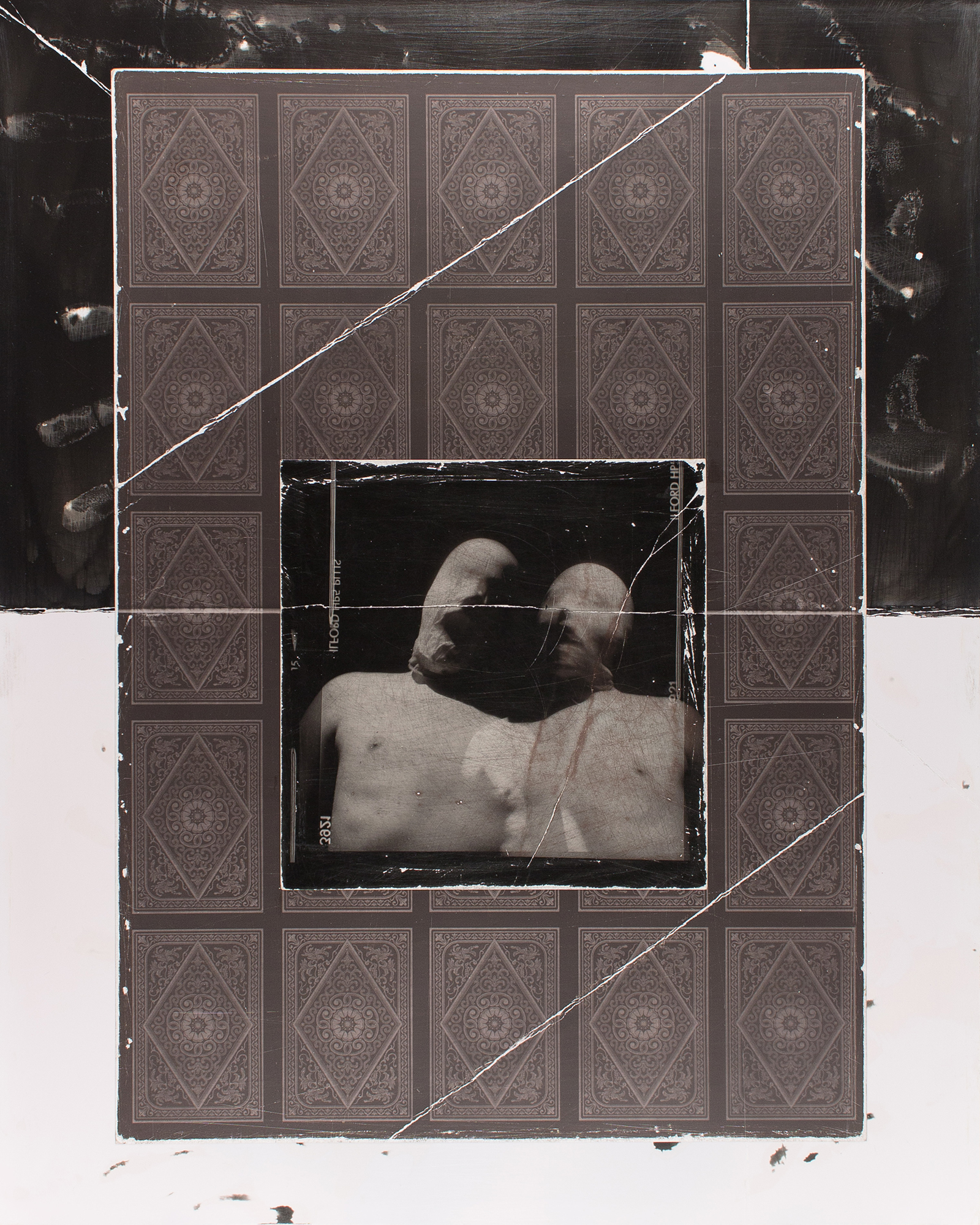 The exhibition that resulted from his newfound social media connections is still decidedly a low-tech affair. The Intentional Hand: A Photographic Exhibition of Manipulated Imagery is full of abstract works of photography that were constructed and manipulated “by hand” using analog techniques nearly exclusively.  “It’s a response to digital technology,” Lopez explains.

To be included in the show, Lopez first had to be captivated by an image’s look, but the curator was looking for another layer of meaning in the work. Each of the artists seeks to explore universal themes that plague all of us.

“I wanted a broad swath of artists with different points of view, but there were similarities between the conversations in the work,” says Lopez, pointing to themes of, “personal struggle, grief, and growth – a lot of the human condition.” 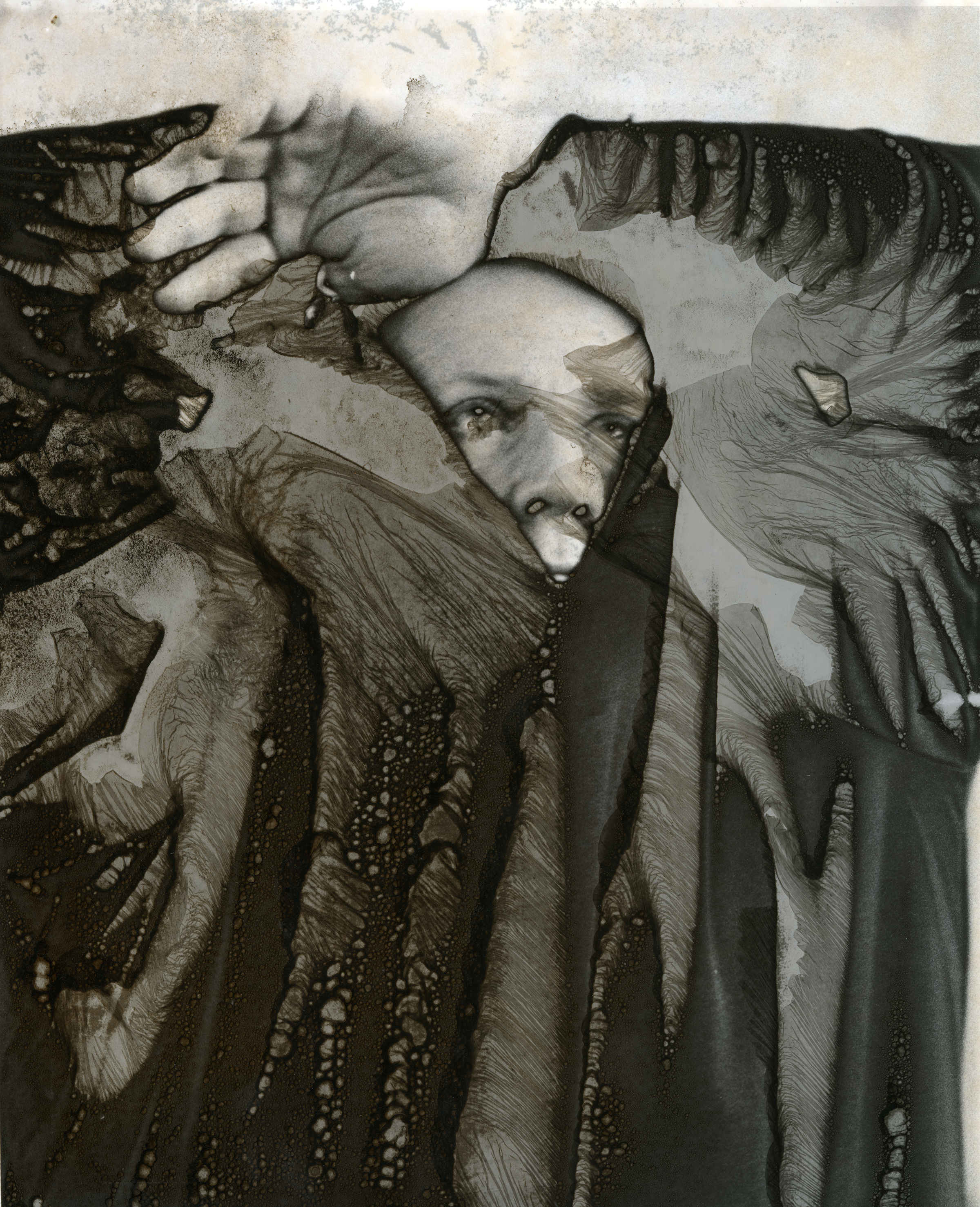 Using distressed paper emblazoned with the atomic whirl, Alaska-based JJ Lazarus contemplates the next imminent threat to human existence – climate change and planetary destruction as a result of industry and careless human behavior.

“We’re making the same mistakes all over again,” Lopez says of Lazarus’ work. “Looking back to the end of World War II and the atomic bomb, we were facing destruction of people through the use of technology.” For the piece, Lazarus used paper and materials from that time period.

“It’s very important that we continue to have these conversations,” Lopez says. “Interesting art pulls you in and gives you a venue to discuss feelings and ideas.”

Marcy Palmer contemplates self-destruction, albeit on a smaller and more intimate scale–specifically the loss of self and rebuilding of identity in the wake of becoming a mother.

“There’s now a new person we’re responsible for and the fear that comes with that,” Lopez explains of the symbology in Palmer’s piece, So Tell Me Now.  “It’s almost as if the hand in the photo is clawing toward something or trying to keep someone still attached. It’s absolutely stunning, especially in person.”

Along with The Intentional Hand, Lopez had the opportunity to curate a concurrent exhibition on site at the Bath House. In a neighboring room, Lopez’s honors photography students from Greenhill tackle no less weighty subjects. Both exhibitions are on view at the cultural center through June 8, 2019.