The answer, of course, is yes.

But it’s more of a spur than an essential part of the interstate system. And its consequences have been grim. Old Claiborne Avenue, with its generous, oak-shaded median, a walkable neighborhood center with a history of picnics, Mardi Gras parades and black marching bands, literally disappeared under the broad new route that backers claimed would carry traffic and prosperity into downtown New Orleans.

The number of businesses along the freeway’s path literally collapsed — from 132 in 1960 to 35 in 2000. Poverty and decay reigned, the stark expressway section creating a hostile no-man’s land around it.

Today the Claiborne expressway “is an aging interstate… nearing the end of its useful life and beginning to deteriorate,” requiring frequent maintenance and “possibly reconstruction to carry traffic safely,” according to the exhaustive new report advocating its demolition, issued jointly by CNU and the local Claiborne Corridor Improvement Association.

It would make no sense, the report suggests, to spend the $50 million the Federal Highway Administration’s national bridge inventory says might be needed just to repair or replace the Claiborne expressway’s seriously decayed interchange ramps.

In Milwaukee, where Jon Norquist — then mayor, now CNU president — led the successful effort to dismantle the Park East Freeway, the bill for teardown and putting a surface street system in place was just $30 million, compared to $80 million to rebuild the freeway.

In fact, teardowns, at least on unessential interstate links, may start looking more attractive nationally as the U.S. Department of Transportation struggles to come up with sufficient maintenance budgets to keep up the elevated freeways passing their effective 50-year lifespan point.

Funny. These are all the same arguments I’ve been making to strip out the intracity freeways in Dallas. It’s the economy stupid. Highways, while necessary in linking regional and interstate economies are actually destructive locally. This is why in most sane and/or European cities highways are considered a LULU or Locally Undesirable Land Use, meaning they come nowhere near residential areas, remaining on the peripheral edge of the entire city where junctions lead to boulevards which may then enter the actual, functional fabric of the city and local, interconnected economies. 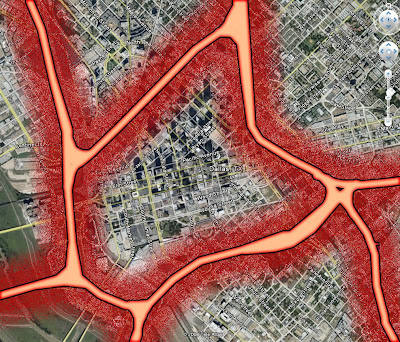 Tearing out freeways are 1) cheaper than maintaining them, 2) removes fiscal burden from crippled state and DOT budgets, and 3) leads to qualitative improvement of local real estate. It only makes sense that a sociofugal design element such as freeways also flings investment far away from it, leading to decay all along it. Attract people, attract investment. This is a simple formula. It is a shame the dialogue has been so poisoned by the stupid and/or corrupt. The comfort of the familiar, a trap it is.