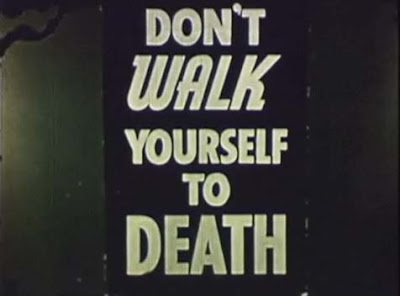 Thanks to Robert Wilonsky at the Observer for alerting me to this video from the 1950’s imploring Dallas to move that traffic. It is worth the watch if only for the old video shots of 50’s era D-Tex, which are pretty cool. There is no embed code with the video, so you have to go here to watch it, but I’ll include some stills with general commentary. 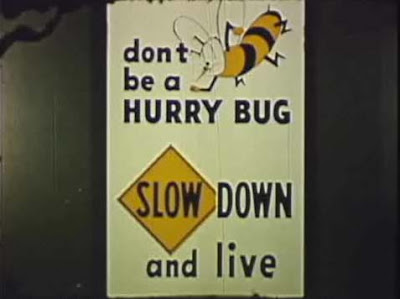 My favorite part of the entire thing is how unaware this video and by extension transportation policy is still to this day of the logical inconsistencies underlying their theology. Got to move that traffic swiftly, BUT DON’T SPEED! Say wha?

So we design roads comfortable enough to drive at uncomfortably fast speeds then devote resources to regulation and enforcement of those streets. 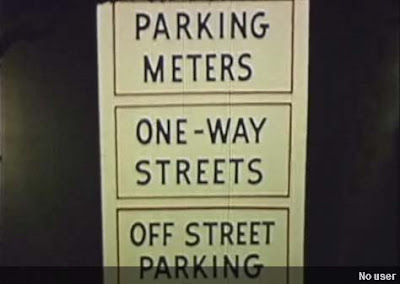 To better understand this video and the policies espoused, it is important to understand the general mindset of the day. At the time, economic productivity was defined by the assembly line. Theoretically it invaded all fields including urban design. However, urban design being that it is complex is antithetical to the assembly line which requires simplicity and a vague, most likely, over-simplified notion of efficiency. 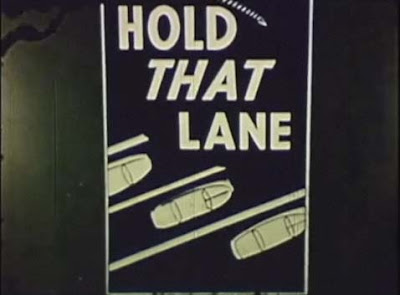 But, our theoretical models suggest we must keep building new lanes to tantalize you with the illusion of choice and that the other lane might always be moving faster than the one you are currently idling along.

So in order to distill the notion of city into simple enough terms that economic productivity theory of the day could work with, the various segments of urbanism were compartmentalized in every way possible: from single-use zoning to transportation policy, which is what we have here. the resultant system is one where each of the specialized professions and their tailored goals are in competition with one another, pulling the city in opposite directions rather than orchestrated and moving in the same direction toward a singular goal. The destination of a great city.

By doing so, they took 10,000 years of accrued awareness and understanding of urbanism and flipped it on its head favoring one-way streets, no on-street parking, road widenings described as dire necessities, and other design mechanisms to ensure that there is no “friction” impeding the efficiency of the conveyer belt of the auto-oriented assembly line. Placemaking and livability be damned.

Unfortunately, friction, convergence, choice are all necessities for cities.

Why? Their stated goal was that it was necessary to make downtown shopping work… uh, how is that working out? This is what happens when you take thousands of years of empirical evidence and throw it out the window in favor of ideological righteousness. 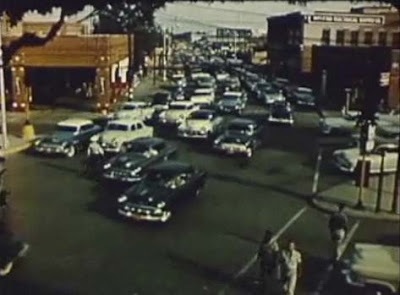 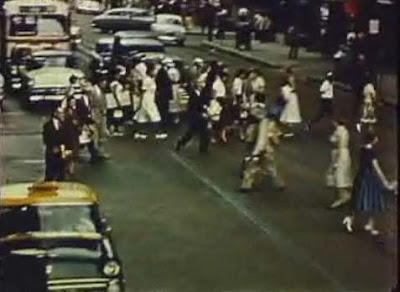 However, the report is right in one sense, traffic is the lifeblood, the pulse of the city. What it gets wrong is that it oversimplifies. It streamlines. It only looks at traffic from the perspective of the car. In actuality, traffic should be thought of as all forms of transit, preferably those with the least cost and greatest efficiency, walking.

For an example of how single minded transportation policy actually undermines the notion of efficient markets, we’ll take a quick tour of a few roads around the City. 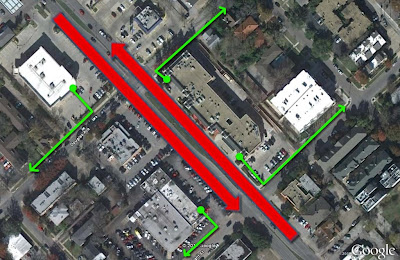 Lemmon Avenue. It is wide. And while it is two way, functionally it operates more as a one-way hybrid with the grass medians. Medians make for chutes, which theoretically help traffic to flow. However, flowing traffic, particularly at a high rate of speed prevents traffic from crossing. That is traffic of all forms, including pedestrians. The best you can hope for here is that some of the residents might walk from the neighborhoods adjacent to the drive-thrus. Because there is no on-street parking, it all has to happen off-street. Because it is off-street, the buildings are set back with parking in front for convenience. 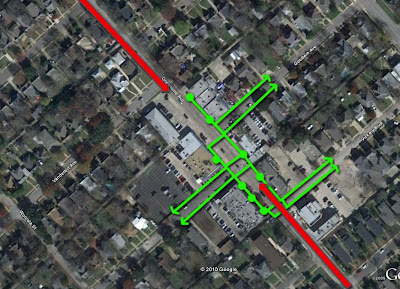 Greenville is an improvement over Lemmon, but it isn’t perfect. The scale of the street allows for a clustering of commercial space all along Greenville rather than the linear “strip” like on Lemmon. There is some parking, but it doesn’t define the space nor disconnect it from the neighborhood or the synergistic effects of the adjacent buildings. Some pedestrian crossing can occur because the traffic is slowed enough by the scale of buildings and activity on the sidewalks providing friction. Any higher rate of speed here and the sense of place is destroyed. 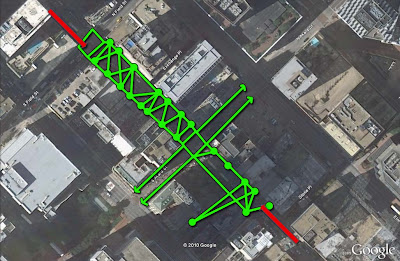 Lastly, the extreme example. The three-block stretch of Main Street. The actual beating heart of downtown Dallas that traffic engineers nearly extinguished. Driving on it is actually a hassle…which allows for closer, more efficient connections to be made. Why? Because the nature of the street favors pedestrianism to the point of jaywalking, all of the connections made between source and destination: office to restaurant, office to office, home to bar, bar to back home (forgot the circuitous, stumbly route).

In this way the strict goal of moving cars undermines the viscosity of connecting people to destinations. Roads become barriers to connectivity, which themselves become undesirable to be in, to live on, or to walk along (or more importantly, across).

Once that occurs, the roads become repellent forces while placemaking and economic efficiency requires magnetic forces, things people want to be around. Why economic efficiency? Because of distance and the cost of energy to traverse that distance, which you, the consumer, bears.

Furthermore, each of the green lines represent (virtually) energy nil interactions compared to the drive-to scenario. Most intra-city destinations are ones that could occur without getting in a car or on a highway. For example, the average Roman citizen can take care of all of their daily needs without a car. Having one is a luxury. You can if you choose and can afford it. On the other hand, in Dallas, you MUST have one.

The delta between energy spent in one scenario vs. the other becomes the cost or tax for every single interaction we have. Every connection, takes car ownership, maintenance, gasoline, and the taxes to cover road construction, maintenance, and eventual widening of roads. All costs externalized onto you. In that our cities are the physical manifestations of our economies, the local economy organized around highways, arterials, and car ownership is the manifestation of a pyramid scheme.

To put it into perspective, the average American drives 12,000 miles/year. While it is difficult to find exact numbers, there is some data suggesting that 75-80% of all trips are less than 5 miles. Without knowing how long the other trips are, or the purpose of these trips, it is difficult distill these numbers down further.

So for simplicity’s sake, let’s say that with a different, more walkable city form, we could reduce the amount each of us drives by half. That is 6,000 miles saved accomplishing the same amount of trips. Mobility isn’t reduced. It is improved via better urban design. 6,000 miles in a car with average mpg of 20, and $3/gallon gas, that comes out to $1,000 per person/per year saved. In a City of 1,000,000 people, that is $1 billion/year still in the local economy.

Of course, this also doesn’t count the reduced infrastructure and tax burden necessary to support said excess infrastructure (or the band-aids for those mistakes) or the long-term costs of pollution, health effects, traffic collisions, or reduced productivity due to car-traffic jams, the stroke in a car-oriented economy.

As Mumford says, just make cities for lovers and friends. Ignore car-oriented theology and focus on placemaking. Want to be a world class city, become the most walkable city… it will also stimulate the economy exponentially.