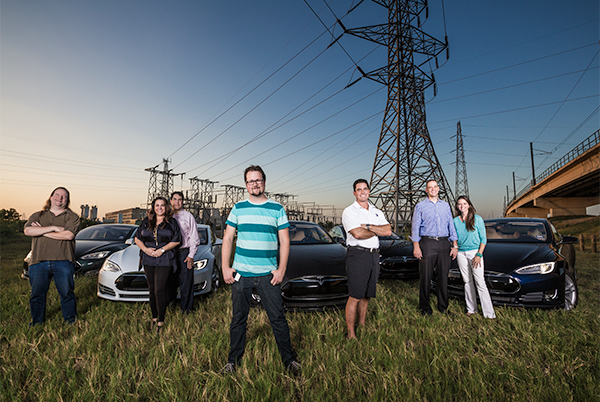 The Electric Company: Owners Chris Turbeville, Lillian and Michael Rodriguez, Brad Holt, Thad Smith, and Robert and Chris ter Kuile photography by Billy Surface
photography by Billy Surface
Consumer Reports gave it 99 out of 100, its best test score. It’s Motor Trend’s 2013 Car of the Year. Automobile Magazine’s, too. And it’s electric, with price tags starting at $59,900 (before tax credits) and hitting upwards of $100,000. Get those charging outlets ready, right?

Courtesy of Tesla Motors Tesla Model S
You can’t actually buy Tesla’s Model S in Texas. Can’t test-drive it here, either. Yet more than 700 Model S Teslas are navigating Texas’ roadways. The company doesn’t know how many there are in Dallas. “It’s amazing because most of those owners have never had the opportunity to test-drive at all,” says Tesla’s Alexis Georgeson. Purchases are made online or by phone (each Model S is built to order), perhaps after a visit to one of Texas’ “galleries,” education hubs in Austin and Houston that allow for discussions on the benefits of going electric and Model S options. But that’s about it. “We can’t give test-drives out of those locations or talk about price,” Georgeson says. Franchise law, which the Texas Automobile Dealers Association is lobbying to protect, prohibits a car manufacturer from also being the dealer.

Still, Tesla is pushing along in the state. There’s a service center in Dallas, and five superchargers should appear by the end of the year. In late August, the first opened in San Marcos. It’s free to Model S owners and takes about 20 minutes to put about 150 miles worth of juice in a car. Waco was on the docket for early September, all part of an I-35 focus, allowing travel from San Antonio to Dallas.

Despite the legal struggles, Georgeson says, “Dallas is a strong market for us. Dallas embraces technology.”