To Richard and Chad Bettinger, their house is more than a home. It’s a piece of North Texas history. Built in 1896 for the family of well-to-do banker and cattle rancher George Samuel White, the residence sits on an acre of land near downtown Weatherford and was designed by George F. Barber, a Tennessee architect known for his mail-order house plans. “The house is almost 125 years old,” says Richard, who has owned a series of historical homes in Weatherford over the past 20 years. “Just think how much life has been here.” 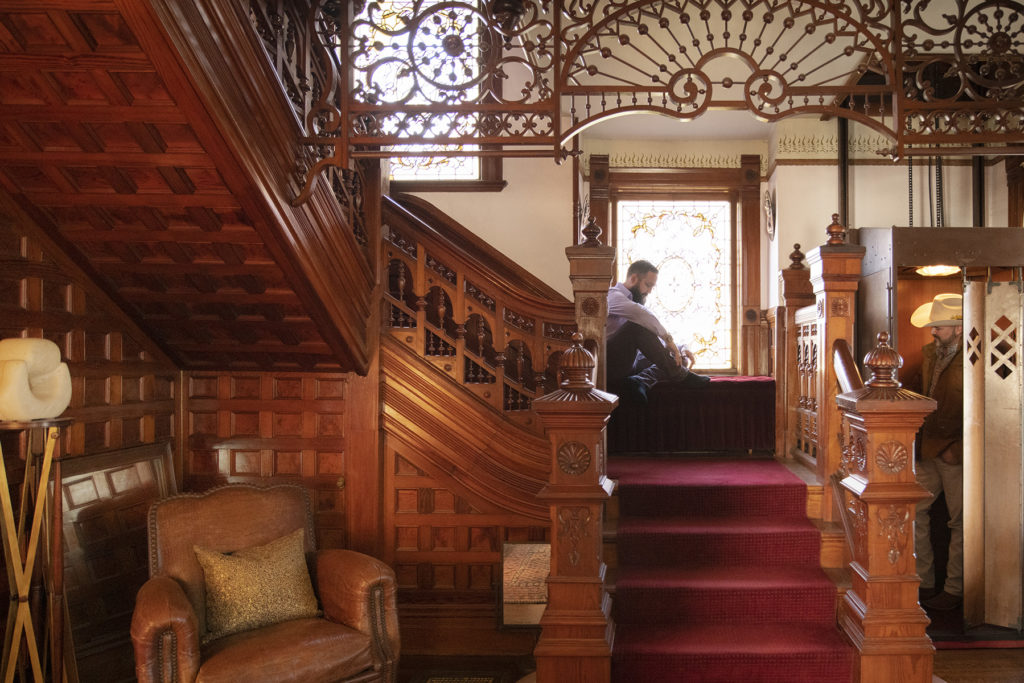 Elaborate handcarved millwork fills the home’s entryway and stairwell. An elevator was added in the 1930s when the Akard family owned the property.
Elizabeth Lavin

During the week, Richard works in sales for David Sutherland in Dallas, and together the couple produces Bettinger Studio Photographic Art and the Newlon Collection, a line of art-based wallcoverings. They spend their spare time, however, reviving their three-story Victorian-era mansion. By the time the couple bought the house in the summer of 2018, years of neglect had left it with boarded-up windows, rotten boards in the eaves, and a flock of buzzards roosting in the trees. “There were even critters living in the attic,” says Chad. But there was also plentiful evidence of the home’s former grandeur, including a sweeping wraparound porch, large stained-glass windows, and whimsical gingerbread trim. Inside, it was equally impressive, with intricate woodworking that had been virtually untouched since the turn of the 20th century. “I think it’s one of the most fabulous historical houses,” says Dallas interior designer Elizabeth Robertson, a friend of the couple who encouraged them to buy the property. “I think the millwork alone is worth what they paid for the house.”

“We’re just maintaining it for whoever is next.”

The couple has spent the past year and a half restoring the exterior. They hired a specialty carpenter in Weatherford to re-create the missing pieces of gingerbread, and they’ve done extensive work in the yard. To complement the original terra cotta brick, Chad handmixed a custom shade of green for the wood trim. “We tried to keep it in the same color family,” says Richard, “just freshening it up a little bit.” Now they’re starting to pick paint colors and wallpaper for the interior and trying to determine the final mix of furnishings. The couple bought several ornate antiques at the home’s estate sale—including massive handcarved cabinets and beds that date back to the 1850s—and paired them with contemporary art and a few pieces of modern furniture. “We just want it to look really handsome,” says Richard. “When we’re done, I’d like it to have a London gentleman’s club feel.”

Their main goal, though, is to preserve the history of the house and keep it as original as possible—and they have no intention of making it look like new again. “The flaws are part of the patina that make it special,” says Richard. “We’re really just a part of the house’s history. We’re just maintaining it for whoever is next.”