Interior designers Bill Cates and Russ Peters were living in their dream home. They just didn’t know it yet.

In 2008, the couple purchased their fifth home—a World War II–era cottage in Oak Cliff’s Stevens Park Village—thinking they’d flip it. They added a bathroom, turned the garage into an office, and freshened up the interiors. (The renovation turned out so well we featured the home within these pages in 2012.)

As time went on, the couple decided they’d stay put. But in 2015—the result of a seven-year itch, perhaps—their 1,400-square-foot layout started to feel cramped.

“We love a project,” Peters says. “It was time. We looked around [the market] and there was nothing out there.”

Being designers, they know a good (and bad) deal when they see one, and they couldn’t make the numbers work on renovating a new home. “Bill said to me, ‘Let’s just add on to this house,’ ” Peters remembers. “I said, ‘It’s going to be impossible.’ ”

Cates laughs: “I just kept chipping away at him. My mom used to call that ‘pillow talk.’ ”

Peters eventually came around to the idea of an addition, and they called in their trusted crew to demo the existing master bathroom and closet to create a hallway into a new master suite. While they were at it, they converted the original master into a den, added a laundry room, and completely gutted the “teeny-tiny” kitchen into an entertainer’s dream, all while managing their roster of Peters Cates Design clients. 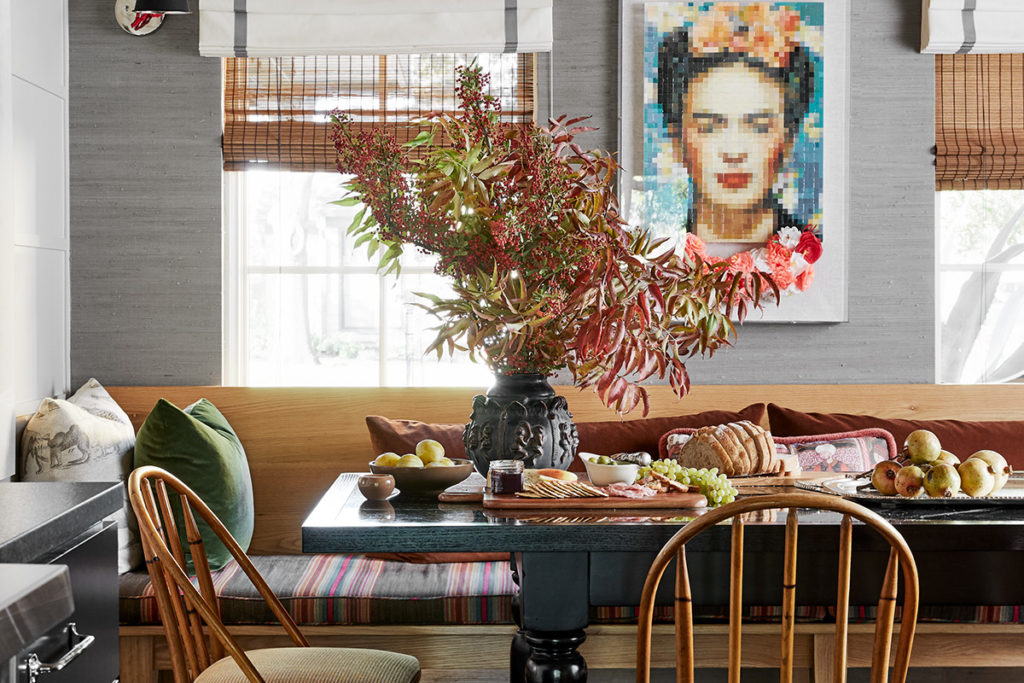 A custom banquet in the dining area provides a comfortable perch. An existing table was lacquered black and accented with leftover marble from the kitchen remodel. The Frida Kahlo painting was found at Ginger Fox Gallery, accented with papier-mâché pieces from La Mariposa and framed at E&D Plastics. An elephant vessel from Coco & Dash provides the perfect centerpiece for the table.
Cody Ulrich

At just under 2,000 square feet, their quaint cottage now fits all of their daily needs: a spacious kitchen and living area for post-work cocktails, a cozy TV room for bingeing Netflix, a quiet master suite with a view, and two home offices that are at opposite ends of the house. The couple can host family holiday gatherings in their newly designed space, Cates pouring drinks while Peters puts together a charcuterie plate or bakes his famous fruit pies. “We’re always in the kitchen, so people can sit there and drink wine and eat snacks,” Peters says of their custom black marble dining table.

But for a couple that works together and plays together, you wonder how they came out the other side of the nine-month renovation process. “We’re always pushing and pulling,” Peters says. “It’s definitely a combo of yin and yang and tug of war,” Cates laughs. 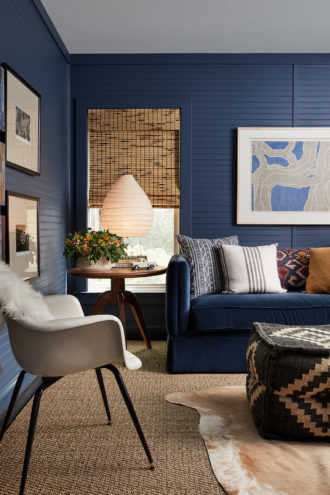 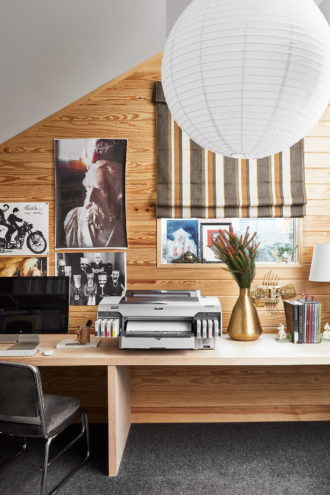 And when you meet them, it’s evident that they have mastered the art of collaboration. The pair often completes each other’s sentences: one piping in with an extra detail to a story, their words intersecting during almost every storyline. Similarly, each home decision is discussed and negotiated, such as a pair of wooden benches from Benny Jack Antiques. “I had to call Bill and ask if I could buy them,” Peters says. He apparently made a solid argument, as one of the benches now lives in their den, the other anchoring a vignette of coffee-table books and art in their master hallway.

“Everything that we have has a story. We’re collectors.”

Their mix of high and low pieces also share space amicably in the living room, creating a collected and layered look. Refurbished finds from White Elephant Antiques mix with Mitchell Gold + Bob Williams settees covered in Schumacher fabric, and a vintage Knoll Platner table pairs with hair-on-hide chairs from Mecox adorned with custom pillows in Michelle Nussbaumer and Kravet fabric. “Everything that we have has a story,” Peters says. “We’re collectors.”

The couple has more plans for their little dream home. They hope to build a studio in the backyard to hold client meetings, and there is no doubt that their interiors will evolve as they pick up treasures from their travels and uncover antique finds. But don’t expect them to move any time soon.

“We jokingly say they’ll carry us out of here on a stretcher,” Cates says. “We just love it.”

The Best Builders in Dallas