Misty Sanford stands in a construction zone on a hot August afternoon in West Dallas and cracks open a can of beer. “This is our standard-based Gose with raspberry puree,” she explains, pouring it into two plastic cups. The drink smells of sweet and sour raspberries and sparkles like a pair of Elton John glasses. It’s one of the many specialty beers produced by Manhattan Project Beer Co., the Dallas brewery Misty, her husband Karl, and their friend Jeremy Brodt launched three years ago. “I love this beer so much,” she says. “But we didn’t save enough samples for ourselves. So I’ve been buying it at Whole Foods, paying retail.”

For a while, even that was hard to do. Not long after Manhattan Project began canning its beers in September 2017, its cult fandom exploded, with cans flying so fast from retail shelves that Misty posted a map of delivery locations on the company’s website, just so everyone had a fair shot.

Yes, it brews popular beers, such as the flagship Half-Life, a crisp, citrusy Hazy IPA. But the law of supply and demand has come into play, too. Since the company began making beer in 2016, select local bars and liquor stores were the only places to find beers from the elusive brewery.

Manhattan Project has taken an unconventional startup approach and done things in reverse order, saving the taproom for last. Its product made the shop known throughout the craft beer crowd, but in August, its beer called Bikini Atoll—a reference to the devastating Marshall Islands nuclear testing of the 1950s—created a surge of backlash against the company. Regardless, the Manhattan Project will finally have their own home base, scheduled to open on Oct. 26. “Years ago, I thought you needed a taproom to build a brand,” Misty says, as loud power tools hum in the background. “Turns out, you don’t.”

“Manhattan Project’s new taproom should drive up production to 750 barrels a month.”

Back in 2011, Misty and Karl, avid beer-drinkers, asked their friend, Brodt, to create a beer for their wedding. He was an amateur home brewer who worked full-time as an engineer. Together, they tested 12 batches to perfect a Belgian-brown ale.

The brewing process was fun. But like Brodt, the Sanfords had full-time jobs. Misty owned a branding and social media strategy firm, while Karl was a business consultant. They brewed as a side hobby and, along with Brodt’s wife, would go on brewery trips together and imagine what they would call a company of their own. One idea that kept coming up was Manhattan Project. “We really liked the idea of collaboration and bringing the greatest minds together,” says Misty, refering to the way the United States, Canada, and the United Kingdom worked together to create the first nuclear weapons. “We started brainstorming ideas [for beer names] like Little Boy and Hoppenheimer, a play on Oppenheimer.”

In the spring of 2013, Brodt and the Sanfords entered their first home-brew competition; they used Manhattan Project as their team name. To their shock, they won first place in the IPA category. More competitions and awards followed, as did questions from friends and fans: “When will you go commercial?” and “How can I buy your beer?”

In 2016, the three went for it and crafted a business plan. Instead of starting with a taproom, they worked out an alternating proprietorship with Bitter Sisters Brewing Co. in Addison, renting brewing space like a room on Airbnb. The move allowed them to test the market and make mistakes on a smaller scale. It also forced them to appear at festivals, bars, and tap takeover events to promote their beer.

The timing was right. The percolating market continues to grow; there are now nearly 30 craft breweries in North Texas. And according to Brewers Association, a national trade group based in Boulder, Colorado, Texas ranks third in the nation when it comes to economic impact of craft breweries—$4.5 million as of the end of 2018. 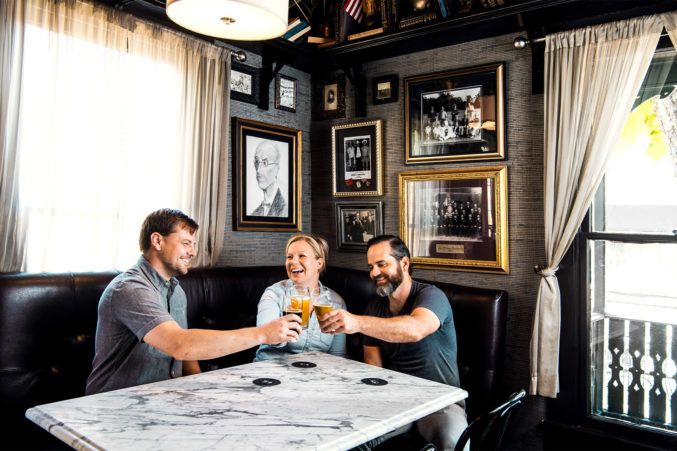 What started as a hobby has grown into a full-fledged enterprise for the partners of Manhattan Project Beer Co.
Brendan Meyer

The Manhattan Project partners bought a building on Sulphur Street in West Dallas in January 2018, with plans to open a taproom in the fall. However, delays pushed things back by about a year. Misty worried that their customers would move on. “But exclusivity is very powerful,” she says.

To keep things going, Manhattan Project shifted operations to Hop and Sting Brewing Co. in Grapevine. The move also allowed the partners to begin canning their products. The simple design of Manhattan Project’s cans—with white, gray, or matte black finish—is no mistake. Misty spent hours studying the cold cases at Central Market and Whole Foods stores. “Everything was screaming,” she says. “That’s when I realized we couldn’t do what everyone else was doing.”

Since releasing the cans, the brewery has grown by more than 1,000 percent. The partners are hoping for the same burst of excitement after their taproom opens. Back when they first started brewing at Bitter Sisters, they produced 40 barrels per month. By the middle of the fourth quarter, their production capabilities should hit 750 barrels per month.

Not everyone is a Manhattan Project fan. This past summer, the company received widespread criticism and complaints about insensitivity over their Bikini Atoll beer and their decision not to change the name when presented with opposing arguments. But the partners are holding firm. “We are not changing the name of Bikini Atoll, because we genuinely believe that our naming conventions initiate intimate discussions about the Manhattan Project and nuclear testing,” Misty says. “We don’t intend for our cans to be a history lesson. … But we hope that our entire brand is strong enough to pique curiosity about this part of history and its impact.”

When the taproom opens, it will have a coffee-shop-meets-brewery vibe, with an espresso bar and food (including Thai fried chicken and stuffed arepas), as well as a beer garden and live music. There will also be a beer-to-go station, thanks to a new Texas state law that takes effect on Sept. 1.

All of Manhattan Project’s core beers will be on draft, with revolving specialty brews, like the Raspberry Bikini Atoll. “This isn’t a core product, but it’s going to be one,” Misty says, as she takes another sip. “The taproom is a completely different set of rules.”