In 2016, Fin Ewing happened upon an article that promised anyone could learn to sing. He had never been much of a vocalist, but as a kid, he had spent time around country music greats like Willie Nelson, Tanya Tucker, and Larry Gatlin, and always admired people who could step into the spotlight and captivate a crowd. Ewing decided to find out if the article was accurate. He got in touch with a voice coach named Bruce Wermuth and asked, “Can I learn to sing?”

After chatting, Wermuth discerned that Ewing couldn’t play any instruments and had no history of singing. Baffled, he asked Ewing what his goal was. “I’m going to play a concert at The Rustic,” Ewing told him, “and Larry Gatlin is going to sing back-up for me.”

Ewing’s oddly specific intentions piqued Wermuth’s curiosity, and the two met. To get a sense of his ability, Wermuth had Ewing record several songs, and then helped him identify the right key in which to sing. Under Wermuth’s guidance, Ewing began to improve.

When he’s not unlocking his musical talents, Ewing is president of Ewing Automotive Group, which owns Mercedes-Benz, GMC, Buick, and Subaru dealerships. The business was started in 1940 by Ewing’s grandfather, Bruton Orand, and has been in the family ever since. 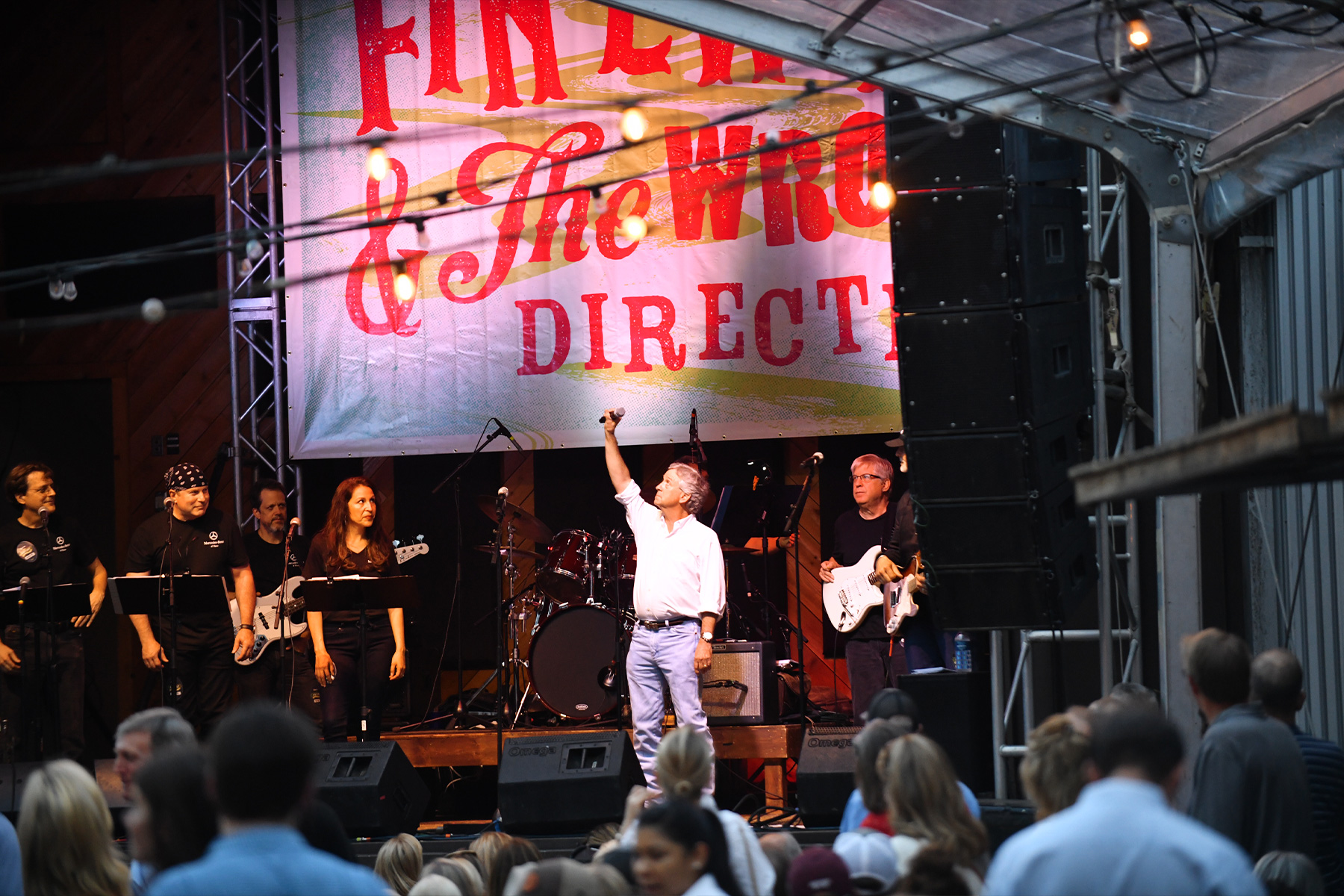 Fin Ewing and the Wrong Direction performed for a who’s who crowd at The Rustic in June. (Courtesy Patrick Green Pictures)
Patrick Green Photography

Ewing began his career in the business at age 8, cleaning the dealership’s coffee shop for $25 a week. Eventually he progressed through the parts department, and into sales. In 1985, his father, Finley Ewing Jr., tapped him to take over, and today, the company employs 470 people.

Along with cars, the Ewings are serious about golf. In July, Ewing was inducted into the 2019 Texas Golf Hall of Fame. He jokes that his sons, Finley and Charlie, grew up with golf clubs in their hands. Both received golf scholarships—Finley to Texas Tech, Charlie to Vanderbilt. After graduating, Finley played pro for a few months before returning home to work at Ewing Automotive; Charlie spent time in the family business but left to pursue a career in coaching. Today, Finley is COO.

“He has done a great job,” Ewing says. “I tell him, ‘Now that you’ve taken over, I’m just going to tell you where to send my check.’”

The two work well together, but Finley wasn’t initially supportive of his father’s dream to sing. In fact, the whole family feared he’d embarrass himself, so Ewing kept his voice lessons a secret. Finally, Ewing called Finley into his office and told him to come up with a list of all the times that Ewing hadn’t supported him. The son couldn’t think of a single example. 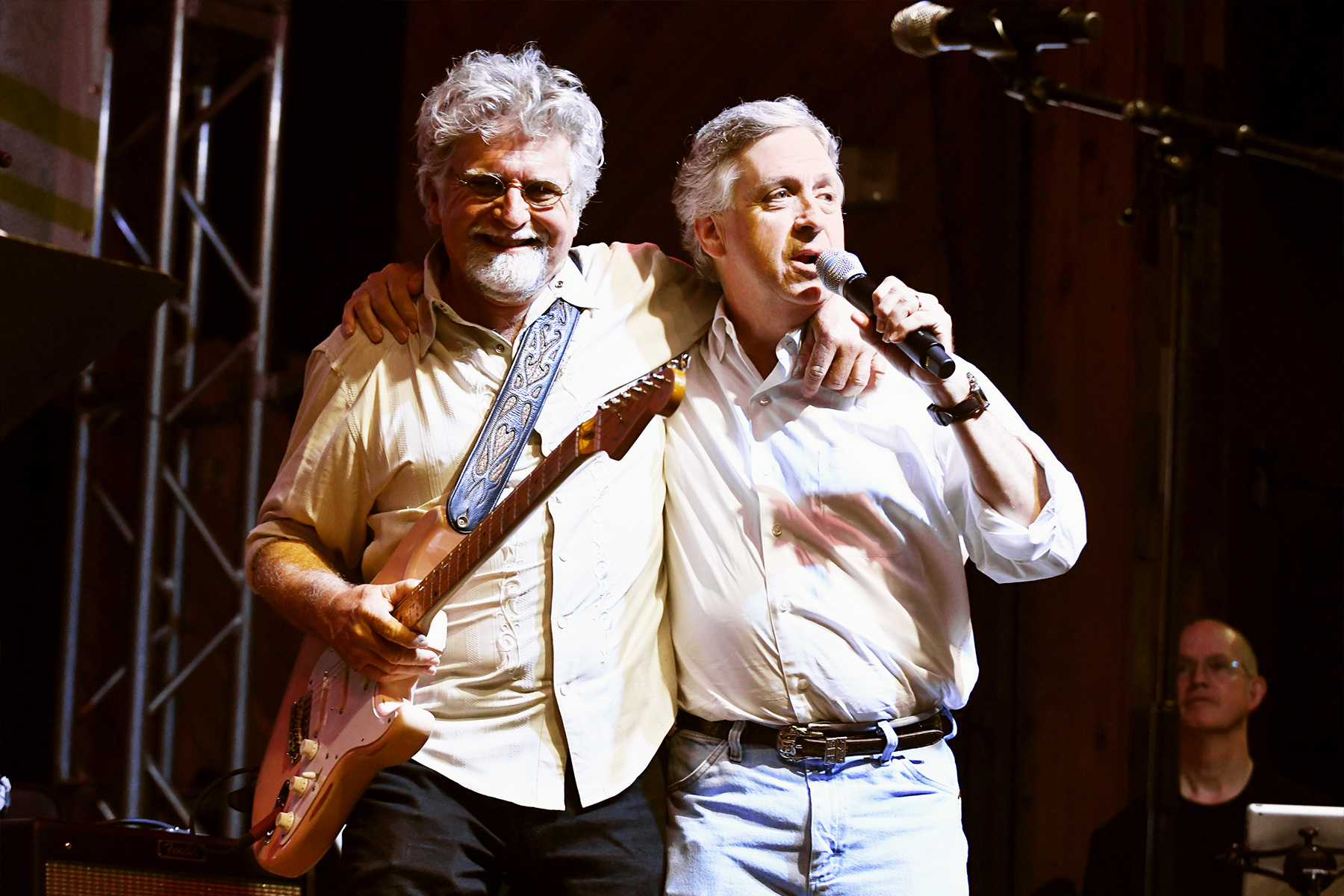 After a year of voice lessons and assembling an all-star group of musicians, Ewing was ready to make his debut. He negotiated with The Rustic in Dallas, promising to fill the house with his friends and colleagues. And on June 7, 2017, Fin Ewing and the Wrong Direction—the band’s name, a play on the boy-band One Direction, was coined by pro-golfer Ryan Palmer—performed for more than 2,000 people.

The band ran through a set list of classics, from “Travelin’ Band” by Creedence Clearwater Revival to “The House Is Rocking” by Stevie Ray Vaughan. Ewing intended for that to be his first and last performance, but after winning over a packed house and clinching his family’s support, he decided that singing in a band was too much fun to give up.

The band, which has grown to 23 members and includes a brass section and gospel choir, now has a standing annual gig with The Rustic. It performed again earlier this year, this time adding a fundraising component for Genesis Women’s Shelter. The group also played at the Dallas Country Club, and there are plans for more performances in the future.

Fortunately, with Finley broadening his role in the family business, Ewing will have more time to pursue his passion. “I wish everyone could feel that feeling—when you’re standing on a stage, and people are singing and dancing and standing on their chairs,” Ewing says. “It has just been a blast.”