In Iraq, where his company is a major contractor for the U.S. Defense Department, Fluor Corp. chairman and CEO David T. Seaton recalls watching tracer rounds shooting across the night sky in Baghdad. In New Orleans, where Fluor dispatched 250 people to help in the recovery effort after Hurricane Katrina, Seaton surveyed the devastation from a helicopter. And, at an open-pit mining project high in the Andes mountains between Chile and Argentina, he supervised the work while breathing with the help of a portable oxygen tank.

“There are very few places I have not been,” Seaton says—and that’s not an idle boast. If you were asked to cast the 53-year-old chief executive in a famous Hollywood movie, in fact, his most natural role would be as the adventurous, analytical star of the Indiana Jones flicks.

As the CEO of Irving-based Fluor, a publicly traded, global engineering and construction firm with about 40,000 employees, Seaton oversees the largest construction company in the Fortune 500, and the 109th largest firm on the list overall. The 103-year-old company, which boasts 72 global offices on six continents, provides services like engineering, procurement, construction, maintenance, and project management on a massive scale—and in far-flung locales, under the harshest conditions imaginable.

On any given day, Fluor will be planning, building, or procuring for about 1,000 projects in all. Its client roster includes large, legendary multinationals like Irving’s ExxonMobil, Chevron, and Dow Chemical, but also government enterprises ranging from the royal House of Saud to the China National Nuclear Corp.

In 2014, Seaton’s company collected $21.5 billion in revenue and booked new projects worth $28.8 billion. Most of those new awards were in Fluor’s oil and gas segment, which accounts for the lion’s share of its workload. Along with California’s Bechtel Corp.—a private construction and engineering giant with nearly $40 billion in 2013 revenue, according to Forbes—observers say Fluor dominates a space where rivals quickly become much smaller in size and more diffuse in focus.

“Fluor is in a class of its own, with few peers, with the exception of Bechtel,” says Pete Patel, CEO of Chiang, Patel & Yerby Inc., a Dallas-based engineering firm. “In my opinion, Fluor is more diversified and more capable of managing cutting-edge projects never done before—the difficult and complex that few can touch.” Says Seaton: “This company has provided a gift, if you will, for people who will go and do it. … There is hardly a corner of the earth where our footprints haven’t been left. I’ve always had the wanderlust, ever since I came to Fluor.” 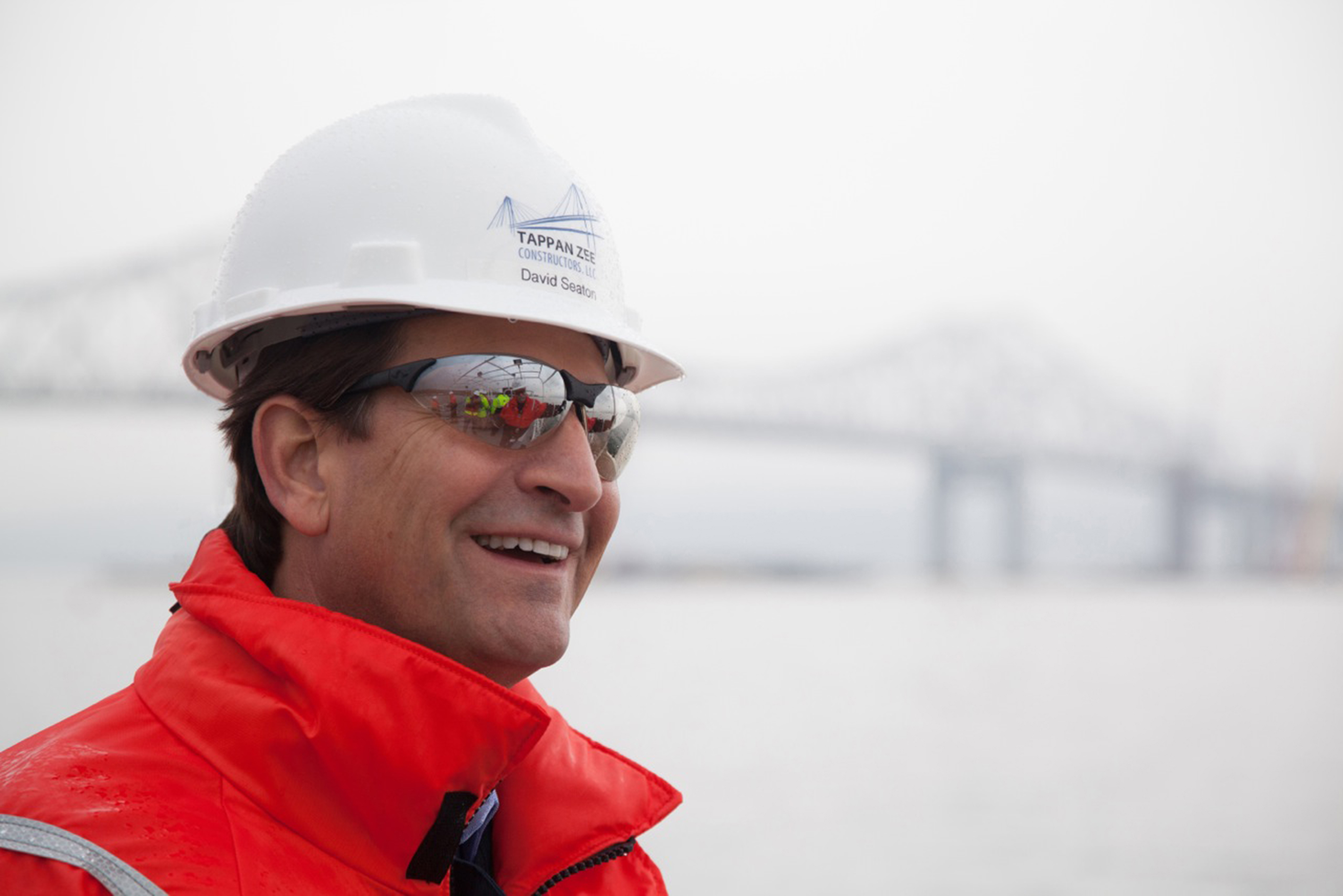 SPANNING THE GLOBE David T. Seaton has been CEO since 2011 of Irving-based Fluor Corp., which specializes in massive construction projects around the world like the signature span of the rebuilt San Francisco-Oakland Bay Bridge.

Seaton joined Fluor in 1985, shortly after earning a bachelor’s degree in international business from the University of South Carolina. He arrived after seeking out a job at Daniel Construction, a Fluor entity, because he needed cash after getting married. “I thought I would be at Fluor a few years, and then figure out what to do with the rest of my life,” Seaton recalls. “Thirty years later, I’m still here.”

He says he never saw an office during his first two years with the company. Instead, he was sent to visit various project sites, a nomadic lifestyle he found “intoxicating.” For years, Seaton says, he was similar to “Mikey,” the shaggy-haired kid from the iconic Life cereal commercials in the 1970s: “In a lot of ways, I was Mikey for a long time. ‘Give it to Mikey; he’ll eat anything!’ I would go and fix the problem, do the hard stuff.”

Over the years Seaton served in a number of sales and operations capacities for Fluor, and he rose steadily through the ranks. Among his jobs along the way were senior vice president and group executive for Fluor’s global corporate sales function; and senior group president over the energy and chemicals, government, and power groups. His last post before becoming CEO in 2011 was as chief operating officer.

His predecessor as chief executive, Alan Boeckmann, had also served as COO before moving into the company’s top job. Seaton credits Boeckmann, who allowed him to assume increasingly responsible management positions, for his ascension to the corner office. Fluor’s current COO, Peter Oosterveer, describes Seaton as a “highly networked,” commercially astute global citizen—an inclusive “team builder” who’s both hands-on and hands-off in his management style. While the CEO obviously knows the business inside and out, Oosterveer says, Seaton can also “let go” and allow for necessary changes to be made.

In a company like Fluor—where the typical project for a client averages 30 to 36 months—team-building and adaptability are critical. Once a project is completed, the team disbands and is directed to a new one. “That means that every two and a half to three years, we are virtually a different company,” Seaton says. “You are always re-creating yourself in this business. That personal relationship has to be part of the DNA to motivate people to perform across the planet for clients, and for partners to depend on us, and vice versa.”

Indeed, Seaton adds, developing and nourishing relationships are key. However, “it’s a relationship based on performance: If you are not performing and delivering, then the personal relationships do not really matter,” he says. “Our business is based on whether clients trust us to perform the hardest jobs in the toughest places, and protect their capital.”

From the Jungle to the Outback

He’s not kidding about the “toughest places” part, either. And, the CEO and the global company that operates in those places are inextricably linked. During his three decades with Fluor, Seaton seemingly has seen and done it all, working on projects from the jungles of Indonesia and the Australian outback to the frigid North Pacific waters of ExxonMobil’s Sakhalin island project at the far eastern end of Russia.

There, in a place where temperatures can plummet to 40-below, Fluor needed to build a “water crossing” for an underground pipeline to connect a bay, without disturbing one of the largest breeding grounds of the sperm whale. Because environmental sensitivity is a must with such projects, Seaton, then running the company’s oil and gas division, recalls, “We helped freeze the water early, cut huge ice blocks, and then cut the plankton out of the bottom [of the ice blocks] and set it aside. We then buried the pipeline. Later the plankton was returned for the whales, as the ice blocks were placed back to melt at the proper time.”

The Middle East is a major market for Fluor, and Seaton lived in Saudi Arabia from 1995 until 2000. While the country has historically been an oil and gas mecca for the company—in 1976, for example, it was awarded a $5 billion project to design facilities to capture so-called sour gas for Saudi Aramco—Fluor also manages a large Saudi aluminum manufacturing facility and is building one of the world’s biggest phosphate mines there.

But, living overseas has brought some personal challenges as well. Twenty days after Seaton relocated to Saudi Arabia with his family—his oldest child was in the first grade; the youngest was six months old—the Khobar Towers housing complex near the Saudi Aramco headquarters was bombed in a terrorist attack, killing 19 U.S. servicemen and wounding nearly 500 people. Seaton says it was difficult explaining to his 6-year-old daughter why there were mirrors under their car and why it was necessary for men to routinely search her backpack.

In Mongolia’s remote Gobi Desert, where temperatures can hit 110 degrees or higher, Fluor worked on the $6 billion Oyu Tolgoi copper mine. The mine, one of the largest of its kind in the world, was an extremely challenging construction/engineering project. Seaton visited the project as COO and says, “The main shaft [of the mine] is the tallest structure in the country. Fluor helped develop the mine, along with the original owner, into a bankable project. That [was] economic development.”

Because so much was at stake economically, the Mongolian government wanted to ensure that corruption was not embedded in the mine project. So Fluor and the new owner “followed the dollar, making sure funds were not getting into the wrong hands,” Seaton says. Unfortunately, global corruption—such as bribery in the awarding of contracts—is one of the biggest challenges faced by Fluor and others in its industry. So Seaton has played an important role in the company’s ethics, compliance, integrity, and anti-corruption efforts. He’s active in the World Economic Forum’s Partnering Against Corruption Initiative (or PACI)—Fluor helped launch the initiative in 2003—and, last year, he helped create something called the PACI Vanguard, a group of global CEOs from leading companies. Recently, an organization called Transparency International recognized Fluor for its leadership in international anti-corruption efforts.

While Seaton has a firm grasp on the economics, intricacies, and geopolitics of massive construction projects, he’s also said to have a sensitive feel for Fluor’s employees and their needs. HR consultancy Aon Hewitt honored the company last year for its leadership development programs. And, for four straight years, Fluor has been recognized by Fortune as No. 1 on its World’s Most Admired Companies list in the engineering and construction category. Seaton points out proudly that a Fluor employee named Joe Counts, whom Seaton worked with for 25 years, was just awarded a “50-year service pin” during a town hall meeting at a Dow-Fluor project on the Gulf Coast, with 2,000 people attending. Seaton and the company also pride themselves on giving back to the communities where Fluor employees live and work. In Dallas, for example, Seaton is active with the Boys & Girls Clubs of America and the United Way. In March, it was announced that he will serve as the United Way of Metropolitan Dallas’ 2015 Annual Campaign chair.

In the coming decades, Fluor and its CEO see especially promising business prospects in three areas: oil and gas, nuclear energy, and infrastructure development. The latter is touted as a tonic for economic growth and employment by governments and policymakers in both developing and advanced countries, including the United States. It’s estimated, for example, that billions of dollars could be spent annually to replace America’s aging bridges over the next several years.

And, Fluor has considerable experience building bridges. Besides completing the signature span of the San Francisco-Oakland Bay Bridge, which had collapsed in a 1989 earthquake, Fluor is designing and building New York’s $3.1 billion, three-mile-long Tappan Zee bridge, the biggest single bridge project in New York history. Closer to home, the company and its partners are delivering on the Horseshoe Project, intended to improve mobility along Interstates 30 and 35-E near downtown Dallas, including construction of another Santiago Calatrava bridge.

Over the last decade the U.S. shale oil and gas revolution has created new business for Fluor and, despite recent lower oil prices, that’s expected to continue. “We see a great opportunity in terms of natural gas,” Seaton says. “There are three new large-scale petrochemical projects in the Gulf Coast.” While this first wave of projects in petrochemical and liquefied natural gas plants is already on the company’s books, a second wave is also coming on the Gulf Coast in refinery expansions, chemicals, and gas-to-liquid plants.

Wherever on the globe future prospects are brightest, it’s a sure bet that Seaton—like the movies’ Indiana Jones—will embrace them on behalf of Fluor with daring, optimism, and smarts. “This duty is ingrained,” he says. “We know we will be gone one day, and the company has to move forward. I expect the next 100 years to be just as successful as the last 100.”

THIS NICE BUILDING IS ILLEGAL