When Ashlee Hunt Kleinert told her father four years ago that she wanted to start a food-truck business, Ray L. Hunt couldn’t believe what he was hearing. At first he thought she was talking about those vehicles that visit construction sites and sell frozen and prepackaged foods. Hunt, heir of oil tycoon H. L. Hunt and CEO of Hunt Consolidated, knows the energy business inside and out. But a restaurant on wheels? What was that? And why would anyone stand in line instead of going to a brick-and-mortar restaurant for a nice meal?

Kleinert’s father wasn’t the only one who wondered why the mother of three wanted to get into the food-truck business. A graduate of Southern Methodist University, Kleinert had never taken a business class. Still, the energetic blonde had founded an events company (In Any Event) and co-founded a nonprofit (Executives in Action). She was inspired to get into the business after hearing at an events convention that food trucks were projected to become a hot new trend.

As it turns out, Kleinert had excellent timing. Ruthie’s Rolling Cafe hit the road in August 2011, right when the food-truck scene was just about to explode. The blue and pink truck bears the name of her grandmother, Ruth.

“Grilled cheese is something I made at my grandma’s house all the time,” Kleinert says. “I’d go over there and spend the night and we would just sit around the kitchen. It’s an homage to her.”

About a year after launching, the food-truck business was going so well, Kleinert phased out In Any Event to focus on her booming truck yard. Another grilled cheese truck and Ruthie’s Rolling Crêperie, which serves both sweet and savory crêpes, were added to the fleet. On any given day, they can be found parked at Klyde Warren Park, the Dallas Arts District, Southern Methodist University, the Highland Park town pool, and other spots. Annual revenue is up to around $750,000, and Ruthie’s Rolling Cafe now has 16 employees. 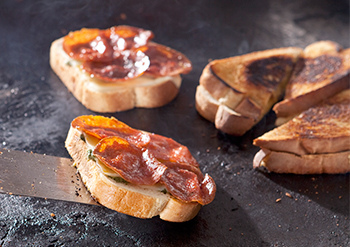 MEALS ON WHEELS: Along with two food trucks that sell gourmet grilled cheese sandwiches (above), Ruthie’s has a third rolling restaurant that serves sweet and savory crêpes. Photography by Justin Clemons
Photography by Justin Clemons
Marketing director Robin Skinner says she books between 15 and 20 events per weekend for the fleet of rolling restaurants. “We didn’t really realize how big the food-truck business could be and how it was taking off,” she says. “We were one of the first five food trucks in Dallas. The demand was so great, the very first day we had the food truck, the phone started lighting up, going crazy. And we have not taken a day off since it started. There is never a day that we do not have a booking.”

Kleinert is among the few women who operate food trucks in Dallas. Her Addison office is girly and cozy, with zebra-striped ottomans, multicolored doors, and chandeliers. It’s also where Kleinert manages Executives in Action, which she formed with her husband, Chris, in 2009. The group matches up out-of-work C-level executives with nonprofits, who pay the execs a small stipend for their work on short-term projects. Kleinert says it’s a win-win for all involved; the nonprofits get high-level expertise at a reduced rate, and the unemployed executives keep busy while helping worthy organizations.

Along with Ruthie’s and Executives in Action, Kleinert also serves as chair of the Dallas Women Foundation’s board of directors. Written on a dry erase board in her office are the words, “Best Before Bigger.” It’s the model she lives and works by.

Not long ago, a friend of Kleinert’s sent her a photo of her father, Ray Hunt, standing in line at Klyde Warren Park for Ruthie’s grilled cheese sandwiches. “Is this your dad?” asked the friend. “It is!” Kleinert replied. The same man who, at the beginning, didn’t understand why anyone would patronize a food truck, stood in line 20 minutes for a grilled cheese sandwich.

“He wouldn’t go up to the front because that’s the way he is,” Kleinert says. “Now he’s sold on [the concept]. He just wanted Ruthie’s for lunch.”