For about a year between 2010 and the first part of 2011, Jay Ellis kept asking himself if he was missing something about the market for recreational ranches in the western United States. Like most forms of real estate, those properties—also called “trophy sporting” ranches—went through a boom and a bust between 2002 and 2008. Prices skyrocketed as investors used debt to snap them up. Then, when the bubble burst, many investors had to surrender the properties to lenders because they couldn’t make the mortgages.

The market for big Western sporting ranches was frozen between 2009 and early 2011, with would-be buyers sitting on the sidelines and would-be sellers deluded into thinking they could still get pre-bust prices. Which brings us back to Ellis. The former Dallas manager of the equities sales desk at Morgan Stanley watched as the market slowly thawed, leaving a number of great ranches available at 2002 prices. Was he just missing something? No, it turns out, he wasn’t. It was time to act.

Today, Ellis runs Dallas-based Sporting Ranch Capital Management LP, one of only a handful of private equity firms nationwide that specialize in buying broken-down ranches, fixing them up, and selling them at a profit. Since its launch in June 2012, the firm has acquired four ranches, one each in New Mexico, Colorado, Utah, and Idaho. Two other deals—in Montana and Idaho—are in the works. After making one of those buys, Ellis plans to close his first investment fund, worth $30 million, and kick off a second, targeted at $50 million. He doesn’t think he’ll have much trouble raising the second fund. After all, Texas energy legend Boone Pickens was an investor from the outset, when Ellis had only an idea. 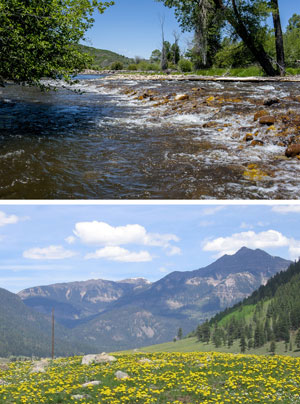 SCENIC SITES: Sporting Ranch Capital invests in properties like Freestone Ranch in Utah, above, and Hidden Lake Ranch in Colorado, below.
An avid quail hunter and outdoorsman, Pickens has built his land holdings nationwide to roughly 68,000 acres. He has also sold a total of nearly 100,000 acres of ranch land over the years. “I improved them, sold them, and they were all profitable deals,” he says. “The owners are all very happy with them.”

Sporting Ranch Capital’s model differs a bit from what Pickens successfully used on his own, but not by much. “We’re in total agreement on the types of properties to buy,” Pickens says. Relying on a network of contacts such as community banks, land trusts, and brokers, Ellis finds ranches of between 200 and 1,000 acres that he can purchase for $2 million to $8 million. Sporting Ranch buys ranches only in six states: New Mexico, Colorado, Idaho, Montana, Wyoming, and Utah.

Ellis redevelops Sporting Ranch Capital’s properties, spending between $200,000 to $1.5 million per ranch on things like adding lakes and improving streams that run through the properties, removing any eyesores, and installing amenities like skeet-shooting ranges. After roughly a year improving each property, Ellis aims to unload them for between $2.5 million and $15 million.

Sporting Ranch Capital is already close to producing returns for the 15 or so very wealthy individuals (most are Texans) who ponied up for the first fund. With ranch prices firming midway through 2013, Ellis recently put the 518-acre Chama Ranch, located on the northern New Mexico border near Colorado, on the market. He had acquired it last December.

All told, Sporting Ranch Capital’s financial projections call for an internal rate of return in the “high teens,” Ellis says. However, those projections assume that the economy will flatline over the next five years. Should inflation pick up, the IRR could climb to become “very significant,” Ellis says. “Hard assets are a safe haven in an inflationary environment.”

The market is expected to become more competitive. Wayne Halvorson, owner of Oklahoma-based Elite Ranch Consulting LLC, says more people have money to spend through opportunities like the oil boom in the Midwest and Canada and the increasing use of farmers’ corn for ethanol. Many with newfound wealth are looking at buying ranches both as investments and as recreational havens, Halvorson says. Foreign investors are showing interest in U.S. ranches, too.

“A lot of people looking at investing in the ranching market are looking at properties where they can get in and don’t have to put a lot of money in,” Halvorson says. “They can hold them and increase their value.”