David Mitchell was driving on Interstate 635 in his Mercedes-Benz, certain he was about to die. He was seeing stars. When he looked in the rearview mirror, his face was ghostly pale. Mitchell pulled off the road. In that panicked moment he called his mother, so someone would know where to find his body. At her urging, he made arrangements to get his blood pressure checked. His Systolic number was over 210, very severe. Mitchell was working as a residential real estate investor in Las Colinas, making between $30,000 and $50,000 a month. He worked long hours in a stressful job, and it was killing him. “What’s the point in all this, if I’m dead?” Mitchell wondered. “I’ve got children. I’ve got a life outside work. But I’m neglecting it, because of work.”

Two weeks later, Mitchell shut down his business and bought 317 acres in Whitewright, northeast of McKinney. The land included a dilapidated house. He also bought some Arabian horses, which he had admired in a magazine. Mitchell had no clue what he was doing.
That was 14 years ago. Today, things for Mitchell are much different.

On a recent morning, a small group arrives at his place in Whitewright called the Sleepy Sheep Ranch. They mill around the remodeled house waiting for the trail ride to begin. It’s sunny, and there’s a light breeze. Two boys are kicking a soccer ball back and forth. A radio plays Billy Currington’s lazy country ode, “Pretty Good at Drinkin’ Beer.”

A collage of animal sounds emits from behind the house—horses, sheep, dogs. A girl in a pink hoodie struggles to straddle her horse. The ranch hand, a young boy named Dakota, waits patiently, holding the reins. Mitchell comes outside and the group gathers around him. The harried real estate investor is long gone. Mitchell now has the solid natural build of a person who works outside. He speaks with the earnestness of a convert, talking in small-town clichés and Texan aphorisms.

“I learned what character and integrity is really all about out here,” he says. “When a man shakes your hand—and this is something I had to learn, because I abided by contracts in the city—out here, you shake somebody’s hand, doggone it, you better do it.” 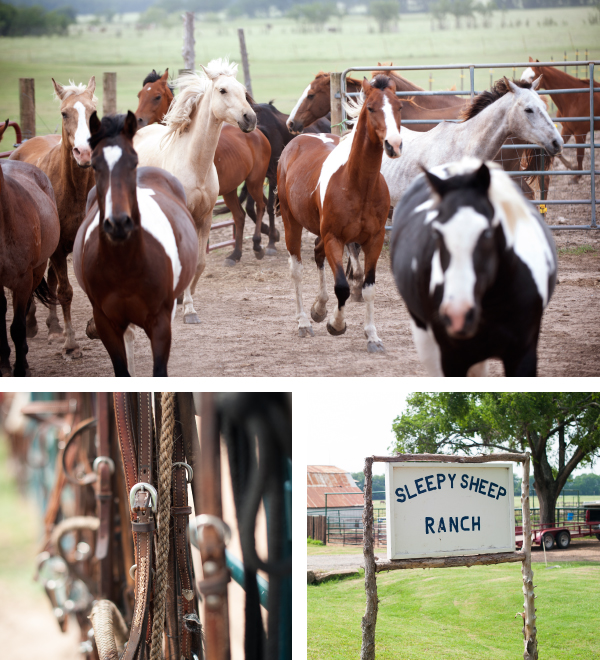 Scenes from Sleepy Sheep Ranch in Whitewright. Photography by Elizabeth Lavin & Sheryl Lanzel
Photography by Elizabeth Lavin & Sheryl Lanzel
At Sleepy Sheep, Mitchell started something called the “City Slicker Round Up,” where visitors learn how to move longhorns from pasture to pasture. Then they take a three-hour trail ride with an on-site dinner that includes a bottle of wine. Afterward they can have a free wine tour and tasting at the Lenoir-Sage Vineyards in nearby Bells.

“This thing grew way more than I ever anticipated,” Mitchell says. At first it was just two people coming out for a ride. But soon, the trail rides expanded to a dozen per trip. Mitchell decided to limit the group size to eight to 10, to “make it a little more fun.”
His business also expanded to selling all-natural grass-fed lamb meat. He’s running a national ad campaign and remodeling a building in town to accommodate the growth. Through it all, he’s kept his business plan simple.

“My philosophy is this: I want to do something that I love,” Mitchell says. “If I don’t love it, I’m not doing it. It’s a change of mindset coming from an entrepreneur, because people think they have to do something to make a living. Well, then you become a slave to whatever it is.”
It’s hard not to be charmed by the mythology of how everything came together—a man who exchanged Irving for Whitewright, a Mercedes-Benz for a pickup truck, who saved his own life by leaving a fortune behind and finding something greater.

Dakota leads the group across the road. The girl in the pink hoodie is having trouble. Her horse stalls, chewing on grass, not responding to the girl’s pleas. Mitchell jogs over to the horse. He grabs the harness and guides the horse into line. Everything is back on track. Mitchell watches the group ride off along the trail, smiles and shakes his head with amusement. “I love my job,” he says.