WHY CHARLIE PALMER: Don Draper would feel right at home at Charlie Palmer. One can picture the Mad Men rogue working his second of a three-martini lunch amid the sharp pin-striped silhouettes that populate this effortlessly sleek steakhouse. Walnut surfaces backlit with amber. Butterscotch leather. Silver accents. Much like the suave Draper, it’s a handsome profile befitting the 1920s elegance of the Joule hotel, within which the restaurant is housed. Primarily a steakhouse, Charlie Palmer could easily fall into the clichés that plague similar Dallas carnivore emporiums: either go big and over the top (III Forks) or keep it formal and old school (Capital Grille). Rather, Charlie Palmer is cut from a different natty cloth. Restraint and style are the stars, making this downtown restaurant the epitome of business lunch civility.

WHAT TO EAT: It’s easy to get caught up in the sensuous trappings and ease of Charlie Palmer. But good looks can only get you so far, and executive chef Scott Romano has proven himself one of Dallas’ top up-and-coming chefs. His assured menu indulges the carnivore in all of us, littered with steakhouse classics without becoming cliché. At lunch, that translated into a delicate filet mignon topped with a sharp blue cheese crust or marinated skirt steak with wild mushrooms and Anaheim chilies. 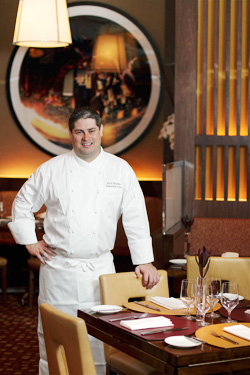 Chef Scott Romano photography by Kevin Marple
photography by Kevin Marple
Sides were lighter than one would expect: root vegetable chips, asparagus in brown butter and white anchovy, green beans with roasted garlic and fatback bacon. No potatoes au gratin or creamed spinach at Charlie Palmer for lunch. Likewise, those craving something besides steakhouse standards will be happy with Romano’s creative take on lighter sandwiches and salads. A spinach and arugula salad was dressed in sherry, marinated strawberries, and ramps, those delicious wild leeks. The Cuban press sandwich featured rich pork belly. Even the poached pear and Brie sandwich was a delicious vegetarian surprise.

Heartier main courses such as almond-crusted Scottish salmon and ricotta and mascarpone tortellini with pea shoots (yes, Romano even does Italian, and quite well) can be found on not only the regular menu but also on Charlie Palmer’s lunch prix fixe menu: three courses for $28, a real bargain. The restaurant also offers its “15-30” Executive Lunch: a daily selection of soup, salad, and petit sandwich for $15 served in 30 minutes. Both are delicious deals. But don’t neglect dessert. Pastry chef Ruben Torano’s selection of tarts—featuring rhubarb, fig pecan, espresso milk chocolate, and more—is a memorable sweet ending to an experience so suave and sexy you’ll be tempted to fire up a Pall Mall and bask in the culinary coitus-like afterglow. I’m sure Mr. Draper would approve.