In the cicada-ridden, sun-drenched climes of Lake Cliff Park, Vanessa Wilmore and a small cluster of volunteers—all wearing shirts emblazoned with the logo of the Black Panthers—hover around plastic tables stacked with cooler bags.

“We have Cajun chicken, spaghetti and meatballs, and chicken salad,” they tell the people who walk up. “How many do you want?” It’s Thursday, and Feed the People Dallas Mutual Aid is handing out meals to anyone who needs them. Inspired by the Black Panther Party’s survival programs, Feed the People launched a weekly Free Meals for All program in May.

It’s only a small piece of the mutual aid work the organization has been doing for more than a year. (It celebrate its one-year anniversary this June.)

Feed the People, a Latina- and Black female-led collective, provides free meals, groceries, hygiene products, laundry service, and medical care to houseless, food insecure, and otherwise underserved residents of Dallas-Fort Worth. On Saturdays, they partner with Oak Cliff Veggie Project for Cultivate the Community, where volunteers hand out fresh produce and dry goods to food insecure community members. On Sundays, find them with Say It with Your Chest DTX, a likewise–Black female-led leftist group, for Community Care Laundry Service, where volunteers wash clothes for houseless neighbors. 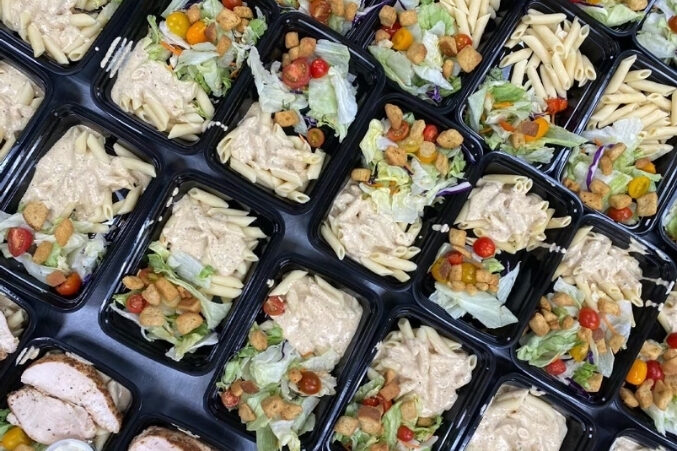 Thursday’s weekly free meal program is Feed the People’s latest community offering thanks to a partnership with local chef Andre Whatley, a personal chef who focuses on meal prep and private dinners. He founded his company Your Chef Dre about three years ago. Last year, he donated around 8,000 meals to those in need. This year, his goal is to donate 19,200 meals. Back around February, Whatley says, he told Wilmore he wanted to partner up to “really start feeding the people.”

Volunteers also deliver orders across DFW and take leftover meals to the Dallas International Street Church in South Dallas. Whatley preps and cooks the meals Thursday morning using donated ingredients, like leftover groceries from Feed the People’s food distributions and products he purchases from Sam’s Club and Restaurant Depot, Volunteers from Feed the People plate the meals and transport them to Oak Cliff.

Whatley wants to do this indefinitely. “If we can hit 19,200 meals a year for the rest of my life… We’ll change the world for real for real feeding that many people a year,” he says. “It brings joy to my heart. It’s not stressful. I’ve been the happiest I’ve ever been doing this—I’m glad that I can.”

When Wilmore was 18 or 19 she remembers working at a church nursery and wanting to give away free diapers. “Sometimes the parents would come in with the kids and not have diapers for them… I’m like, ‘That’s a basic human bodily function, and because of capitalism we have to buy diapers, and they can’t afford it.’”

Originally from Southern California, Wilmore began her political education and activism career organizing with Black Lives Matter Los Angeles and working with various mutual aid groups and political campaigns in the area. When Wilmore moved to Dallas in 2017, she knew she wanted to return to that same work. So Wilmore, a 26-year-old freelance home designer, founded Feed the People in early June 2020—in the midst of protests against police violence, systemic racism, and rampant racial and economic inequality. (She raised about $1,300 for the collective’s first project making care packages comprised of granola bars, water, first-aid kits, hand sanitizer, and portable chargers for protesters against police brutality.)

Wilmore had already been buying groceries for, and delivering them to, her neighbors—especially during the early stages of the pandemic, when many were hesitant to go to the grocery store. Sometimes she used her own money, sometimes her neighbors gave her money. Wilmore doesn’t mind pulling from her own wallet because that’s what mutual aid is all about: sharing resources and standing in solidarity with fellow community members. Whereas charity and nonprofit structure is vertical (moving money from the top to the bottom of a class-based society), mutual aid is horizontal (moving goods, services, and funds between members of a community). Charity reinforces the structure and power dynamics of a community. With Mutual aid, though, community members organize, educate, and create their own systems out of a shared struggle.

After a year filled with protests, elections, and historic winter storms, Feed the People is already looking toward the future. The collective is planning to set up community fridge in Irving and find a space for storage and retail. They’re also working to develop an app: Think Instacart but for mutual aid, where people can request things they need like food or cash.

“Marginalized communities have been struggling and have been going through it forever,” Wilmore says. “We need to come together even more, helping each other, but then also organizing and educating people on, ‘Hey, this is why this is messed up. Let’s not depend on these systems, and make our own systems.’”