As the syncopated sounds of Bach’s Concerto for Four Pianos echo through the studio, dancers move in tandem, their arms creating geometric shapes while the rest of their bodies remain completely still. As soon as you think you’ve figured out the pattern, they burst into larger movements, spanning the space in leaps and turns. At points they move together, like the mechanisms of an enormous clock. Then, one by one, the dancers break off, moving through the maze of figures in tricky combinations, only to rejoin the group as quickly as they had left. The piece is architectural, with formations that build upon each other, and dancers creating patterns—lines, circles, diagonals—each more intricate than the last. It’s like an enormous brain teaser, just fifteen minutes of attempting to guess what the dancers are going to do next and never being right.

This dance, “Local 126,” is one of the pieces that awaits audiences at the Bruce Wood Dance Project’s performance of All Bruce. This performance, coming to Moody Performance Hall on November 16 and 17, features four very different pieces all choreographed by native Texan Bruce Wood. The company, founded in 2010 after Wood’s first company in Fort Worth folded, usually performs a mixed repertoire featuring Wood’s work as well as pieces by other choreographers. However, All Bruce was specifically curated to display the diversity of the late choreographer’s work. When Artistic Director Joy Bollinger was arranging this performance, she chose four pieces that starkly contrast each other to better represent his long career of dance-making.

“You’ll see one dance, and the next dance will look nothing like that,” Bollinger says.

First on the program is “Local 126,” which was choreographed in 2001. Complex and architectural, “Local 126” was created just so Wood could challenge himself. He loved partnering, so he tasked himself to create a piece where the dancers didn’t touch at all. It’s almost reminiscent of old corps de ballet pieces, with all of the dancers moving completely in tune with one another. There’s a beautiful sense of connectedness and unity, even though no one ever holds a hand or does a lift. Created as an homage to the old stage union at Bass Performance Hall, this dance is meant to embody harmony and togetherness. The dancers wear khaki workmen shirts that they shed halfway through the dance, while motifs like long marches bring to mind that union spirit. Toward the end, all the dancers clear the stage except for one, who joyously covers the space in bounds and turns. Olivia Rehrman, a dancer in her third year with the company, takes on this role once performed by Bollinger herself.

“You know what Bruce told me about that solo? He said ‘Joy, just do it like you’re laughing,’” says Bollinger.

Rehrman says that not touching makes this piece harder. As a dancer, you have to have eyes on every other dancer in order to maintain the synchronicity that the piece requires. Going from that unity into her solo is one of the trickier parts.

“When you’re dancing with a group that long – the piece is 15 minutes – and then you’re the only one to come onstage, you have to be able to hold the audience’s attention. You’ve gotta take it up from where it was by yourself,” Rehrman says.

The next piece, “Echoes of Enchantment” was choreographed in 1999, with music by Randy Newman, Ennio Morricone, and Benoit Jutras. It has more of a storyline than “Local 126” does. This whimsical piece centers around two masked figures, a man and a woman, dressed in all black. The woman carries an umbrella and the man holds a single bright sunflower. It’s all about longing and missed chances, as the masked figures pass each other. Representing the emotions in the piece are dancers clad in bright yellow, who carry the story through this world of fantasy. There’s a huge juxtaposition between the dark and light colors as this fanciful tale plays out. 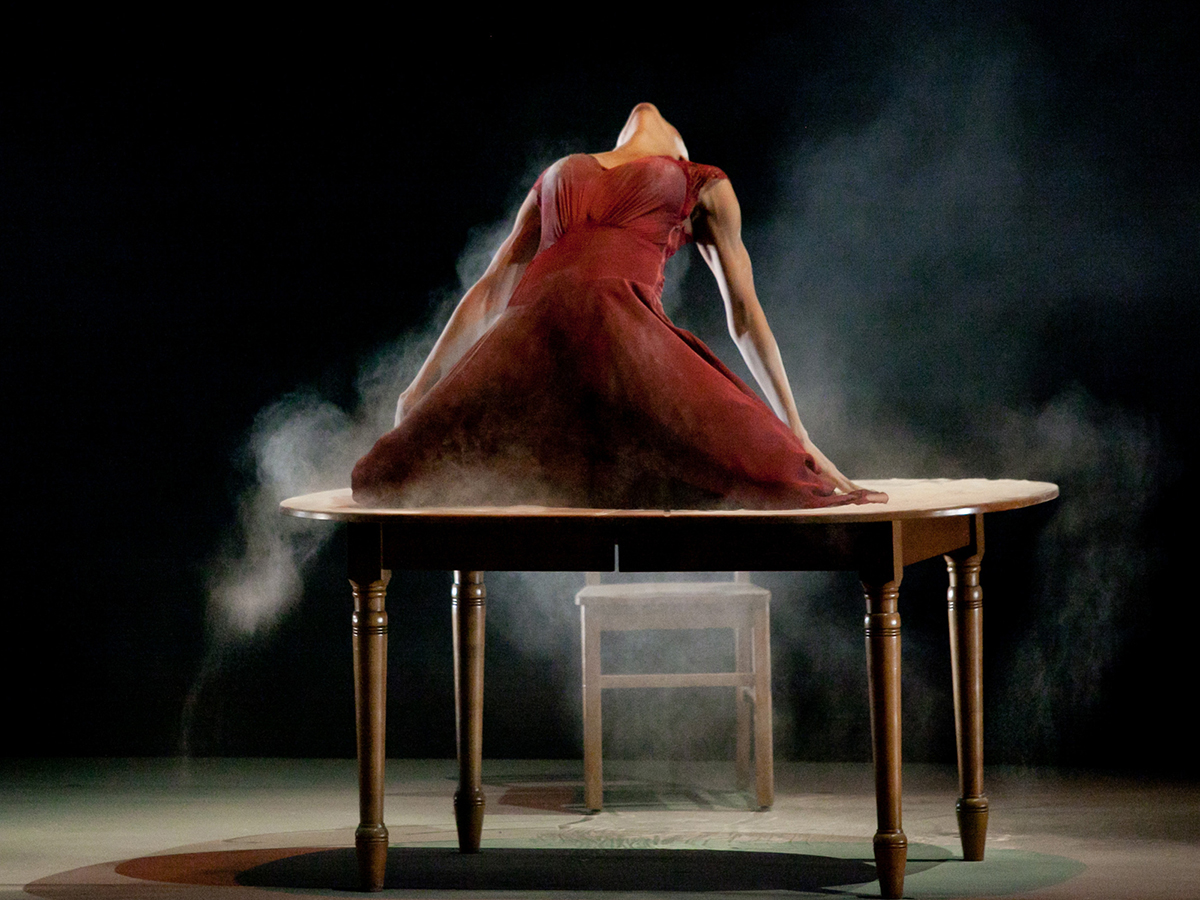 “The Edge of My Life So Far,” with music by Michael Nyman, is much more internal and emotional. Commissioned by Dallas Black Dance Theatre in 2010, this solo is performed by Nycole Ray, the Artistic Director of DBDT: Encore! Ray embodies stage presence. This is the youngest piece in the program, so it’s where you’re more likely to see the change in Wood’s movement style. Ray wears a dark crimson dress and plays with a table covered in white powder. As the piece progresses, the powder ends up everywhere—on her face, her dress, the floor. It’s incredibly powerful. She seems to be in contemplation, thrown about by her emotions, feeling everything incredibly deeply. She rolls on the table and casts out her hands, sending powder flying, she carefully stretches a finger across the surface of the table, she beats at the wood with her fists. It doesn’t take long before she is covered in white powder. As the drama builds, she begins to dance on top of the table. It’s a dance of palpable emotion, and the anguish that Ray portrays will bring you close to tears.

“Bolero,” the last piece on the program, is a different beast altogether. You can imagine that this dance takes place at two in the morning, long after everyone should have gone to bed. It is sultry and steamy, with the women scantily clad in lingerie-like black dresses, and the men wearing jacket-less tuxes. The backdrop and the curtain for the wings are flown out, so the audience can see the bare bones of the theater.

“‘Bolero,’ that’s just all about lust, and, you know, also kind of the opposite at the same time,” Bollinger says. “It’s like grabbing someone and pushing them away simultaneously.”

Watching this piece feels almost voyeuristic. There are figures who sit in the background for the duration who don’t even dance, they just watch the dancers as they push and pull at one another. It is beyond sexy and powerful. The choreography definitely includes the group dances that are a hallmark of Wood’s style, but as the piece progresses, the cast breaks off into trios and duos. Set to the music of Maurice Ravel, “Bolero” is all about relationships and the perversion of relationships, playing with the power dynamics on the stage.

“The women definitely hold a lot of power in that piece, they get to manipulate the men, play with them, draw them in, and then send them away,” Bollinger says.

That’s part of what makes this piece so fun as a dancer. “You get to be this character that most of us aren’t out in public. Or maybe not at all,” Rehrman says. “A lot of us girls [in the company] are pretty reserved, so I think we all kind of have fun getting into it.” 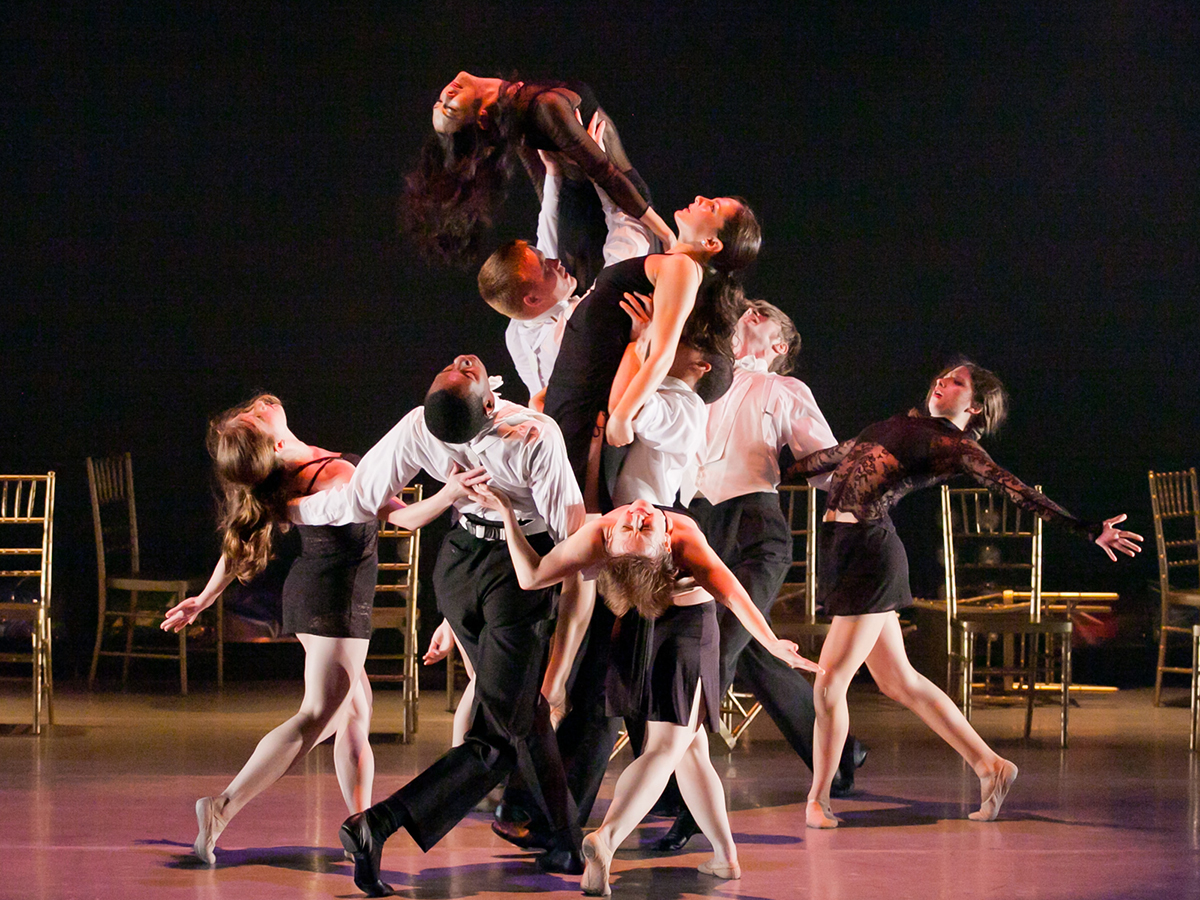 The variety in this performance is representative of the spirit that Wood brought to his company. Even though he passed away in 2014, much too young at 53, it is like he is still guiding the company. The dancers adopt his style of movement, and Bollinger finds that when she choreographs, she uses his vocabulary.

“A majority of my career was with him, and when I started choreographing I realized how much he’s the language I speak, how much his aesthetic is just in my physicality, and how I prefer to move,” Bollinger says. “So, it’s just a privilege and an honor to get to keep his pieces alive, because they are still relevant, and they are still poignant and powerful. And he had so many that it’s like reaching in a candy jar.”

Bollinger started dancing with Bruce in 2002 right after graduating from Texas Christian University with a BFA in Ballet. Back then, she was the newbie dancer, learning from people in the company who had been with Wood for years. But when Bruce Wood Dance Project started in 2010, she became one of the veteran dancers. Now, as the company’s Artistic Director, she continues his vision. All of the pieces are restaged by someone who danced under Wood, like rehearsal director Eric Coudron, or someone who learned it from someone who learned it from Wood. His company always emphasized the importance of the group, whether it was with the Fort Worth-based Bruce Wood Dance Company, or the Bruce Wood Dance Project. There is none of the typical ballet company’s hierarchy in this company – no principal dancers snubbing the corps de ballet.

“Bruce always said the most important thing in the company was the group, so that was number one, and the focus being on that instead of individual dancers,” says Bollinger.

Most of Wood’s pieces involve only 10 to 12 dancers, so the dancers must be able to work as a group, and stand out in their own right. This can be especially important in pieces like “Local 126,” where the group dances must be precise and coordinated, until each dancer breaks off into their own solo. All of Wood’s pieces combine the unity of the corps de ballet and the star power of soloists.“I think when I was hired, Kimi [Nikaidoh, now the Artistic Advisor] was directing at the time, and she said, ‘I need everyone I hire to be a soloist,’” Rehrman recalls. “To be able to hold the audience’s attention. The audience can see all of us, because there’s only a handful. It’s not like you blend in.”

You can tell that each dancer has star power, even when they dance in unison. The company members don’t look the same, body types ranging from a lanky man who stands at least a head taller than everyone else in the room, to a spritely woman who is just under five feet, to a muscular gentleman with a body type that would do very well on Instagram. This is not the cookie cutter dance company you are used to seeing, which is exactly what Wood wanted.

For dancers and audiences alike, this is very refreshing. Artistically, the dancers are challenged to be their best without the pressure to look a certain way. For audiences, it means that even though some of these pieces are nearly two decades old, they still look as fresh and modern as if they’d been choreographed yesterday. All Bruce on November 16 and 17 holds a treat for dance lovers and novices alike, as they take in four very different masterpieces from this incredible Texan choreographer.