Deep Ellum Art Co. is an ambitious new art gallery, bar, and performance venue that will try to connect the neighborhood's history to its future.
By Roderick Pullum | June 16, 2017|9:00 am
Advertisement
The past, present, and future of Deep Ellum are perpetual topics of discussion among Dallasites. This is especially true for those who are deeply entrenched within the local service industry, and the music and art scene. Many residents and those who frequent the historic neighborhood romanticize the past, debate the quality of the present, and lament changes on the horizon. Entrepreneur John LaRue wants to embrace change while preserving the essence of Deep Ellum, and hopes his new mixed-use venue, Deep Ellum Art Company, will do just that.

Plans for the facility at 3200 Commerce St. include an indoor and outdoor art gallery, a stage and sound system for live music, and a nearly 50-foot bar. The venue is scheduled open in July or August. The modest facade of the one story building, which was once a printing press repair shop, is deceiving. At first glance, one might not think the beige and brown brick structure built in 1955 contains 5,000 square feet, with about 10,000 exterior square feet behind the main building.

On a Friday afternoon LaRue and his business partners are knee deep in remodeling and renovations. A chaotic orchestra of hammers, electric drills, and colliding metal materials echoes throughout the building. Seated at a makeshift desk on the south end, where the stage will soon be, John LaRue talked about his vision for DEAC and his love for Deep Ellum.

“I’ve been coming to Deep Ellum since I was 12,” he says. “I was really into skateboarding and punk music. My sister used to bring me down here and I was like…this place really exists. I thought to myself these are my people. At last I’ve found somewhere that feels like home.”

LaRue, who is also CEO of So-Cal Tacos in Grapevine, first considered putting a new restaurant at the location. However, he felt an urge to build something more in line with the foundation of why he loved Deep Ellum. The physical state of the building at that time, which included a sign that said “Art Co.” above its doors, along with advice from his wife Kari, helped cement the vision. 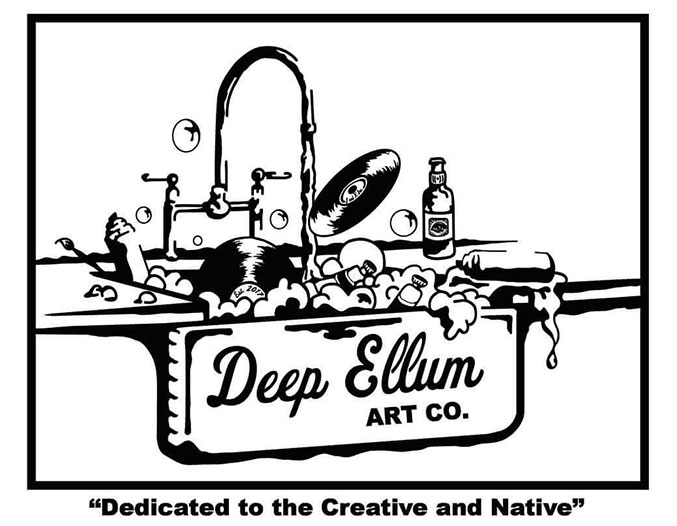 “At one point the sign on the building used to say Smart Co. I don’t know if someone stole the S and M because they were kinky or what,” LaRue jokes. “The Art Co. sign on the front of the building was enough to start writing the script for what we wanted to create. The only trouble I had was trying to think of a name. My wife Kari said keep the Art Company, put Deep Ellum in front of it and you’re done.”

LaRue is both passionate and guarded about some of the plans for Deep Ellum Art Company. The windows of the building are covered for security reasons, but also to prevent any previews of the venue before it’s complete. But LaRue is happy to share what DEAC has in store, and has already brought on artist Amber Crimmings to be the venue’s artistic director.

“This place will un-mistakenly represent Deep Ellum. We’ll have live music, food trucks, vendors, and our art gallery is going to be a popular platform for artist to sell their work,” he says. “The art yard is something that will take on a life of its own, constantly evolving. You’ll be able to come here on a Tuesday and see something completely different on a Wednesday. We have very lofty goals in that respect. I want to make sure this place is evolving the same way that Deep Ellum is.”

Deep Ellum will soon be flanked by two Westdale high-rise projects. The Epic, at the western entrance to the neighborhood, and the Case Building Apartments to the east. It’s understandable that new developments raise concerns about the identity of Deep Ellum staying intact. LaRue feels the changes to Deep Ellum are a good thing, but says there has to be a balance between improvements and preservation.

“I think there are a lot of people who have misplaced anger towards some of the changes being made in Deep Ellum,” LaRue says. “But if we don’t have the proper infrastructure and attention being placed on this neighborhood we’ll have an example of how it was circa 2000-2004. It’ll turn into a ghost town again. There’s safety in numbers. You have to have more residents and options for patrons to come here between the hours of dawn and in the evening, when most people show up to go to bars and concerts…I always want for Deep Ellum to have that edgy reputation it’s always [had], but I don’t want people to have to worry about walking back to their car at night. Nor do I want to worry about the safety of my employees.”

“We want this to be a cultural hub for and by the neighborhood.

Despite new alterations to the physical landscape, LaRue believes that if business owners and the artistic community do their part then the spirit of Deep Ellum will always remain. “Dallas is growing exponentially every day. With so many people moving here it’s important to maintain the history,” he says. “Deep Ellum isn’t anything without its history. If we don’t preserve that and bring the past into the present with us then it’s just another neighborhood. It loses the mystique that makes it special.”

One way Deep Ellum Art Company will bring the past into the present will be the “West Wall” mural project. As the name indicates, the mural will be located on the western side of the building’s exterior brick wall. The painting will be a large panoramic street map of Deep Ellum. It will include everything that currently exists, along with landmarks and venues from the past that are no longer in operation. “The mural will represent everything that is now and everything that was. I think it will be a good way to teach people who are new to the city about the neighborhood,” LaRue says. “I’m working with a couple of historians to make sure it’s as accurate as possible. I want to do black and white scale for all of the places that aren’t here anymore, like Clearview & Blind Lemon. Everything else will be in color. It’s also a way for us to acknowledge and wave the flag other businesses and venues.”

The team at Deep Ellum Art Company aspires to be more than just another art and live music venue. Their hope is to become part of the fabric that makes the neighborhood special, help sustain the careers of artist from all genres, and as their slogan says, remain “Dedicated to the Creative & Native.”

“We want this to be a cultural hub for and by the neighborhood for generations to come,” LaRue says. “Creating a foundation for artist of all genres to grow and being part of something bigger than me is important to me. Achieving that will be the true measure of success for this venue.”

Citing the economy and security concerns, the production company that produced the Deep Ellum Arts Festival for 28 years calls it quits.
By Bethany Erickson
Arts & Entertainment