Many North Texas leaders belong to country clubs—or something like them—that are carefully curated in membership, and prohibitively pricey to most all but the region’s 1 percent. These private clubs count as members some of the state’s most prominent investors, oil executives, athletes, real estate magnates, politicians, and political kingmakers. On the following pages we take you behind the mahogany doors of Dallas-Fort Worth’s most exclusive—and most publicity-averse—enclaves of the elite. These aren’t solely country clubs, to be sure, though access to some of the finest golf in North America is often one of the perks of membership. In addition to old-line golf clubs, we identified, for example, an über-ritzy residential development, where membership is won with the purchase of real estate on the prairie between Dallas and Fort Worth. We also included an office park—built on the red-bricked bones of an old public hospital—that’s more selective of its tenants than almost any of the venerable country-club bastions of Dallas society. In these posh clubs the key to access is not only money, but connections—and patience. In most cases, the members have all three. 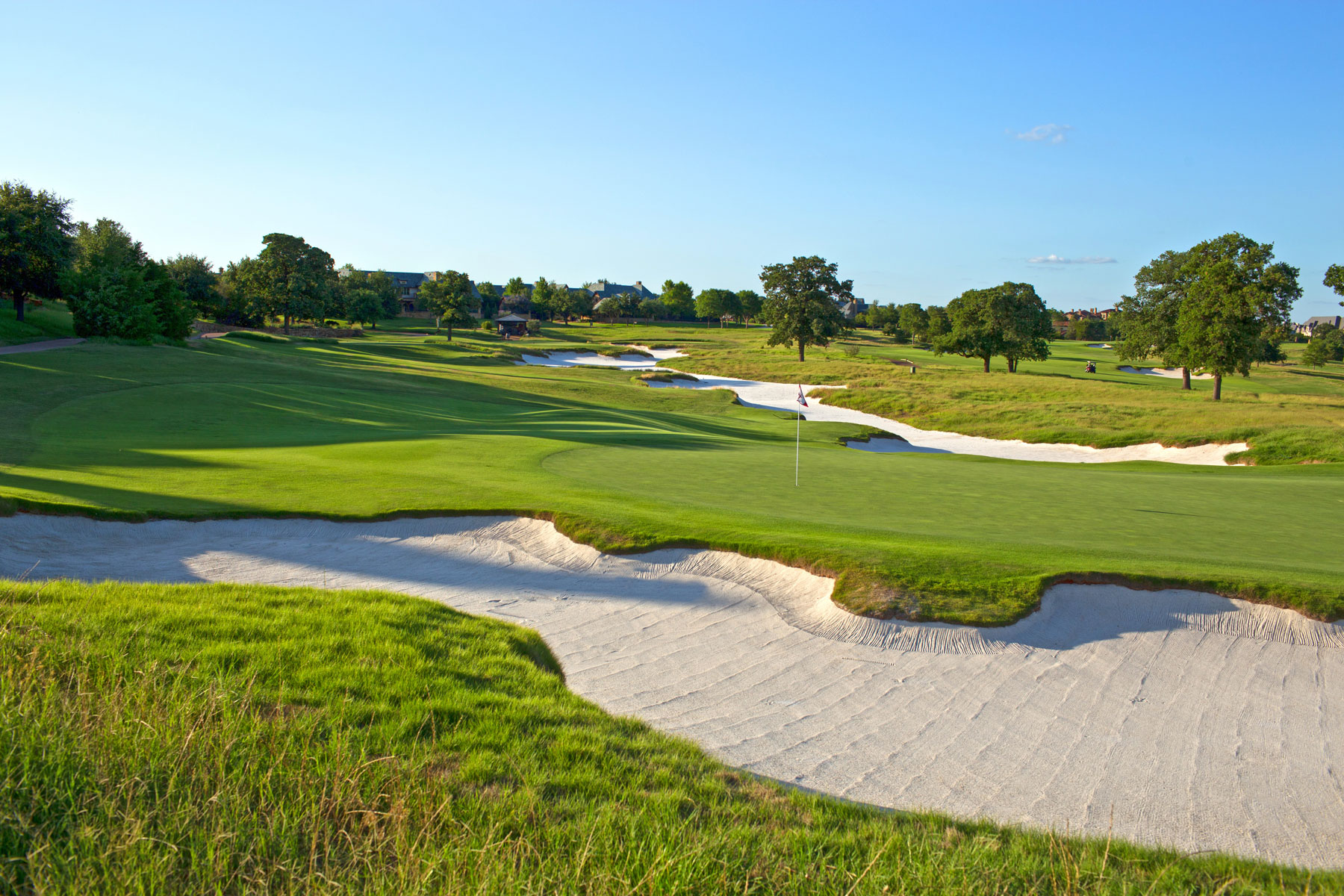 OCEANS OF GREEN: Golfing is a prime attraction at the upscale Vaquero Club in Westlake.

A ‘Bubble’ for New Money

There’s a reason why the 13-year-old community behind the 8-foot stone walls in Westlake is sometimes referred to as a “bubble.” A hybrid of a golf course, country club, and a swanky gated neighborhood, Vaquero is utterly self-contained, priced over the years to serve PGA tour champs, football greats such as Terry Bradshaw, and captains of industry like Matthew Rose, executive chairman of BNSF Railway. Here, every necessity or whim is catered to. Many of the community’s children go to school just up the road at Westlake Academy, a top-rated charter school. All conceivable requests are handled by a concierge service. They range from dry-cleaning pickup and delivery, meals, and a car wash to a ride to your child’s soccer practice or to DFW Airport (if you’re not taking your private jet, of course). Privacy and discretion are what the 350 owner-members here pay dearly for. At one time, the price for a golf membership at the Vaquero Club started at $60,000; these days an equity membership goes for $195,000, plus nearly $17,000 in yearly dues. That gets you a driving range long enough to hit inward from both ends; a lake stocked with bass, bluegill, and catfish; and a 33,000-square-foot clubhouse with a full spa and dining room. With homes priced in the seven figures at least, this is, without doubt, the richest enclave within what Forbes in 2011 deemed the most affluent neighborhood in the United States. But, members contend, Vaquero isn’t the WASP-y monoculture found in Dallas’ oldest and most venerated clubs. Vaquero wealth—Westlake wealth—by and large is new money. “Moving out here from the Park Cities area in Dallas, I never would have guessed that moving to Vaquero would provide more balance,” says Westlake Mayor Laura Wheat. “We are diverse. We are different ethnicities, different religions. The common denominator is that people have created their wealth themselves and come from all walks of life.” 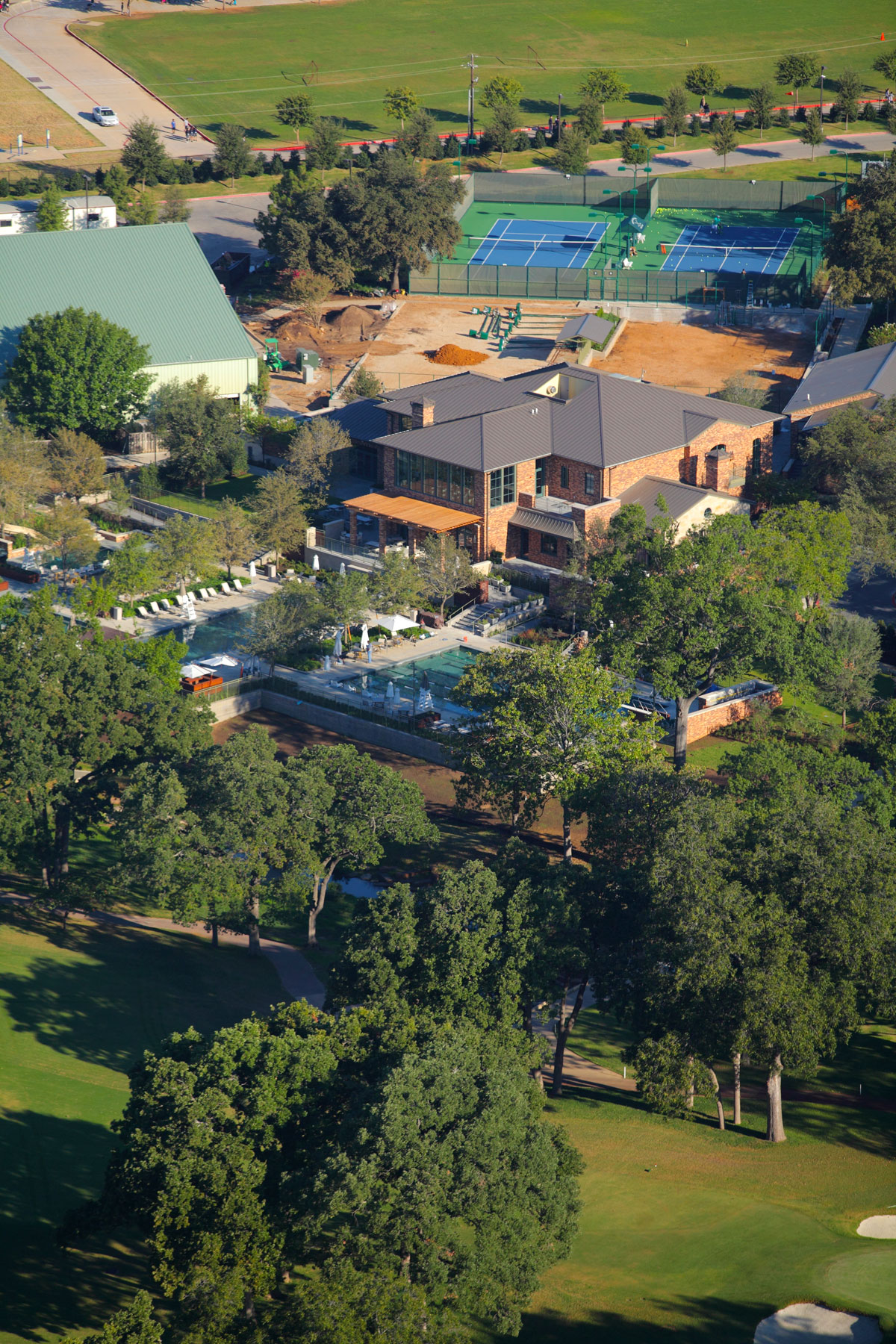 Stronghold of the Elite

You happen upon Dallas’ most prestigious country club in a most unlikely part of town—sandwiched between a seedy stretch of Harry Hines and Interstate 35E, hidden behind a curtain of brick and oak, just across the street from a car-title-and-payday-loan shop. But to the extent that Dallas has blue-blooded old money, this 94-year-old club—despite the humble surroundings—is its Valhalla. In contrast to the Dallas Country Club and its gleaming new facilities, the more modest Brook Hollow might best be described as “stately.” Its golf course is considered the superior one, a challenging layout with tree-lined Bermuda fairways, tight greens, and a seventh hole that Ben Hogan once described as the best in the country. The course pro has helped George W. Bush drop his handicap into the single digits, while the former president’s private security detail watches from the trees. Members at Brook Hollow consider the club their second home, often taking holiday meals there because the food is excellent and the management is attentive, gracious, and, most important, discreet. That, for example, is why the super-exclusive Sweetheart Ball, benefiting UT Southwestern Medical Center and attended by the crème de la crème of Dallas society, has been held at Brook Hollow for years. In the dining room and other public spaces at the club, unsuspecting cellphone users may be asked to put their phones away by a staffer presenting a small card bearing the request. As at the DCC, the price of entry here starts at $100,000, though one banker new in town is said to have ponied up three-and-a-half times that to join. If you can afford it, you’ll rub shoulders with a selective company that includes Ross Perot Sr. and his son Ross Jr., Tom Hicks, John Eagle, Carey Maguire, Jeremy Halbreich, Dee Wyly, and, perhaps surprisingly, flashy Dallas Cowboys owner Jerry Jones. Brook Hollow is the secret jewel of Dallas, embedded on the wrong side of the tollway. And if few know for sure what lies behind the trees and the brick, that’s just fine with the club’s members. 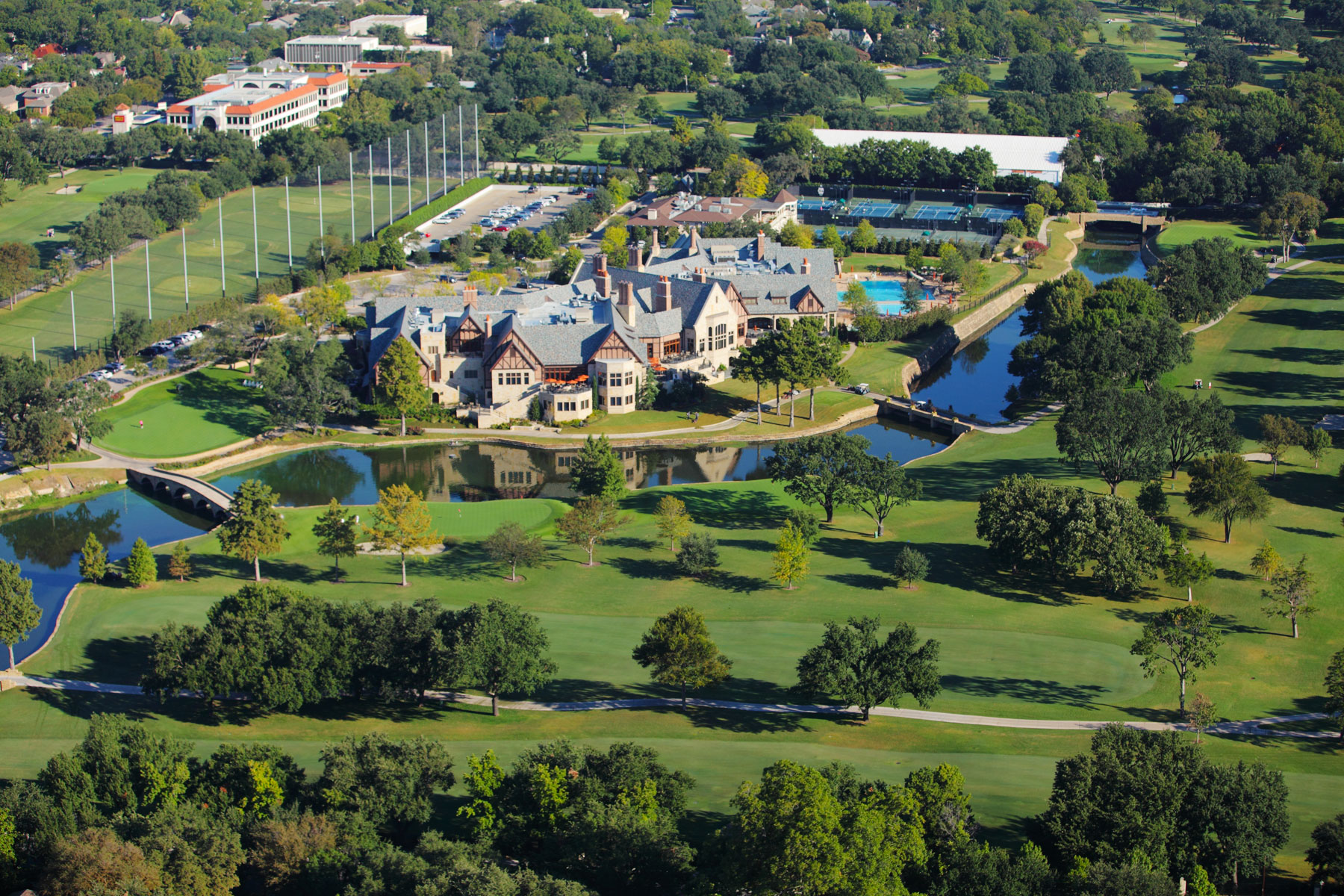 Situated on nearly 120 acres of prime real estate in tony Highland Park, the Dallas Country Club is the beating heart of North Texas high society. Over the years the club, founded in 1896, has counted among its members some of the most influential figures in the Southwest. Think A.H. Belo Jr., G.B. Dealey, T. Boone Pickens, Ray Lee Hunt, Forrest Hoglund, Gerald J. Ford, Don Carty, Lyda Hill, Erle Nye, and Ray Washburne. Prospective members don’t approach the club seeking admittance—they can only be invited in. Even then, it can take seven years on average for an application to wend its way toward final approval. And, it takes just two members to blackball an aspiring member. In the case of private-equity executive Kneeland Youngblood—the first local black member in the club’s history—the application process took 13 years. Controversy over the club’s largely Anglo tilt prompted former Dallas Mayor Tom Leppert to resign his membership during the 2006 mayoral campaign. The core of the club’s membership has become younger and more “tolerant” in recent years, but the shift could have as much to do with dollars as with social progress. A major renovation of the clubhouse and improvements to the grounds, including a new Olympic-sized pool, reportedly cost around $27 million. To bankroll the enhancements, a host of new members have been taken in. Some of the DCC’s panache has been lost in the process, some grumble, likening the club’s food now to what you’d find at a Luby’s and its management to a “ClubCorp operation.” Even so, initiation fees alone are pegged at upwards of $100,000—Youngblood reportedly paid $137,000—and one member says he forks over $600 a month in dues. To many at the DCC, that’s chump change. Stories abound of millions of dollars changing hands during clubhouse card games. One member is rumored to have bet—and lost—his car dealership. There’s a cost to doing big business in Dallas, and for many the cost continues to include membership at the prestigious Dallas Country Club. 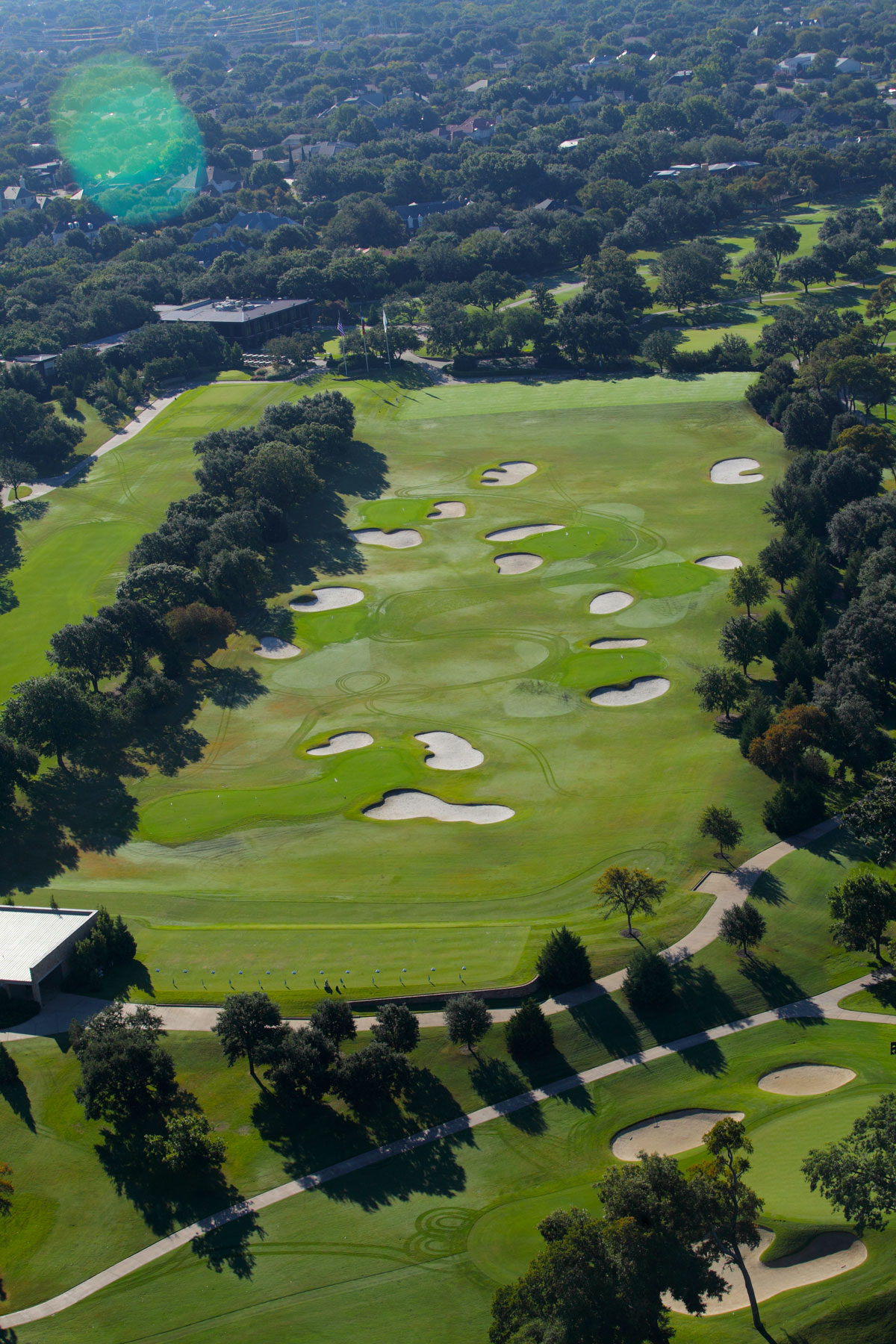 Inside the Boys’ Club

There are a few immutable rules you have to know about the Preston Trail Golf Club in Dallas. First and foremost, women are not allowed. As a general rule, in fact, they aren’t even supposed to enter the parking lot. Second, at the very least a towel must be worn around one’s waist in the dining room. (That rule alone gives you an inkling of the bawdy boys-club, locker-room atmosphere that prevails at Preston Trail.) Finally, if you aren’t old enough to drink bourbon, you won’t be golfing the club’s much-lauded 18 holes. This was at one point true even for local hotshot Jordan Spieth, who was denied access here for years, even as he played in the Byron Nelson Championship while in high school and became the youngest American to ever compete in the Presidents Cup. Once, Lord Byron Nelson himself was politely asked to depart for squiring a 17-year-old prodigy, Scott Verplank, around the course. In keeping with the spirit of these commandments, the raucous history of Preston Trail, founded in 1965, approaches legend. In the heat of summer, for example, former Dallas Stars players Brett Hull and Mike Modano are said to have played the storied course in nothing but their skivvies. Don Nelson, ex-Dallas Mavericks head coach, preferred playing his rounds shoeless. There are even tales of baseball great Mickey Mantle playing all 18 in the buff, and using his shiny Cadillac like some outsized golf cart. These days, you’re likely to spot notables on the links including golf’s Lee Trevino, football’s Troy Aikman, and former President George W. Bush. But, that’s only if a member of the club invites you onto the property. Membership itself comes at a premium—figures as low as $125,000 and as high as $250,000 are bandied about—and may take five years or more to attain, depending on the applicant’s wattage and connections. (Dallas Cowboys quarterback Tony Romo, it’s said, was recently added to the waiting list.) Think of Preston Trail Golf Club as Dallas’ most exclusive fraternity house. 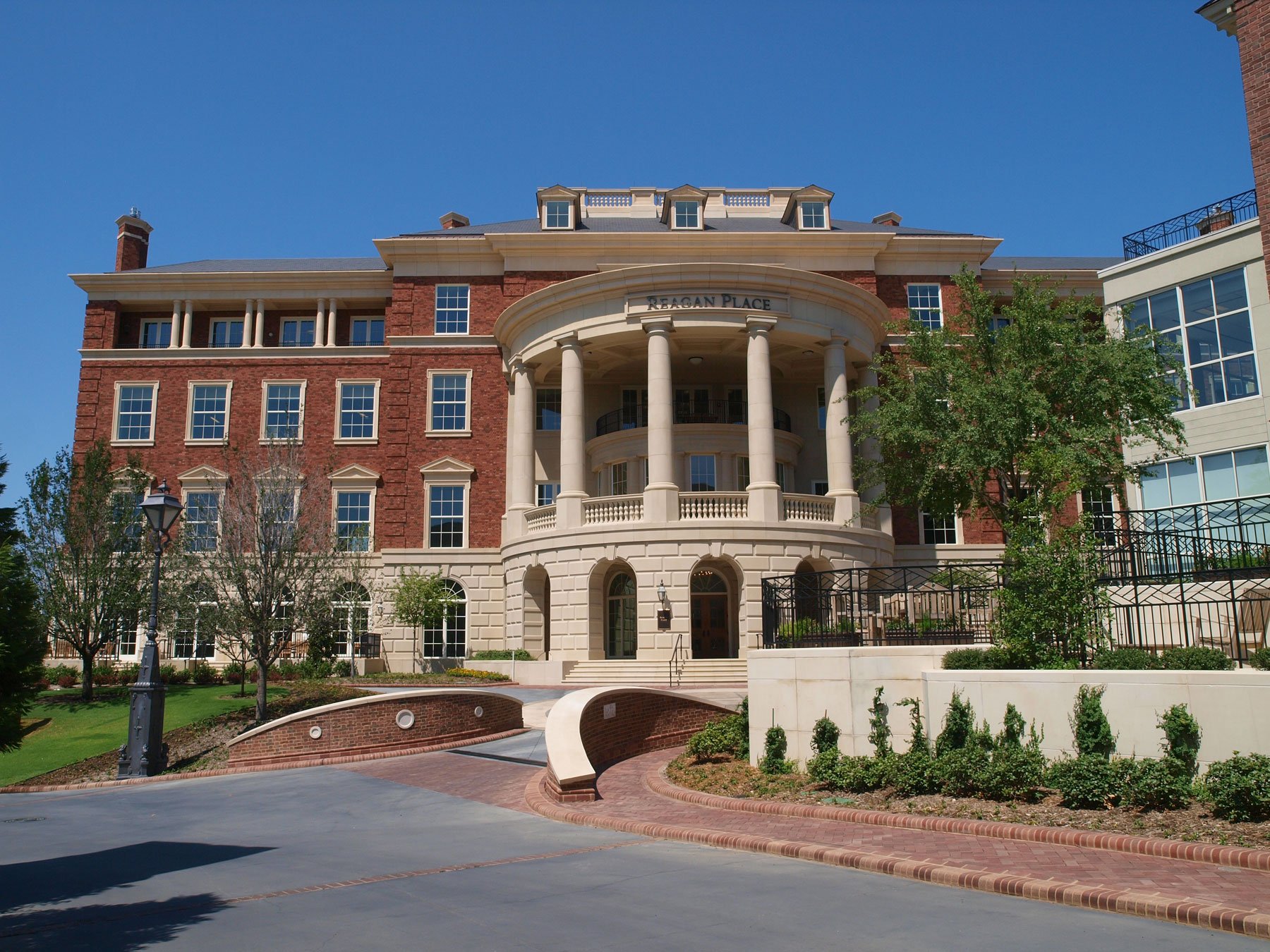 IN THE CLUB: With an elite roster of office tenants, Old Parkland aspires to a campus-like feel, its owner says.

The Power of Collegiality

Harlan Crow, the real estate developer and Republican mega-donor, is walking through a vast, desk-lined bullpen in one of Old Parkland’s great rooms, as long as a football field, where the Crow Holdings fortune is watched over and nourished. He points to a scale model of his vision for the site—an office park that aspires to something more. A new life has found the ruin of a former public hospital built more than a century ago. “The idea is to make it feel like a campus,” Crow says. “For most people, their college years are their glory years.” That’s why there’s a debate hall and a rotunda under construction in this oak-shaded office complex off of Maple Avenue, and a tavern with chessboard tables, where a select few executives gather and sip good whiskey by the light of college-seal-adorned stained glass. Crow envisions a community combining the intellectual curiosity of a university with the real-world power of a Dallas business titan. “We try to have people on the cutting edge of what they do,” he says of the campus’ fewer than 40 tenants. Gaining admittance to this clubby enclave has less to do with the ability to pay the sky-high rent—Crow “gulps” when he tells prospective tenants the freight will be $50 per square foot—and more to do with whether you intrigue the owner. In other words, Crow says, “more interesting than someone who sells life insurance.” Those in the club include pols like State Rep. Dan Branch, a former candidate for Texas Attorney General; financial titans like Harlan Korenvaes, one-time managing director at Merrill Lynch and founder of the multibillion-dollar investment management firm HBK; and ultra-connected pillars of Dallas society such as Kern Wildenthal, president of the Children’s Medical Center Foundation. Crow has a vision for these members of his club. He sees them arriving not in suits, carrying briefcases, but on bicycles, wearing shorts, carrying books, striding past the statues by French sculptor Antoine Bourdelle, past the campus mascot—Sailor the dog—into a very different stratum of Dallas power.