Even if you’ve never heard the name D.J. Pierce, you’ve likely seen his Glamazon alter-ego Shangela LaQuifa Wadley onscreen as a recurring competitor on RuPaul’s Drag Race. Now, the Paris, Texas native is the breakout star of A Star Is Born, Bradley Cooper’s much-lauded directorial debut, which is currently generating heaps of Oscar buzz for Cooper and co-star Lady Gaga.

Pierce first met Lady Gaga in 2013, when he appeared in the video for her song “Applause.” Even though he knew that Cooper was looking to cast a drag queen for an upcoming film, he decided not to audition — until he got the call from Gaga’s team.

“When Lady Gaga calls, honey, you answer the phone. She never forgot me and wanted me to audition for this film. Originally, that role was for a Marilyn Monroe impersonator, and no matter how long I stay out of the sun, I’m never gonna look spot-on like Marilyn Monroe,” Pierce says. “I found the nearest blonde wig, white dress, and beauty mole, and sang ‘I Want To Be Loved By You’ live for the audition.”

He didn’t get that job, but Cooper and the casting team liked his audition so much that they offered him a different role, this time with spoken lines. Pierce stars in the film as Shangela, the owner of a drag bar in New York City where Gaga’s character Ally performs a stunning rendition of French standard “La Vie En Rose.” 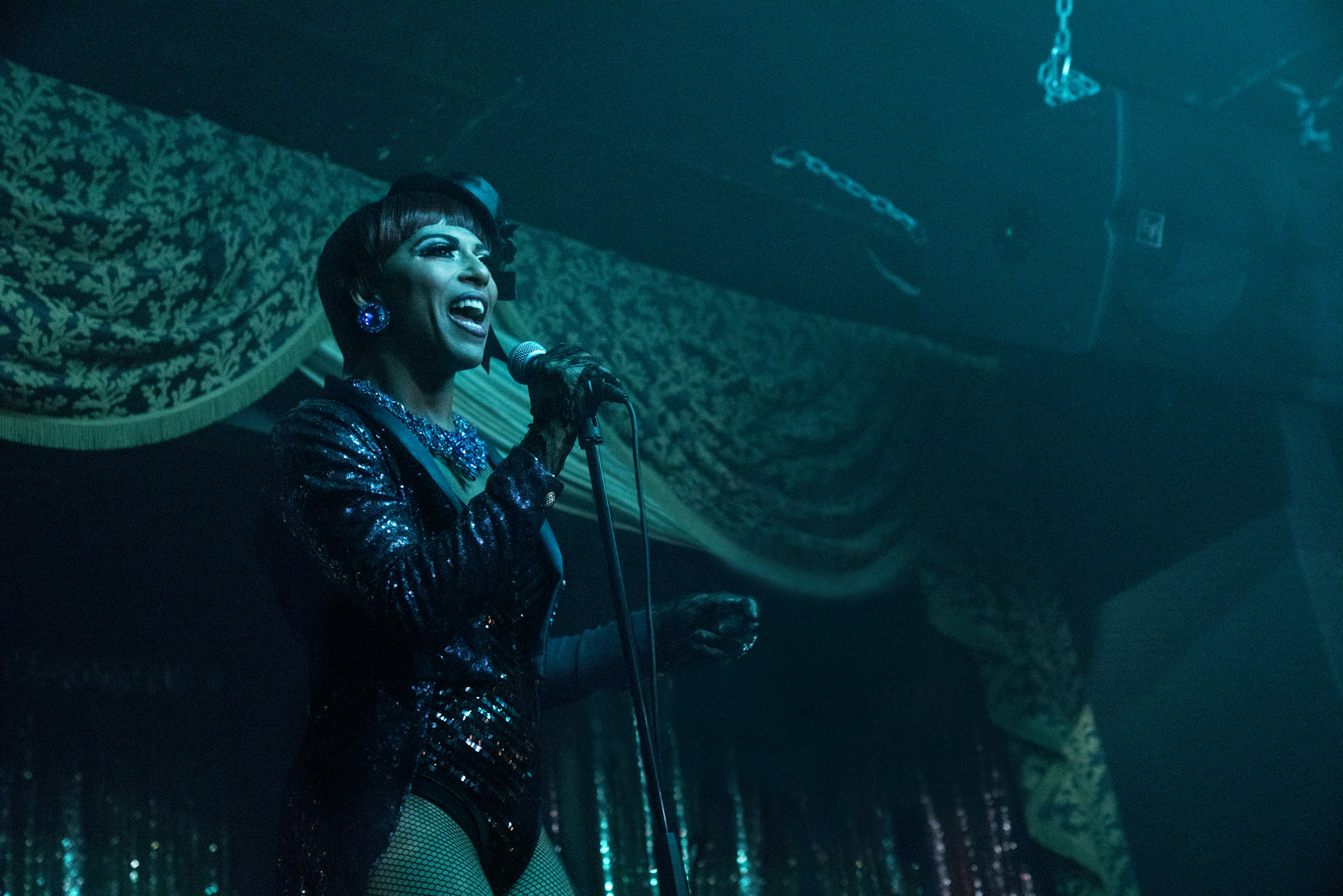 Still from A Star is Born, courtesy of Clay Enos.

While they share a name, the scripted character isn’t exactly reflective of the glamorous drag alter-ego Pierce has spent years crafting.

Working with costume designer Erin Benach, Pierce helped develop a “Cabaret-style” look for his character. “This is a character I wanted to take on, not my drag persona,” he says. “You see the high-waisted ringleader jacket, and it’s very Liza, very Cabaret. That was the feel for this New York drag bar owner.”

Years of experience in the intensely creative and competitive world of drag provided a unique advantage for Pierce as he worked alongside Cooper.

“Bradley was very passionate about his work, and he knew what he wanted from the actors. He was intense, and when I say that, I really mean passionate,” he says. “[Cooper] encouraged me to bring more authenticity to the role and just take it there. He’d say ‘Shangela, I want you to take it there, and if I need to pull you back, I will.’ Watching it back even, it feels like you’re actually in a drag bar. For anyone who’s ever experienced a drag bar or dressing room, that’s exactly what goes down.”

Immediately after the release of A Star Is Born, Shangela’s quippy dialogue – and the fact that she was hand-picked by Lady Gaga to audition for the film – have earned Pierce broader popularity. He’s long been a fixture of the national drag scene thanks to his appearances on RuPaul’s Drag Race, and a controversial turn on the most recent season of RuPaul’s Drag Race All-Stars, which pits the show’s most beloved competitors against each other in a battle for drag supremacy. In that war, Pierce’s competitor Trixie Mattel took home the crown that was so obviously intended for Shangela that it inspired a massive online backlash.

But, all of that drag superstardom began in Dallas. Pierce first met his “drag mother” and Dallas drag icon Alyssa Edwards years back while the two were drinking at The Village Station on Cedar Springs, now known as Station 4. After connecting with Alyssa Edwards, also known as Beyond Belief Dance Studio owner Justin Johnson, Pierce began his drag journey on the stage as a backup dancer for Edwards and other Dallas queens.

“Alyssa was the first person to put me in drag one year for the Halloween parade in Dallas,” Pierce says. “I used to go out her dance studio in Mesquite and spend late nights rehearsing with her, and since then we’ve been able to tour the world together and have all these amazing moments. When I first started Say What Entertainment, my management company for touring drag queens, she was our first client and is still a client to this day. She’s a hard worker, just like me.”

After a few years of dancing and working at TGI Friday’s in Dallas, Pierce eventually moved to Los Angeles, but has maintained his ties to North Texas thanks to Edwards, family that still lives in Paris, and Dallas’ thriving drag scene.

“Audiences in Dallas are so welcoming. They want to be entertained, and that makes me so excited to do my best job,” Pierce says. “Texas in general is a great home for drag. The audiences here really do show up, show out, and have a great time. Dallas has that big city feel, but there’s such a small town element to it, too. You can build these great relationships and make great connections here because everyone in the scene is so close together.”

Now that Shangela is a bonafide drag icon, Pierce is looking to expand his reach beyond performing in nightclubs and guest-starring roles on shows like Glee, Dance Moms, and Edwards’ new Netflix series Dancing Queen, which follows Edwards’ Mesquite dance studio and family drama.

“I have spent the last six years pretty much out on the road pursuing this drag dream, and I’m thankful for the work,” he says. “But in 2019, I look forward to returning to Los Angeles. I’m going to put a stronger focus on working as an actor and comedian there. That’s where my heart is. There are amazing directors and writers I want to work with, and I hope A Star Is Born can help open those doors.”

Where will we see Shangela — or D.J. Pierce — next? It’s impossible to tell. “I’m Shangela, you never know where I’ll pop up,” he says. “And no box is ever safe.”

In the meantime, he’ll be on the road completing his massive 2018 tour, hitting 181 cities across the globe by the end of the year.