Reader of this here blog has decided to pick up the cause of freeway removal in Dallas, starting a facebook page Save Downtown Dallas: Tear Out Central Expressway. Go like it, if you like of course. I did.

Along those lines, I’ll repost the ScienceDaily article about Brown Economist Nathaniel Baum-Snow’s study that intra-city freeways, when introduced into cities, correlate with an 18% reduction in population. Of course, ScienceDaily has to miss the point and put up a map of Eisenhower’s interstate system. Until we can differentiate between inter-city (good) and intra-city (bad), the colossal mistake many of these were will continue to go unnoticed as cities, like Dallas, bear the burden of intra-regional transportation infrastructure at (for the most part) their own expense in the way of disappearing tax base which moves beyond their jurisdictional boundaries.
Houston doesn’t have this problem since they annex everything around them. On the other hand, if we were to only flip the mindset a bit, we can see this as an advantage. Those people beyond Dallas aren’t voting in Dallas elections. Why are making transportation decisions on behalf of people who don’t live in Dallas?
Because of Dallas’s “landlocked” nature, we actually could use far more competition between DFW cities. I know, I know, NCTCOG is hailed all the time as a model of regional governance. For the most part, because they do two things, 1) elicit cooperation amongst all the cities within the interconnected beyond-boundaries economy that this is, and 2) get federal money. They are quite excellent at 2. Unfortunately, that can mean freeways/road expansion projects.
To quote Namond Bryce/Senator Clay Davis, “I’ll take any muh-effers money if they givin’ it away.” That’s Dallas. A corrupt politician and the 8th grade equivalent of one. Of course, I’m making a parallel to a fictional television series, but is it so fictional?
Any effort to get more freeways/expand road capacity undermines all efforts at expanding scope/efficacy of other forms of transportation. Rail, bikes, new kicks for pedestrians become little more than niceties used primarily by the indigent as everybody else thinks life is just fine…as gas climbs to $5/gallon. What then?
Isn’t it in Dallas’s best interest to look after its citizenry? To make the city more livable by getting rid of the very things that chased everybody out? Everybody will say, “OMG businesses will all die,” just like they did in Copenhagen when they started taking cars off of streets. Or as they warned Vancouver when they wouldn’t let freeways get built in the first place. Or when Portland or San Francisco began removing freeways from their inner-city. Do you think any of those places regrets those decisions? Do you think they said, “man, I sure hope Oakland and San Jose don’t mind.”
Then they’ll say, “OMG traffic will be a nightmare!” And it very well might for a few days, maybe a week. Then you know what happens? That traffic begins to find other ways around. If it was to go to work, they might take the train instead. If it was to go shopping at an outlet, perhaps they do it online. If it was to drive somewhere that had to be driven, perhaps they find another route or go somewhere closer.
An amazing thing happens when you cut road capacity. Traffic demand falls with it. It doesn’t just merely re-route. But some percentage disappears. This doesn’t mean the economy shuts down and we all lock ourselves in our emergency shelters eating yankee beans by candlelight waiting for Armageddon to subside. Here is an excerpt for Tom Vanderbilt’s Traffic:

If you do not believe that new roads bring new drivers (ed. note.: as the author explains in the previous section this is a concept known as “induced demand”), consider what happens when roads are taken away. Surely all the traffic must simply divert to other roads, no? In the short-term, perhaps, but over time the total level of traffic actually drops. In a study of what they called “disappearing traffic,” a team of British researchers looked at a broad list of projects in England and elsewhere where roads had been taken away either for construction or by design. Predictably, traffic flows dropped at the affected area. Most of the time, though, the increase in traffic on alternative routes was nowhere near the traffic “lost” on the affected roads.

As I wrote the other day, in happily pointing out that Joel Kotkin has zero clue what he’s talking about suggesting that the internet replaces walkability (which makes no logical sense whatsoever), the internet along with price corrections to driving as a way of life will be replaced by more affordable, more efficient, and FASTER forms of interconnectivity: 1) internet replaces many regional(and longer) connections, and 2) spatial relocation to walkability replaces others. Thus converting the abandoned city to a lively city: 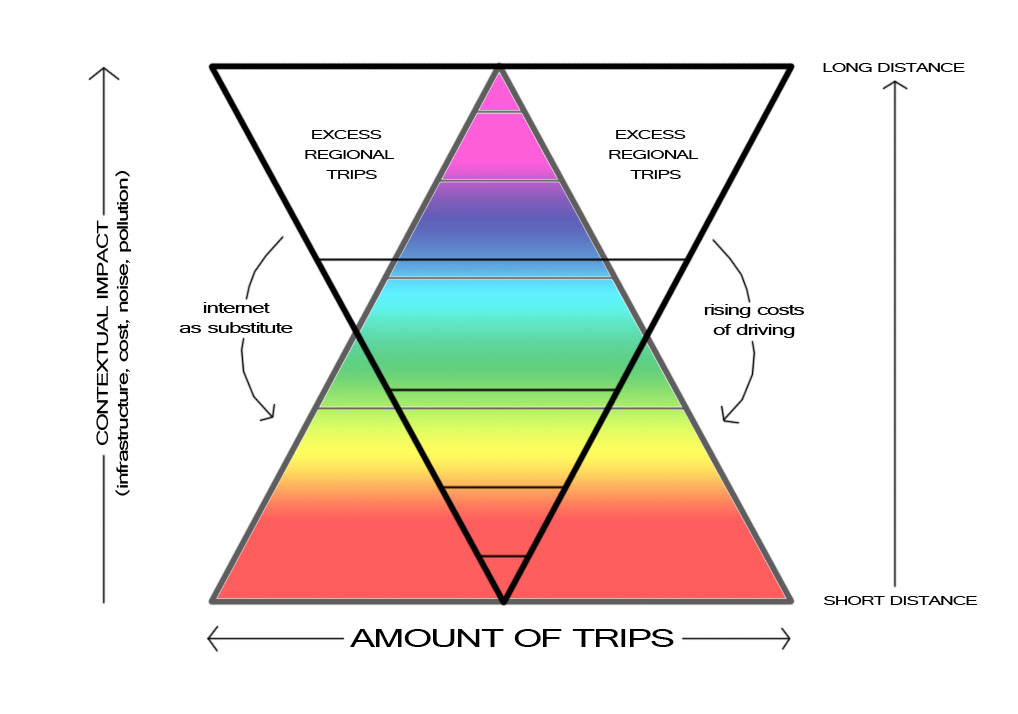 Here is what will happen if in fact we were to remove one of the many freeways carving up our city like an Easter ham. We would open up hundreds of acres of land for development, which means increased affordability as well as increased livability (ie more walkable urbanism). We would have an increased tax base and the ability to provide more services, particularly at a neighborhood level. Businesses wouldn’t shy away from Dallas, but instead say, “hey, they’ve got something going on there,” and look to relocate here without having to fork over tax breaks to get them.
Quality of life is going to be the driver of the 21st century economy. Job growth will come from the businesses looking to locate in areas precisely because of the area, the quality of life, and to be near all of the other similarly-minded people doing similar constructive things.
And as far as the suburbs go. This would be the best thing possible for them as well, like 30-year old children still living at home. At some point ya gotta cut the cord. They wouldn’t be so dependent upon the core city. They would have to become more resilient, more walkable, more diverse, more independent themselves.
DART needs the ridership. The state needs to spend less on infrastructure (and certainly wouldn’t mind unloading its biggest asset (Right-of-way) in order to balance its own budgetary crisis). Cities need tax base. And citizens could probably handle far less Vehicle Miles Traveled and the associated gas/ownership/maintenance costs that go along with them.
Lucky for us, we have the perfect storm of opportunity and economics swirling around us to make it happen. If we were only willing to piss off our neighbors a bit. I’m sure they’ll forgive us.