In the heat of the discussion of whether 175 should go transition from a dangerous highway that severed local connections to a 6-lane boulevard or a 4-lane boulevard, I decided to propose a compromise where the 5th and 6th lanes would be shared bike/car browsing lanes and at lower speeds than the 4-primary travel lanes, thus creating a calmer interface between LINK and PLACE: 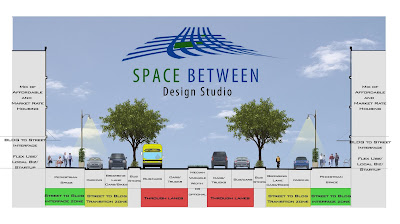 One of the key issues in planning these days is making sure buildings interface with the sidewalks, with permeable buildings made possible often through ground floor uses that are open to the street that are typically retail or small office, have plenty of clear glass to accentuate the visual permeability, and multiple entries along the building wall.

What we have still been very bad about is ensuring that street designs do the same, that they also interface with private development sites. Our arterials are the perfect spot for this kind of redesign, 1) because they are already very wide and 2) density of development WANTS to align with density of movement. However, this doesn’t happen because our arterials are not designed in a way to promote density, to interact with the kind of mixed-use development that makes for great cities (and generates the most tax base).

European cities have been much better about doing this than we have. The above section is modeled after a typical European boulevard. You’ll see the traffic with the highest rate of speed is towards the center and away from more vulnerable forms of movement such as bikes and pedestrians. The highest speed lane is the middle most, where the lane next to it incorporates a bus lane to be shared with traffic. Because the buses frequently stop, it is closer to the transition zone, which is then shown in yellow. The yellow zone is for medium speed to slow speed traffic (15- to 25-mph) and includes parallel parking as well as a shared travel lane between cars and bikes. Lastly, is the green zone, which is the pedestrian realm, for the slowest, most vulnerable of movement, but also where there is the most interaction between street space and access to private uses.

The one glaring Con with this scheme is the width of the Right-of-way. It doesn’t recapture a great deal of land that can then be used to leverage private investment whereas the 4-lane scheme does. However, this scheme DOES create a better interface between traffic flow and potential development along it than would the 4-lane scheme.

[edit 2] Just checked out the highway section and it looks like the ROW is about 210′ give or take. The street section above is 130′ give or take which would leave 40′ in depth on both sides to roll into potential private development.

Other little details: the new street could probably use a new name (edit: nevermind – just noticed that the Cesar Chavez renaming extends all the way to the curve) and the graphic doesn’t include lighting in the center median. I think there is also a good opportunity to make this central street lighting a sculptural, iconic element for a great street that makes an emphatic statement for the City and South Dallas.

[edit 3] If you’ve been reading this blog for any period of time, you know that I like to draw analogies from various biological sciences to explain various elements of the urban puzzle and occasionally apply the principles to urban design. In many ways, the new section dictated by speed and comprehensively looking at all forms of traffic including bikes, pedestrians, buses, driving to park, and parking, operates in many ways like a stream section where the fastest flow is to the center:

The fastest flow in this stream section is in the area labeled 4. The slowest is in five, but depth doesn’t really apply, unless you want to show a street section with a subway running below it, I suppose. As many fishermen can probably tell you, the areas just below the surface towards the bank, are the areas with highest degree of biodiversity. This is where life happens, where water eddies, gathers, spins, and dances along the banks and there is some interaction between bank soil and water, people and buildings.