New Orleans and St. Louis are ready to start getting serious about intra-city freeway removal. Why? Because hitting rock bottom and exhausting all other hopeful yet feeble and misguided attempts towards revitalization have failed and shocker! it turns out that winding back the very siphons of vitality:

First, New Orleans and the I-70 expressway:

A small fraction of drivers — less than 20 percent — use the Claiborne Expressway as a through route between the east and west portions of the region and beyond. With most through traffic using I-610, the Claiborne I-10’s “use does not match the intended function of an interstate highway,” concludes the report.

Point being that it is mostly used as a local route and a freeway is hardly the best design for local connections. As I’ve said, freeways are 1) a LULU or locally undesirable land use and should remain outside of the neighborhood fabric, and 2) are only economically beneficial in linking metropolitan economies, ie Houston Metro to the DFW Metroplex, but are disadvantageous within the actual cities themselves, as St. Louis blogger points out here:

Two adjacent high-density neighborhoods will be richer than either could be alone because businesses at the edge of each neighborhood will be enriched by pedestrian traffic from the other. Driving a freeway through the middle of a healthy urban neighborhood not only destroys thousands of homes, it rips apart tightly integrated neighborhoods. Pedestrians rarely walk across freeways, so businesses near a new freeway are immediately deprived of half their customers. Similarly, residents near a new freeway lose access to half the businesses near them. The area along the freeway becomes what Jacobs calls a “border vaccuum” and goes into a kind of death spiral: because it contains little pedestrian traffic, businesses there don’t succeed. And because there are no interesting businesses there, even fewer people go there, which hurts the sales of businesses further from the freeway. The harms from such a freeway extends for blocks on either side.

We saw freeways in Germany during and after the war and thought, by golly those are a great idea! Military and highway spending did wonders for bringing Weimar Germany out of its deep, deep depression, we can do the same! And then went overboard and never stopped spending looking for what ultimately turned out to be increasingly damaging ways to insert freeways into the daily lives of all of us. It made a few people very wealthy and they are not eagerly awaiting this turning tide of popular perception.

Let’s go through this diagrammatically, shall we: 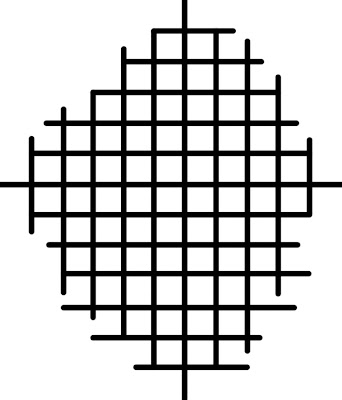 First, we have a typical American gridiron city laid out for real estate simplicity and flat midwestern geography. 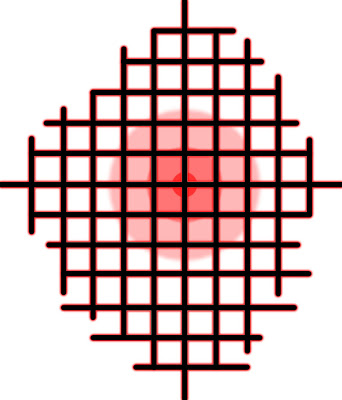 The center of gravity forms at the crossroads, the main and main intersection. Businesses and density can reliably locate along these main streets. The density, in a livable, fully functioning city is merely the byproduct of desirability and there is an accurate and direct relationship between the two. 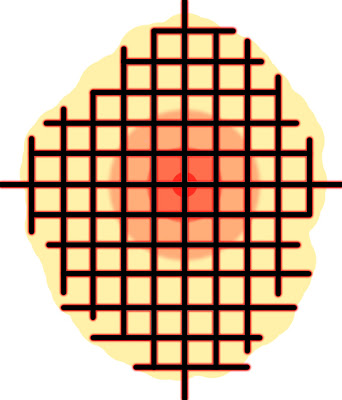 Since the entire network is interconnected, like an electricity grid, the entire system is “energized” or alive. 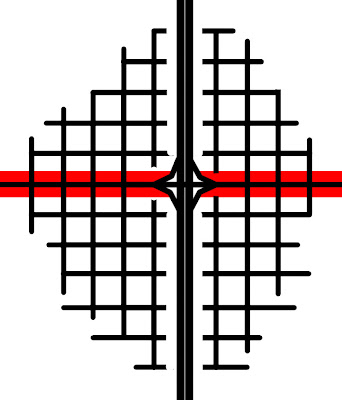 Now we cut a highway through it for the sake of “interconnection” or jobs or just spending money for the sake of circulating it. We’re not generating any real value because assuming this connection is necessary, it could still happen to the periphery of the city like any other LULU.

The red bar is essentially the “port” system for the amount of cars delivered along a dendritic, overly-hierarchical road system, aka parking. This becomes your typical strip retail area. Think of this like a natural stream and ecosystem that all of a sudden is exposed to a new runoff and drainage source. The shear volume erodes the stream banks and slowly but surely kills the ecosystem. 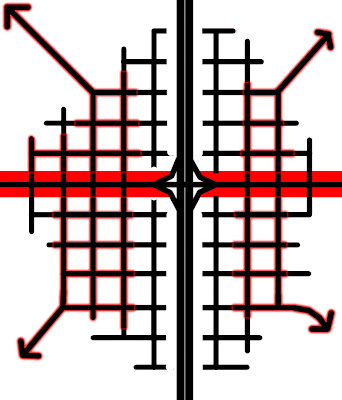 Where the full connected system once energized the entire network, now we only have pockets of connections. One part of town no longer plays a part in strengthening another. They are left to whither away. Durability of the entire network is diminished. 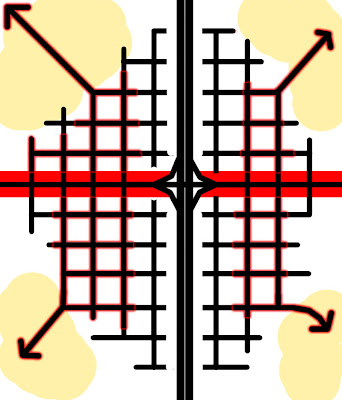 Because desirability is now diminished, people flee. Like in the streambank, life decides “hey, I can find a better, possible life somewhere else.” Residents moves outward to further isolated and disconnected pockets that have very little embedded predictable retention of value or durability. Similarly, businesses try to locate for predictable customer base, but that proves impossible as the target location is always moving further and further out as more roads are constructed, and new shopping centers pop up each decade, also further out.

The end result is “anti-city” or places that are worth less than the sum of parts. Our cities and individual properties need to be part of an interconnected larger system in order to be greater than that sum of parts.
———————————
Lastly, and relatedly:

Walkable, bikable neighborhoods reduce risk of death 19%. From the lead researcher himself:

Lead researcher, James Woodcock said, “This research confirms that is not just exercising hard that is good for you but even moderate everyday activities, like walking and cycling, can have major health benefits. Just walking to the shops or walking the children to school can lengthen your life — as well as bringing other benefits for well-being and the environment.”

But dude, I can’t cross that highway without playing a very real game of frogger with my life. And kids live so far from their schools they now must be bussed from all over creation. More negative external outgrowths of anti-city inertia. Now about those school budgets…