Any time a term rises from specialized fields to main stream dialogue, there tends to be a period of transition where the word lacks definition once it escapes the quarantine of academic or professional circles.

For example, sustainability now means everything from the high-tech (light-emitting diodes) to the decidedly low-tech (backyard vegetable gardens). Everybody and their brother describes themselves as an urban designer in the architecture and design world, which apparently the only qualification is counting parking spaces on a strip center or aligning a cloverleaf interchange. Truly urban indeed.

It only gets worse when that term readily escapes definition by its very reason for being. In this case livability. In the DMN’s article about yours truly, a UT architecture professor mentions the term, but it gets little context. Every time there is a new ranking of world cities based on Livability, puzzlement ensues. Next American City wonders who gets to define it.

The problem is two-fold. First, our inherent need of language to have a set definition and to be so defined by an established authority. The second, and related to said “established authority,” is the architecture profession’s foolish Ayn Rand inspired need to be said authority, which ultimately and typically mucks up cities more than it does improve them.

Livability escapes definition because it means different things to different people, as it should. It is not top-down or bestowed, but bottom-up and created. Any good urban designer, city builder, developer, or city official’s job is about providing the platform for that to occur: choice.

Represent your market as Howard Bloom states in his treatise and defense of Capitalism:

Visit neighborhoods and towns you’ve never seen. Do what saints and saviors do. Go among your people. People you’ve never imagined meeting. Get to know them. Stand up for them at meetings. Fight for them when plans are laid. Bring humanity new ways of being, new ways of seeing, and whole new forms of life and play.

While that passage looks remarkably like it is about cities, the book only touches upon cities in a very general or anecdotal manner. In it, Bloom provides the historical and biological imperative of capitalism. So discussing economies why does it read like he’s rabble rousing for the next public meeting regarding a new urban plan?

I would, and often do, argue that cities are the physical embodiment of economies. And economies are created and driven by human need. Therefore, human need written deep in our genetic code are the source for why cities are the way they are. Need creates Economy. Economy is City. Need is City. 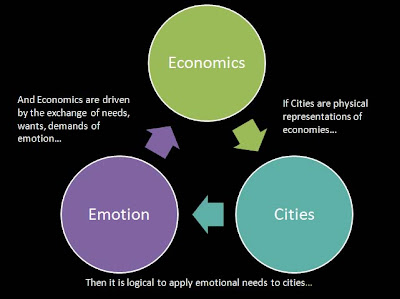 And these perpetually shift in the spiral of human progress and folly.

Human need is why the internet hasn’t spelled the end of real, social interaction as many doomsayers feared we might be locked in a room interacting solely via chatroom. We need human interaction. So we molded the internet into a social tool, web 2.0. Now the web is used to enhance cities, because we need them.

It is why it took a pollster and statistician, Nate Silver of Five-Thirty-Eight.com to understand the variable nature of livability as he helped New York Magazine create a web-based application where people could adjust sliders based on how important certain factors are to them, such as good schools, housing affordability, nearby restaurants, nightlife, and mobility aka access to multiple modes of safe, efficient, distance-appropriate transportation.

While we can safely assume there are certain factors we, as humans, universally require in determining a livable place (typically the bottom rows Maslow’s pyramid, such as safety, hence being the widest for the most amount of people with such needs), the variability of such factors are based on our own prioritization process. 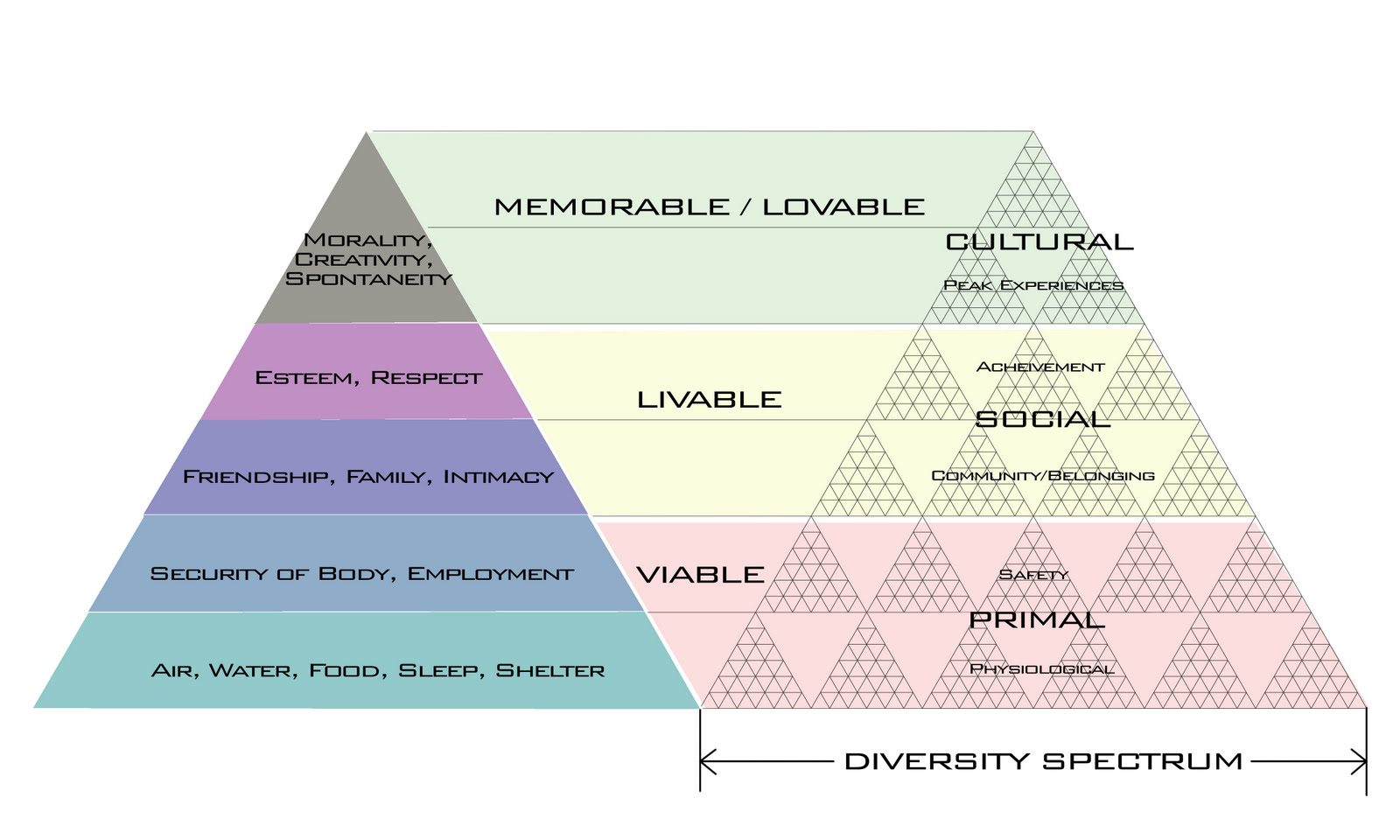 Unfortunately, we’re incredibly bad when we’re asked what we’re looking for and surveys are often skewed by respondents answers influenced by their own expectation of what they expect the surveyor wants to hear. A far better indicator is the value we place on certain areas or parts of town. It means there can’t be such pent up demand for walkable urbanism.

Of course, that requires real choice in the market place beyond which cul-de-sac you decide to lay your head within a stick-and-paper McMansion built to last less than twenty years. It also means mobility aside from the expert skill in deciphering which land is moving the most quickly during rush hour. And it is why the transect is important.

If you are wondering why Zurich, Copenhagen, and Munich rank so highly on livability, but aren’t considered Global Cities, it is because they provide the greatest availability of education and opportunity to the widest range of its citizens. It is because they are safe and have a variety of housing types. They take care of the most basic of human needs with access to clean air, clear water, and healthcare. These are the lowest levels of Maslow’s pyramid. They are the platform of livability.

We’re busy caking on monuments to supposed culture without the availability of the most basic human needs. If a city is Maslow’s Pyramid, no structure can stand without a foundation.

When I think about livable cities, I think back on some of my favorite childhood readings, choose-your-own-adventure books. In Livable Cities, you can choose your own adventure where each has the ability to live the way they want and has the faculties available to them to pursue such a life without diminishing the pursuits of others. In some cases, such as transportation, it is about the provision of all modes safely, effectively, and ideally…attractively.

Perpetual subsidies to the auto industry, the highway construction lobby, and towards unnaturally cheap gasoline is one very expensive obstruction.

Professor Almy lumped walkability in with livability and rightly so as it is integral to Livable Places. Walkable places are not those that you must drive to, valet your car, and proceed to walk around (although here in Dallas we have a funny way of describing such places as walkable). Walkable places are those you can walk to, not walk within. Malls are failing throughout the country for this very reason. Walkability is a necessary ingredient as it refers to interconnected, complete neighborhoods where all can participate and do so without lighting their hard-earned money on fire in an internal combustion engine.

With an economy heading towards one that is more individually customizable, cities are only bound to follow to a place that is more self-defined.