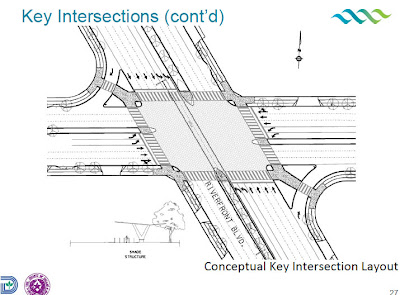 Every invisible hand is attached to the invisible arm of government. ~paraphrased from a quote by Ted Goranson in an interview by Alex Marshall in the book How Cities Work.

Over the weekend, the Unfair Park blog by the Dallas Observer has a link to a City Council presentation updating plans to make Industrial Boulevard Complete, by apparently not “completing” it at all. Here is blog buddy Jason Roberts of Bike Friendly Oak Cliff’s response:

It’s a 6 lanes + 2 turn lanes street with glorified sidewalks being developed as “cycle tracks” for shared bicycle and pedestrian use. In other words, its form is:

There are multiple reasons to develop a complete street including lessening CO2 emissions, allowing for/enabling multiple transit options, enlivening an area with pedestrians, and greater economic development potential. Problems with our current streetscapes are that there is far too much weight given to one mode of transit which lessens the likelihood of use for any other. What are we trying to enable? Pedestrianization of an area, or automotive through-way? When it’s far easier to drive than it is to walk or bicycle, why attempt another mode? And who exactly would want to walk, or dine, or bicycle beside a 6 lane arterial?

The following is how I respond:

I concur with Jason’s assessment. Streets such as these are 1) sorry attempts at compromise to appease the rabble, and 2) barriers to local economic activity despite its purpose as “connector.” They are centrifugal rather than centripetal, meaning the public realm has to be safe, attractive, and amenable to cross-shopping, pedestrians crossing streets, buildings “communicating” with the buildings across the street, etc. in order to draw people to focal points of activity.

Given how fragmented the area is by the River swath, the highways, the rail lines, AND Industrial Blvd, maintaining a certain capacity of traffic ignores the relationship between transportation and development and the public right-of-way’s dual role as link and place. It will hinder any and all attempts to “upgrade” the developments in and around this area.

If we want to qualitatively improve the development in this area, somebody has to have the gumption to say that vehicular capacity is one of the hindrances and it should be reduced in order to make private investment even viable.

If the street network isn’t made more livable, then in order to attract any investment it has to be subsidized. Rather than subsidize development, subsidize livability and watch the private investment flock to it.

The area needs space. It is incredibly constrained. Why not make Industrial the attraction, by reducing traffic flow lanes, recapturing the Right-of-way and rolling that extra land into development sites. That way you incentivize development by improving the livability, safety, and possibility of Industrial rather than spending on pig lipstick and then doubling down on the subsidy that it would take to invite private developers to the area.

To paraphrase a quote that I once heard a friend use, “that kind of compromise is like a car-boat. It’s not a good car and it’s not a good boat.”

And because I’m OCD about finishing thoughts, I add-on:

Reticence to the “complete street” movement is understandable. It comes from the conventional wisdom established over 80 to 90 years of urban and transportation planning. Unfortunately, that conventional wisdom AND the planning behind it were all incorrect and have been failures.

Economic activity requires concentration. This is why the most expensive time slots for advertising are when the most people are watching. The most expensive real estate is where the most people are. The shopping mall was a natural reaction to big roads undermining the convergence or concentration of people. But, the shopping mall is largely being undone by the same issue, its disconnection from the rest of the urban fabric.

Roads are important delivery systems for concentration. However, if the road isn’t “tamed” to be more pedestrian friendly, then it undermines concentration. It becomes an agent of dispersal rather than concentration. Residential then disperses because the preponderance of unsafe, undesirable, inhumane roads. Then retail has no choice but to follow the pattern of dispersal, reducing cross-shopping, concentration, and vitality.

Also, if the road isn’t “tamed” then any “urban” development nearby have to effectively turn their back on the road. The cutting edge in urban planning is showing that this too is not effectively allowing properties to reach their highest and best use or value. Studies reveal that for every deviation from a main stem or axis (the turning off of an arterial) shows a correlated reduction in real estate value.
(Some even suggest that every slight turn of a street may as well, but this can also be compensated by improved place and character of winding streets.)

This is why before assembly line, industrialization, and theoretical planning, et al began undermining thousands of years of adapted city evolution, that real estate value and density clustered along the “High” Street or “Main” Street.

On the other hand, the current design of our streets also reduces adjacent value. Developers, whether for residential, retail, or mixed-use want to be near the concentration that arterials provide, but also want to be nowhere near them.

20th century transportation policies have put the “economy of place” at odds with the “movement economy” undermining economic activity, efficiency, and value.