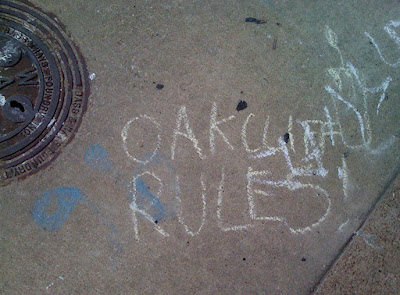 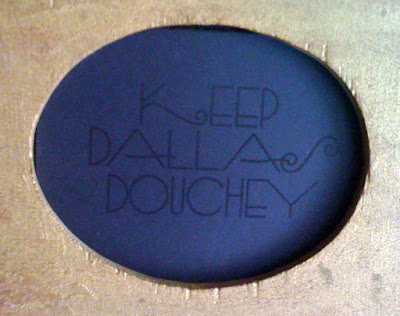 I’ve been planning a post on graffiti as a livability indicator for a long time, but haven’t quite found the exact narrative for which to frame the argument. The general gist would be that like its urban sisters density and gentrification, it comes in various forms: good, bad, destructive, harmless, or helpful. Because their meanings are so broad and contextually driven, these words often end up being code words masking other intent.

As with the above, sometimes it can be art. Sometimes it can be crude but so illuminating when shown in contrast. The contrast highlighted here is one of mere local sentiment but deeper represents the disconnect between goals and the policies that are failing to see the vision realized, preventing real neighborhood vitality from taking place.

Yesterday, at the invite of Jason Roberts of multiple fames: Bike Friendly Oak Cliff, Build a Better Block Project, and band Happy Bullets, I was able to head down to X+ in Oak Cliff and check out their “citizen’s arrest” of an untamed public street. In this case, it was the quasi-guerilla conversion of Tyler Street into a “complete street” that has been getting some publicity in local media circles.

What is a complete street you ask? It is a street that dedicates equal priority to various forms of transportation (or the opposite of) within the right-of-way (or building face to building face). This might include just vehicular travel, parking, sidewalk, and outdoor seating. In busier locations, it could also include various forms of transit such as dedicated bus or other mass transit lines. The purpose is to regain the necessary safety for pedestrian life to occur by limiting the domination of spaces by car travel and the infrastructural design supporting dangerous speeds through places.

In action, the conversion of just one block of Tyler Street had a profound effect on safety (at least perceived), enjoyment, livability, AND commerce for the local businesses. Jason relayed to me that the local bookstore, Cliff Notes, had their best sales day ever on Saturday, the first day of the staged “complete street.”

In conceptual terms, what Roberts and others did was to apply greater differentiation to the street hierarchy. In the traffic planning world, hierarchy is fairly simple. Each street generally gets one classification (arterial, connector, local, etc.) and that is that. The street is generally designed to be the exact same no matter the location or context. What this has done is effectively flip the natural order of things: where the most traffic is, the most density wants to be, and the most activity happens. Our street design was so car-oriented that the streets cutting through neighborhood centers such as this one became repellents rather than attractors; barriers to activity and economic development.

What occurred over the weekend at Tyler Street was the intuitive application of a second (and necessary) metric to street design hierarchy, that of Place. Using a two-dimensional tool for street design is a growing concept in both Australia and in Great Britain, places similarly afflicted by poor street design and transportation planning, but not to the extend here.

(graphic pulled from this presentation by Prof. Peter Jones)

I find it far more effective in appropriating design based on the dual purpose of streets which is the backbone of the report by the same name: Link and Place which details that public rights-of-way can be one or the other, or even both. If both is the goal then certain design elements are critical to allowing link and place to occur simultaneously considering efforts at “saving time” can often be in conflict with the desire to “spend time.”

Because the transformation of Tyler Street occurred only on one block the contrast between street as Link and street as Place was striking. See for example this picture looking south along Tyler where the Street remained untouched: 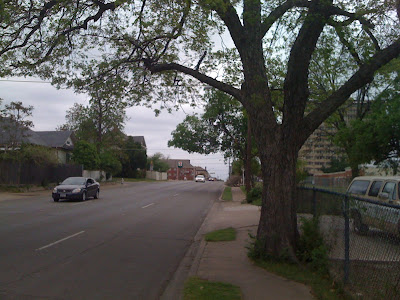 Wide. Narrow, inconsistent sidewalks. No parking except off-street. It isn’t a stretch of the imagination for you to take my word for it that these cars were driving in excess of 45 mph despite their static pose for this shot. We know that speed regulation and enforcement is an utter failure of policy and expenditure of resources. Cars and their operators will only drive as safe as the conditions and design of the street allow them to feel comfortable to do so.

So what happened when these cars hit something out of the ordinary? 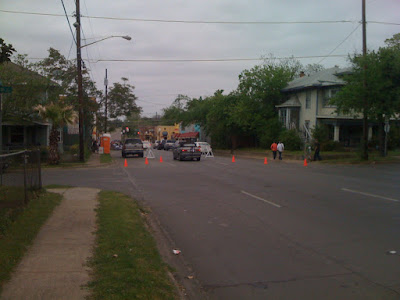 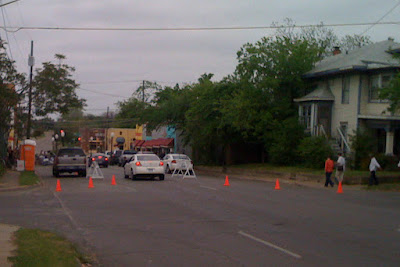 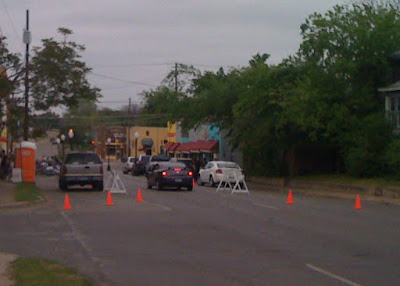 Let’s look closer at the third car… yep, those are break lights. In fact, the cars would drive so slowly through the “Better Block” that people felt comfortable enough to “jaywalk” and even blindly cross the street without even looking for oncoming traffic. That’s a safe street. The environment ensured it. This delay of possibly an extra 15 seconds of each driver’s life was reacted to not with rage but more often of admiration and amazement. One overheard comment, “I wish my street was like this.” 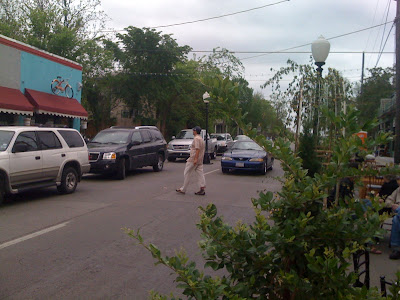 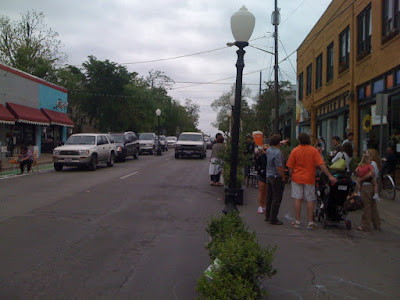 People of all ages showed up to socialize, people watch, and “spend time,” representative of “slow” living that allows us to take time and enjoy life and the company of others, differentiating us as humans from the assembly line logic of traffic planning. 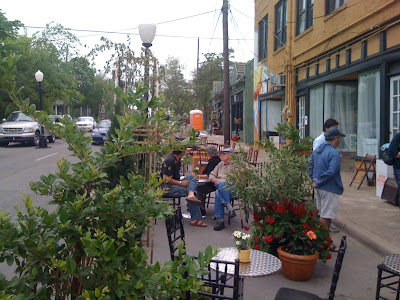 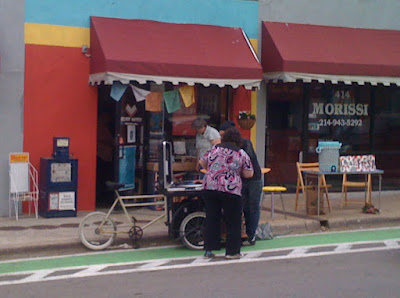 Above: yes, that is a set of turntables on a mounted rig on a bike. Below, adding to the ambience of urbanism, the sensory experience whether it was tastes from the Brownies in a Jar from around the corner, or the sounds of bongos played on the sidewalk, or the smells emanating from the coffee shop, the complete street fostered a participatory environment where businesses, residents, and visitors all took part, whether as performer or passive observer. All enjoyed experiencing the life so missing from so many parts of the City. All prevented by written policy. This was Jason Roberts’ point. 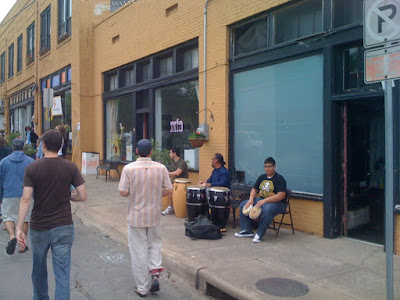 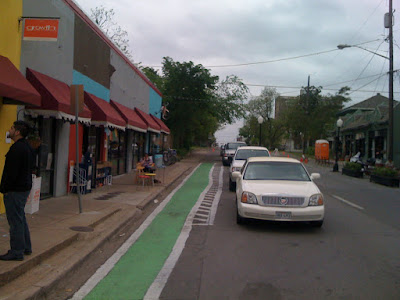 Above: the painted bike lane with on-street parking at such a distance to avoid conflict between door openings and bike traffic. 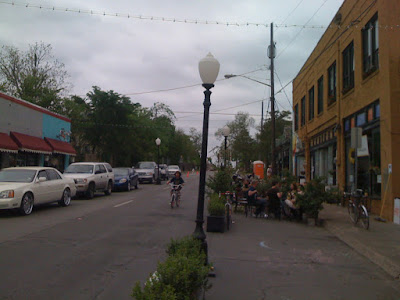 One interesting lesson was that the street had been so effectively narrowed that the bike lane in effect was merely a rhetorical prop, much like the traffic lights. The kid in the above photo felt fully comfortable riding in circles on the street, as did his parents nearby. However, it should be pointed out that the bike lane would increase in efficacy as it lengthens and extends further along the street defining the place for bike traffic as a street morphs in various forms or design sections based on its place within the Link/Place matrix. 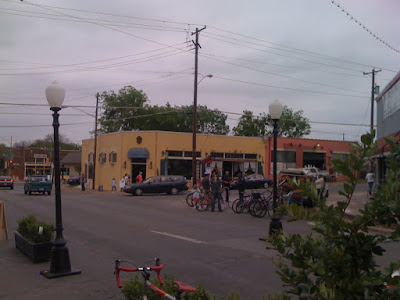 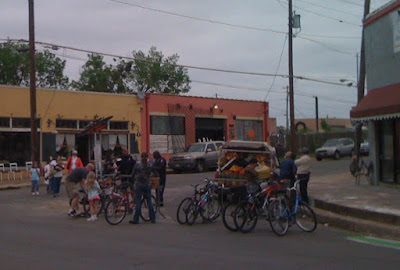 It has yet to be listed or defined as a livability indicator, but the presence of bicycles clearly is one that relates to Babies! or AYFs. It is one that is predicated upon safety. At Tyler Street yesterday (and presumably the day before) there were strollers and bicycles a plenty.

Once safety, lowest on the Maslow Hierarchy of Needs, is achieved (when cars, the most deadly of transportation modes, no longer have priority of space) only then can culture be meaningfully introduced. With the right urbanity, the right platform, it occurs naturally through citizen created vitality. Art and Music were both present in a place we could call a real arts district, where more people (and culture) were on each day of the weekend than the named Arts District (which illuminates the challenge of the Dallas Arts District).

This can’t just happen anywhere however. As I pointed out to Jason yesterday, these will be most successful in the areas where it is most inconvenient, areas with the most convergence, which naturally form the centers of neighborhoods.

[The sound you just heard was not another stadium implosion, but the brains of ten traffic engineers exploding as their world, their belief system is no longer valid. Their bibles for how to move cars are instantly irrelevant.]

Neighborhoods throughout the city deserve similar experiences, places to go that are within walking distance and spend an afternoon cheap on the wallet but valuable to the soul, with family and old friends, or new ones (hopefully just friends, but for the single folk, perhaps make new families too. Walkable DFW does not sanction polygamy.). However, the transportation system deters this from happening. In our attempt to allow for the most amount of traffic through our neighborhood centers, we eliminated the ability to have the most amount of traffic (foot traffic), and in turn, do the most business.

Will these compete with malls or power centers in terms of sales receipts? No, but neighborhood scaled activity hubs are central to our every day lives. This is real economic development that doesn’t take the nonsensical public spending on highways, but rather by eliminating the barriers to real urbanism is what economic development should be all about. As I have said before, intra-city commerce can occur in any form, it is up to us to determine the right transportation network to build and foster the formats which we would prefer.

What the Tyler Complete Street represents:

The last part is the scariest. It gives the most credence to the growing notion that centralized planning is defunct. In some ways it is, but only in the way Frank Gehry and others understand the 20th century version of planning. To say all public/government led planning is failed and that this version is the only ideal version is also false. As I’ve said before, it is about eliminating the barriers to both economic and community development. In most cases, this means undoing the “planning” of the 20th century: the highway and arterial system.

See New York City where Transportation Commissioner Janette Sadik-Khan is transforming that City with some paint and jersey barriers, redefining the public realm to prioritize pedestrian activity rather than vehicular movement. It is the difference between buying a potted plant and actual gardening. It is about creating the platform, fostering and tending to places to encourage vibrancy rather than attempting to bestow it. And the public sector has the onus on removing the barriers by correcting its mistakes. It will be paid off in spades with a real “World Class City” rather than one that we so often incorrectly label as one.

In many ways, fostering urbanism is about letting go of control. Gardens and ecosystems don’t grow optimally with over pruning. A world class city is one that people love. People loved what was happening at X+ yesterday and in Bishop Arts with the Arts Crawl. I know I loved it.