I have talked about what the future of retail will look like several times before (here and here) and I’ll be hitting on the same issues discussed in those, within this post which is directed at a real place, still in its hatchling stages of development.

In particular in one of the previous posts, I discussed where retail in dallas will re-congregate, with particular emphasis on the CityPlace/West Village area. Not because of anything particular that has yet been designed there, but rather the convergence that is established by infrastructure and coding (it’s urban genotype) will ensure its success.

The fundamental point is something that I’ve been evolving and packaging for consumption since then: 21st century retail’s need for 3 kinds of convergence:

2-Dimensional convergence is what you see in a planometric drawing of a city, perfected during the Baroque and used effectively since. I often use the L’Enfant DC plan, Broadway’s axial cut applying a hierarchy through New York’s regular grid and Rome’s various papal axes, in this case the trivium arriving at Piazza del Popolo (work of Ed Bacon also is very effective at teaching this) to illustrate this point: 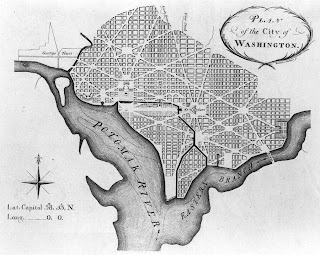 What often happens however, is that these inherently create people spaces (moreso than retail spaces) as the convergence of multiple conduits requires an outlet, more space for the arriving people from various directions. For example, if you were to pour two or more full glasses of water into another vessel, you would need a larger container. Retail requires proximity of other stores meaning narrower distances for cross shopping, so the retail spills down Via Del Corso from Popolo, or Connecticut from DuPont Circle, or down any of the streets off Times Square.

3-Dimensional Convergence refers essentially to mixed-use buildings. If there are residents above and adjacent to the retail, there is a consistent base to support an amount adjusted exactly to the quantity of residents within walking (or elevator/stairs) distance. Quality of place then creates a larger draw which means more demand and a larger center.

4-Dimensional Convergence can refer to time of day, but more precisely I’ll use it to suggest a multitude of useful forms of transit converging in one place, within certain time periods of each other, which requires some degree of regularity of arrivals. For mass transit, this means dependable and preferrably frequent stops nearby, with little to no changes in form of transit. Also, quality of place matters, creating a perception of safety for drivers, bikers, and walkers to feel comfortable arriving at any time of day.

Eventually as cities re-adapt to an organization less dependent solely on the auto, various retail “centers” will emerge into a hierarchy based on the quality of and quantity of types of convergence, ie to simplify necessarily, having 1 form would be a neighborhood center, 2 forms of convergence a town center, and 3-forms a regional center.

This is why, in Dallas, I know West Village/CityPlace will be successful as it continues to develop; I believe downtown will emerge from its slumber once again as it has these advantages built into its “Urban DNA”, and traditional shopping malls like NorthPark can continue their success ONLY if they maximize all three forms of convergence. For NorthPark specifically despite its ongoing success in comparison with most malls, this means improving and simplifying connectiong to DART, as well as infilling its surface parking lots with residential density, pedestrian-friendly street grid, quality public spaces.

Meanwhile, as we live our own Dallas-centric exploration into the 21st century city, our neighbor to the West is working on a project that has similar level assets, if not more than any particular neighborhood in or near Dallas. This would be the new development at West 7th.

It has the cultural district within eyesight, is close to a Trinity River that is currently an amenity, closer to its downtown, is directly on the main link between downtown and the cultural district, whereas McKinney, the uptown main street is a right turn out of downtown. Using Hillier’s axial studies, suggest each such redirections can have a profound affect on urban success or lack thereof, per axial shift.

West 7th the street is exactly the kind of overly wide arterial that materializes when design criteria is limited solely to traffic flow. Still speaking generally about arterial design, any aesthetic concerns for the pedestrian are an afterthought and appear exactly as such, and thus are not effective. 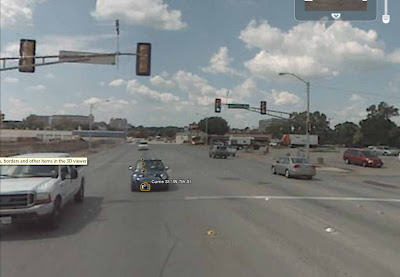 This kind of design typically leads to the type of decay and disinvestment of the immediate area, that ironically drives land value low enough that it can then be redeveloped into something better when efforts coalesce and a developer is confident that his surroundings will improve as well, protecting his/her investment…which is exactly what has happened here. In some ways, it just reinforces the idea that places often have to bottom out before they get better (see: the amount of attention and intelligence directed at Detroit currently.) 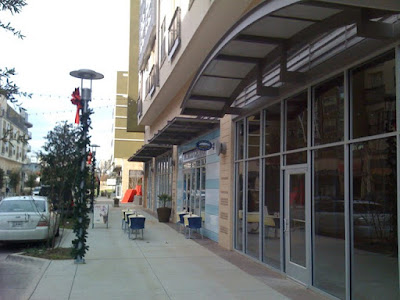 The plan at the W. 7th project creates its primary “place,” one street parallel to 7th. You could say that this is a mistake from a theoretical standpoint, but as I stated in another recent post, it is a necessary compromise. The primary concern must be to build enough critical mass to create a “place” from Day 1, something that holds together. This, to date, has been the inherent flaw in the neighboring project Museum Place, which one might argue has the superior architecture.

The plan and design at W. 7th understood all of these issues. The potential of the future, but the necessity to hedge bets if 7th was never fully to become a street designed as both link and place.

Seeing that 7th currently is not a street designed for people (who would live on it right now?), they’ve done exactly what they should have done, not completely turn its back on 7th, but ingratiate itself with the grid as well as to design flexibility and adaptability of the building to interact w/ 7th in a way that can change hand-in-hand as 7th evolves. Success now. And predictably moreso in the future.

Once 7th is redesigned as a more pedestrian-friendly, complete street, it has the opportunity to be a “place” itself – as streets can be either links or places themselves. Currently, as with most streets it was designed specifically for moving traffic, meaning it is a link – but to maximize value and well-being of the local citizenry.

Why is it important to flip the modernist inside-out street design back to rightside-out? Because there is the most energy there – if and when an arterial can be designed to be amenable to humans – then the most valuable uses will clamor to occupy space on that street to minimize the distance or disconnect from energy of people movement and their direct access…facilitating commerce. That distance is a cost increment extracted from the local economy: a fraction of a cent, multiplied over however many millions of transactions, like in Superman 3. 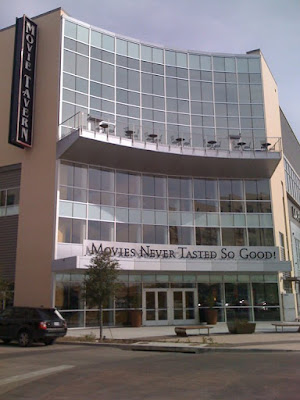 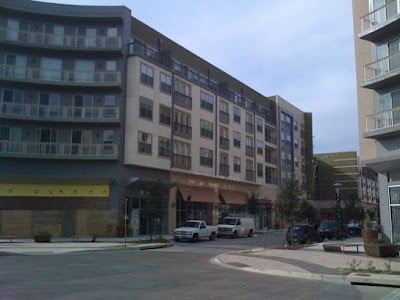 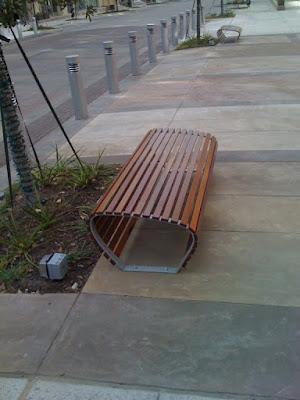 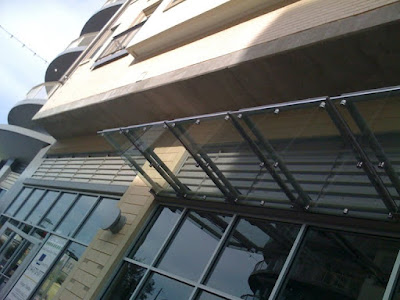 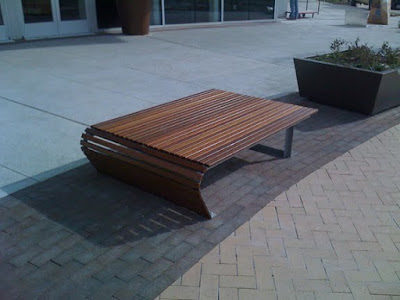 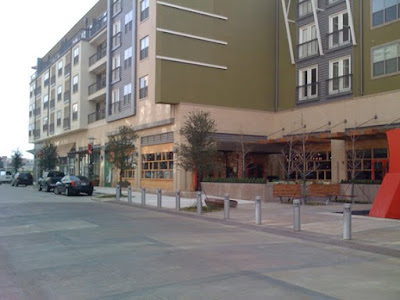 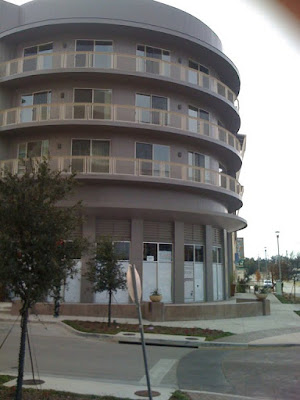 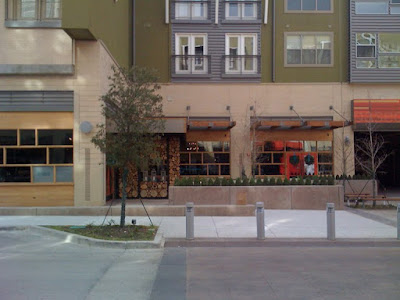 —————————
My last point is about the nearby Museum Place. As I stated, in my opinion it has excellent detailed architectural design and landscape architecture, but it doesn’t yet feel like a place. With the efforts at the Cultural District, W. 7th, and Fort Worth’s streetcar efforts, eventually it will. Like all cities throughout history that grew together, morphed, and coalesced, eventually it will all feel like one coherent place; a center close enough to downtown that provides a positive feedback loop with downtown Fort Worth, utilizing 7th street as the chains of the bicycle between pedals and spokes.

As of now however, the real story of all of this is that with its excellent detailed architecture and landscape design, Museum Place is held back by the street design around it. 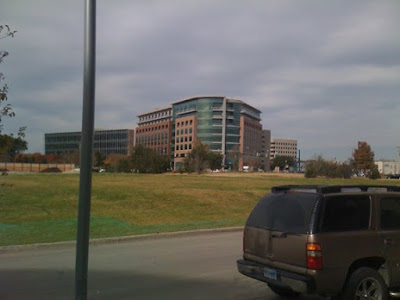 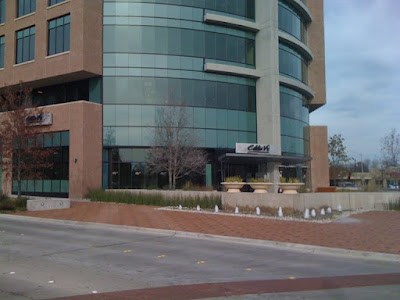 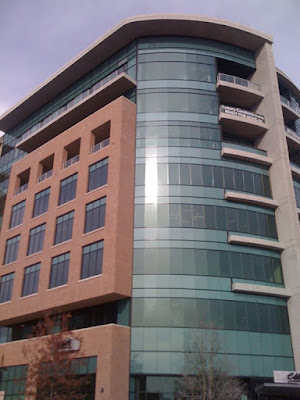 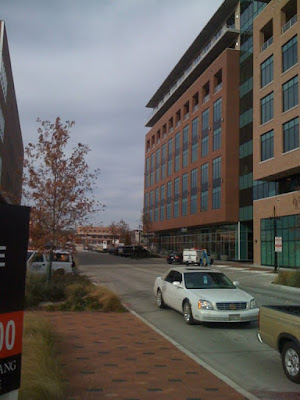 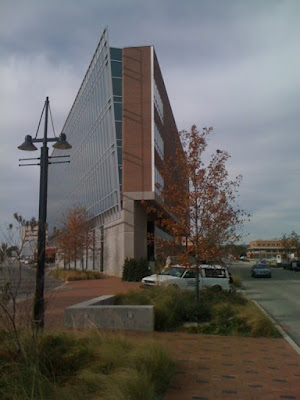 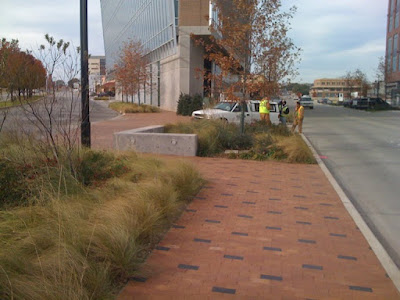 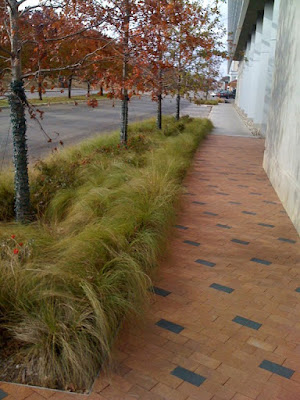