I’ve mentioned WalkScore on here before, here, here, and here; the rating service not unlike any search engine that applies proximate relationships of various businesses. We’ve discussed many of the limitations on those links and in the comments discussion, mostly dealing with WalkScore being a simple metric that measures nothing more than distance relationships but nothing of the quality of the walking environment, with the implication that if things are close together, it is obviously easier to walk from one place to the other, but are there sidewalks? Do you have to dodge bullets, Avi?

Well, a GIS company in Philadelphia has released the beta version of the next evolutive level in walkability metrics by applying various factors, individualized based on priority (crowdsourced?) and adds in necessary metrics of violent crime, illicit activity (not quite sure what that entails yet), etc. Essentially allowing visitors to apply their own livability factors to determine the most desirable areas for them. Meaning that the more of things you find in a livable community are in one place, the greener it will be. A higher quantity of things that detract from livability, then in turn detracts from walkability, and you get a red blob.

I highlighted the freeways in Photoshop to illustrate the correlation between walkability and factors that deter walkability, which I included at -5 violent crime and illicit activity. The only two areas that vary from this are UPenn (which has made significant investment in the areas around their campus to increase livability by way of mixed-use and housing opportunities – their enrollment applications have spiked as well) & 30th St. Station areas and along 676 (**thx to Dallas Progress for the correction — when all else fails, I’m stupid and easily transpose concurrent thoughts) which is a sunken freeway near Old City, much less obtrusive than sunken freeways we have 75 and Woodall Rogers (hint: b/c Woodall Rogers rises after a few blocks on both sides). The red areas get much worst in South Philly along I-95 near the stadiums, port, airport, and other industrial sectors. 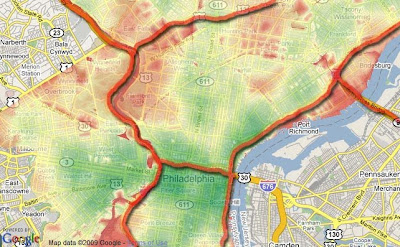 Anyway you slice it, the greenest areas are typically going to be Old City, Downtown, parts of South Philly, and Walnut Hill/UPenn. But, we already knew those areas were walkable.