Making my way thru Green Metropolis, I’ve realized two things. The first is that the author David Owen has reached similar conclusions as to some of my previous Livability Indicators, from a similar freakanomics “you wouldn’t expect it” sort of way. The other is ones that I’ve been planning on writing for sometime have also been covered in his book. Boohoo for me and my imagined originality.

So, I’ll let him take the start, and I’ll add from my own experience:

New Yorkers don’t necessarily appreciate the real reasons that walking is such an important element of their daily life. In the late 1990s, Rudolph Giuliani, then the mayor, undertook a campaign to eradicate jaywalking – a major issue for him. Pedestrian barriers were erected near a number of midtown corners, stoplights and pedestrian crosswalks were shifted away from some intersections, and the police were instructed to issue summonses to pedestrians who crossed streets mid-block or against a light. The policy was almost universally ignored, by cops as well as pedestrians, and it was widely ridiculed.

The policy was also thoroughly misguided. In Manhattan, creative jaywalking is an environmental positive, because it makes traveling on foot easier: it enables pedestrians to maintain their forward progress when traffic lights are against them, and to gain small navigational advantages by weaving between cars on clogged side streets – and it also keeps drivers on their guard, forcing them to slow down.

This is a key point in general. Make drivers worry about dinging their car or having to spray annoying pedestrian brain matter off the grill of their hummer will make them slow down a bit. When they are channelized and the driver can zone out b/c of engineering for dumb drivers rather than forcing us to be smart and aware is when accidents actually DO happen, in the places where street space is designed for peds/cars to have the least amount of interaction.

The real purpose of anti-jaywalking laws is not to protect pedestrians but to make life easier for drivers. That’s why anti-jaywalking rules are enforced (and observed) in Los Angeles, where the cars are entirely in charge.

On what planet does it make any sense whatsoever to put in place policies in order to protect a 4,000 lb piece of death-wheeling machinery vs. a human armed with nothing but a pair of tennis shoes, and perhaps a leashed puppy or two?

Rather than banning jaywalking, cities should take steps to enhance and enforce the rights of pedestrians, and to impede cars in areas where traveling on foot is feasible. (One useful step would be to follow New York City’s good example and make it illegal for drivers to turn right on red lights).

Have you ever noticed how much safer and more polite Dallas drivers are when traffic lights are out, operating as blinking reds and the drivers are left to their own devices, responsible for their own safety. Interesting how they begin to cooperate with other drivers, no? Well, I have noticed.

Similarly, four-way stops are drastically much safer than any other form of regulated intersection. One reason is b/c of reduced speed in areas where stop signs are utilized rather than signals. The other primary contributive factor, is that (although not necessary due to literally written protocol for who goes first at 4-way stops) there is a necessary communication to some extent between the drivers: eye contact, a slow roll to indicate that “I’m moving. Hold back buddy,” maybe even a honk or two…or this.

That communication, whether verbal or nonverbal, makes something infinitely more intelligent because there are now feedback loops.

Tightly controlling pedestrians with a view to improving the flow of car traffic just results in more and faster driving, and that makes life even harder and more dangerous for people on foot or on bikes.

Not to mention it allows drivers to tune out by funneling them virtually (and sometimes literally) into cattle chutes.

Essentially, it’s creating some measure of chaos in the streets. Ewwwww, engineers hate chaos. Their theocratic formulas can’t dictate, their metrics can’t measure. Can. Not. Compute. But, you can via safety statistics, measures of happiness, quality of place and real estate development on the street. For example – when the Champs Elysees went all travel lanes, all of the businesses died. When returned to parallel slip lanes w/ parking and wide sidewalks, it has become some of the most valuable floor space in the world.

To some extent, it is pushing the idea behind the Woonerf, or shared living space. The name comes from the fact that this is more residential in nature, the street as front yard for the residents, where children can play safely in the middle of the street w/ mother’s watchful eye peering out the kitchen window. And they can, because the business (visually) of the street, the narrowness of the travel lanes, the lack of definition of the travel lanes (ie there are no 12′ wide rights-of-way dictating direction), slows traffic. In sum, it’s a free for all. See some pictures here (bottom of the post).

But, that is strictly for less busy streets, what about for the traffic flow worthy of New York streets? Rome has busy streets, with absolutely batshit insane cab drivers. Having lived there long enough to emerse one’s self into the culture at some level deeper than tourist, you find out funny idiosyncracies only possible thru thousands of years of evolved urbanism.

One such custom is that it is commonly accepted that if a car were to strike and injure a pedestrian in Italy, the driver is at fault no matter the circumstance and fully responsible for all care necessary. Whether this is real or imaginary (it isn’t written anywhere), it is clearly taken root as an effective deterrent. No matter the road, cars will stop for you if you start crossing the road. Be it at a crosswalk without the proper signalled permission or at mid-block.

Corso Vittorio Emanuelle is the actual road, where I would often test the custom, and do the proverbial test of trust: falling blindfolded and seeing if the Roman Customs would catch me in a shielded coccoon of safe pedestrian passage. Why? Well, b/c I crossed it every day and it was probably the busiest road I saw the majority of my days. 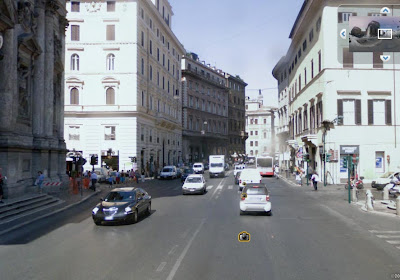 Corso Vittorio Emanuele – This road feels so much smaller, revisiting in Google Earth. Seven years in Texas plays tricks on perception and memory, I suppose.

What’s the moral of this story? Power to the people, that’s what…and away from the honking machines and you’ll see positive returns for your city by way of renewed vitality, caramelized and cooked to a tender medium rare with a side dish of nicely seasoned safety.