Little puppet made of pine, awake. The gift of life is thine.

If we do anything well, it’s a self-promotion that borders on boastfulness. Perhaps there is some fundamental ground to base it on, other times, not so much. Newsweek, long ago giving up its title as worthwhile in-depth reporting outlet, has put forth a review of the Dallas Arts District in, “Deep in the Art of Texas.” A quote:

When the entire arts district was mapped out in a Dallas city plan in the 1980s, the site was a sea of parking lots wedged between a freeway and the business district. De Grey, a Londoner, recalls one of his first trips to Dallas, when he emerged from “a downtown restaurant at 9 o’clock and there wasn’t a soul on the street.” More recently, downtown has become home to young urbanites lured by gentrification; the expanded arts center has surely helped spark the trend and is expected to attract more development. “On a Saturday morning you can go downtown and everyone is out on the street, walking their dog, going to the gym,” says Lawrence Speck, former dean of the University of Texas architecture school. “It’s miraculous.”

Is that so Professor? Miraculous is a bit strong. Last Friday, I walked down the middle of a wide and should be busy street by the Arts District for over a block….because I could. There were no cars, less people if counting via census standards.

Now I’ve never met Larry Speck, and I’ve heard nothing but praise from colleagues that do know him, but I worry about this kind of talk, especially with regards to the two newest projects going on, Complete Streets Initiative and the Downtown 360 Plan.

Dallas has managed to avoid the grandiose errors of its New York forebear with a pedestrian-friendly layout, generous public spaces, and architecture that begs for your attention.

This sounds as though it was written by a P.R. department. Do you know why marketing has lost traction with the Millennial generation? Because they feel as though advertisers are lying to them, which in many cases, they are.

I have no doubt in my mind that the Wyly and Winspear are absolutely amazing on the inside. But, as we found out with Medical Districts (like any “district”) what is INSIDE the walls of the facilities and/or institutions is generally unrelated to the quality and success of a district. The experience OUTSIDE the walls defines the district. To call the Dallas Arts District pedestrian oriented is like calling a Grapevine Mills Mall pedestrian-oriented. You drive to it, you park in a garage, you walk around inside for a little bit, then you get back in your car and drive home. 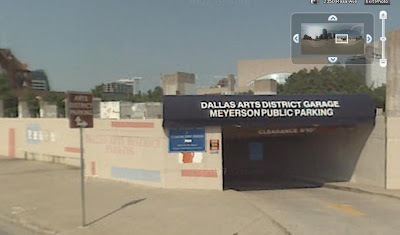 This wall once had children playing painted onto it. B/c ya know, no children would ever actually be found playing anywhere near it.

The Arts District is by no means a fait accompli. But, like Main Street (and beyond) it’s bones and connective tissue have to be fundamentally altered to ensure as many connections outward as possible, redoing the streets to make them BOTH more “complete” and contextually-sensitive (this is my primary worry with the complete streets initiative – that it will add bike lanes, transit, etc. and forget to be context-sensitive nor narrow the streets).

The author concludes by asking a similar question:

But weaving it all together to create a dense and urbane neigh-borhood requires more than dramatic buildings by famous architects. Ask the people in another car-centric city: Los Angeles, where the vaunted Disney Concert Hall (also by Gehry) has had almost no effect on creating a street life downtown, even though Gehry proposed a plan, never instigated, to help do just that. “It’s almost impossible to design a city,” Piano, architect of the Nasher Sculpture Center in the Dallas arts district, once said. “What makes a city beautiful is that it’s not designed. Time makes cities beautiful.”

Well, yes and no. Yes, it does take time, but suggesting you can’t design a city is a cop out. An excuse to do whatever you feel on a building and in some cases, turn your nose up at the city entirely. What we CAN do is create the framework for investment for people places.

Make the streets more livable, and we’ll see the necessary “fabric” infill around the architectural icons giving them an entirely new life, making the area truly mixed-use, and populating the Arts District with something more than painted people on the walls.

Sometimes I get the sense that the term pedestrian-oriented is, at best, misunderstood and at worst, bastardized. The fundamental point of something being pedestrian-oriented is the proximate connectivity of a multitude of people, places, uses, businesses, and things all interacting, communicating, and providing enhancing feedback loops. This is why cities have always been the fundamental human tool for wealth creation, because of how they are structured.

“Your car is like your mother in law-if that’s the only thing you have, you’re in trouble.” -Jaime Lerner

If we don’t address the streets and take the dominance away from the automobile, none of these areas will be true successes as they won’t stimulate synergies between them. Rather than a quilt, we’ll have a bunch of useless patches:

Diagram showing the catalyst for development potential of D2, stitching disparate districts together, currently these districts float without coexisting nor benefitting from proximities to each other. The traffic patterns and the goal for level of service A ZOMG! are the primary reasons why: 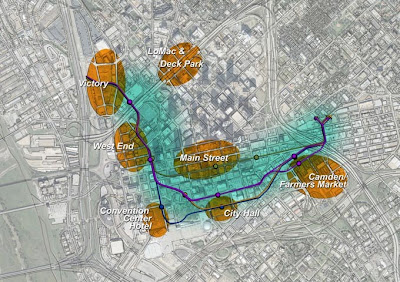 There is no overlapping of these sub-districts b/c arterials form moats around them. The roads go THROUGH places not TO places. The arterials are important for linking places, but once inside the roads should be so much about movement as convergence, becoming sociopetal, rather than sociofugal once inside.

One of these days, I’ll get finished the Dartmstadt Case Study, which examines a “complete street” with traffic flow, tram, bike lanes and sidewalks, and illustrates how the engineering and design of the entire road changes based on whether it’s in the downtown core, the arterial linking downtown to its “suburbs” (which are completely walkable and mixed-use, just less dense), and in the suburban core, which functions as a small downtown.