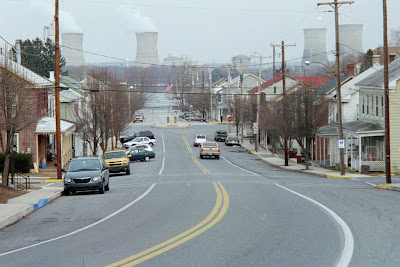 Completely off-topic, but noteworthy as we debate how to handle our energy needs in the coming century. I was one-year old and grew up only a few miles from Three Mile Island. [I take that back, I was 5 months-old.]

Harvey Wasserman at the Free Press on the cover-up of TMI’s true damage:

research at TMI also uncovered a plague of death and disease among the area’s wild animals and farm livestock. Entire bee hives expired immediately after the accident, along with a disappearance of birds, many of whom were found scattered dead on the ground. A rash of malformed pets were born and stillborn, including kittens that could not walk and a dog with no eyes. Reproductive rates among the region’s cows and horses plummeted.

Much of this was documented by a three-person investigative team from the Baltimore News-American, which made it clear that the problems could only have been caused by radiation. Statistics from Pennsylvania’s Department of Agriculture confirmed the plague, but the state denied its existence, and said that if it did exist, it could not have been caused by TMI.

In the mid-1980s the citizens of the three counties surrounding Three Mile Island voted by a margin of 3:1 to permanently retired TMI Unit One, which had been shut when Unit Two melted. The Reagan Administration trashed the vote and re-opened the reactor, which still operates. Its owners now seek a license renewal.