Yes, that was yelled at me last night as I walked my two mutts to the downtown bark park, which is situated cozily under two freeways. An ever present reminder that at any moment a truck could fall off the highway and crush you. [FYI, I’m not making light of this girl’s death. Remember my point is the ridiculousness and the corrosive and destructive nature of these freeways. Consider her collateral damage.] 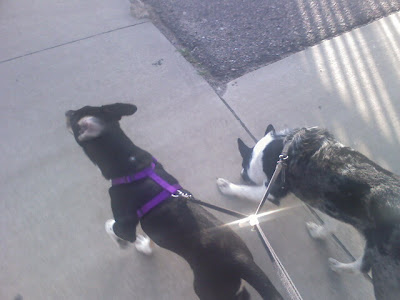 Without further ado, and all due respect to A Tribe Called Quest, here is the scenario. I’m standing at the corner of Jackson and the aptly named Central Expressway intersection as diagrammed below. 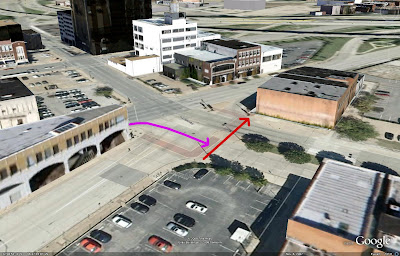 Commerce and Jackson form the ‘V’ around the very unique Dallas Observer HQ. When that one-way couplet got the green light, I as a pedestrian also got the walk light. So I give the dogs the giddy-up and we start crossing. The moment I step foot off the curb, I notice a car (will not disclose make or model so as to avoid stereotypes) turning right from Commerce to Central Expressway.

Call it some form of inherited female intuition from growing up in a household of females or whatever, but I knew this car was going to cause problems even from 100 feet away. But before I even got to the median, a ridiculously inflated three lanes away, the car reached me at the conflict point as the diagram shows. At this point the little pedestrian man-light had flipped to blinking red hand. Still, my right-of-way. But, not in Dallas.

To this driver’s credit, I’m quite amazed at how skillfully he maintained the exact speed at which to appear threatening to me and my dogs and to just miss us by a mere inches. So having enough ingrained “Philly” in me, I immediately turn back with nasty glare in tow about to say something myself to the driver clearly at fault…and a douchebag.

But, he beat me to the punch, leading to the aforementioned profanity…with family in his car no less. But I still don’t understand what the hell he wanted me to read??? Were their hidden words in the blinking hand, a subliminal message perhaps? Or, I don’t know, perhaps the law which states that pedestrians in the crosswalk have the right-of-way. Nonetheless…

At that point, all I could do was defend myself and say I still had the light. Alas, that means nil in Dallas, a world devoted to the car. Right-of-way, schmite of way. This road is made for drivin’. Out my fuckin’ way dog walker.

The problem isn’t that Dallasites have some preordained divine right to driving, as if all drivers can operate their administers of death as they please. It is that we have designed and built roads that instill this sense of entitlement.

Now in sane, rational world, who does it make more sense to protect via street design? The dog walker living in downtown AND currently walking in downtown TO the designated downtown dog park?! Or some shit head willing to make a point by driving in an aggressive manner and following it up with aggressive personal behavior. I hope your home gets foreclosed.

Now, here is a map of streets that have zero functional use at their current width or configuration strictly as something beyond car movers, aka escape routes. Because as we know public rights-of-way are largely for two purposes. Transportation and public space to address upon. Downtown streets get an A from engineers for level of service. They get an F for doing their job as downtown streets. These essentially mean roads that are currently too-wide (notice Pearl doesn’t make the cut), streets that are one-way (retail fails on one-way streets, FACT), and lastly, roads engineered with turning radii designed for high speed movements: 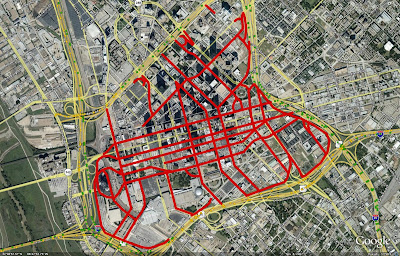 [Not scientific or thorough. Rather reactionary actually.]

Good luck businesses, residents, pedestrians, and developers trying to find good streets to do your business on. Instead, my dogs will do theirs…and I, of course, will clean it up dutifully.