I’ve been noodling on this idea of CrowdSourcing today while at work and just trying to get my head fully around the dynamics and the direction that it is taking us and its relationship between business and governing. I guess this all stems from listening to Robert Kennedy Jr. once talk about the free and fair market is the most democratic form of economics. So, the two ideals are free and fair markets for economics and democracy (beyond representative democracy) of an educated and intelligent electorate.

Where are we on the path to those ideals and are they intertwined and interrelated, improved forms of self-organization?

But, if on one side we have a group, let’s call it the market. And, on the other side of the room, we have an all-knowing individual. Let’s call him the supplier. This doesn’t sound terribly democratic [with the assumed caveat that self-rule is indeed the ideal]. In fact, this sounds closer to a economic dictatorship (benevolent or brutal). “You will buy what I give you” or in the benevolent case, “here ya go.” Actually, it sounds very much like supply-side principles.

So, (obviously while skipping steps for the sake of rhetoric) the next step was to start focus groups and the like. Asking the market, “what would you like us to provide”? This is starting to sound like a democratically representative economics which is what we’ve known the most in this countries history with occasional lapses in both trade and governing towards the former.

Then, today I get emailed this. The Obama administration has said repeatedly that they plan on being the most transparent government in this country’s history, blurring the gaps between market and supplier, source and end-user, by asking the country what topics and issues are most important to them and (presumably) addressing them eventually. This seems to me an excellent method of setting up a hierarchy of punch-list items (functionally useful) while maintaining a link between constituents and representatives, with governance following the ground-up movement towards a more democratic economic system (theoretical and improvement).

In a way, it seems like the internet is approaching the forms of Athenian democracy where everyone had a vote and Socrates ranted against for its inertia towards mob rule of the less-informed. The key adaptation (at least in this detail) however, is 1) there is still a seperation between mass and elected officials, but also 2) the very subtle inclusion of voting on the issues and questions raised allowing for the most pressing and prescient issues to rise to the top of the list.

Similarly, business models are popping up all over the place, all web-based b/c of the necessity for flexibility in organizing. YouTube replaces Television as Millennials begin to entertain themselves rather than fifty-something TV execs. We know that Millennials watch less TV than the preceding GenX, but internet consumption is up. They know what they want and they’re doing it, rather than waiting to be spoonfed a bland, focus-grouped inferior entertainment product.

And, now we also have companies like Threadless, et al., allowing consumers to create their own product for a cut of the share. Fashion designers replaced by consumers. Everyone and anyone can be one; no longer some entrenched group hidden away defensing their way of life. In a way, it is approaching a perfect market for ideas to be tested where the best are naturally sorted to the top. As Neil Takemoto writes, this is the essence of the Creative (Class) Economy rather than the artist enclaves colonizing run down warehouse districts. 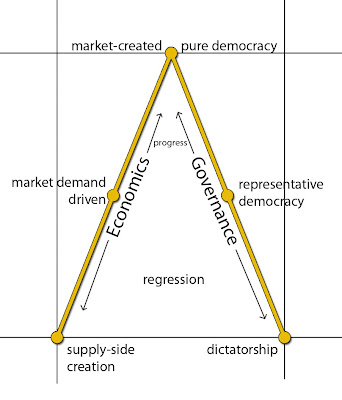