Reminds me of a quote from an article I read long ago on street cars. “Street cars are sexy as opposed to buses. Developers don’t write checks for buses.”

Downtowns Across US See Street Cars in their Future.

More than a dozen have existing lines, including New Orleans, which is restoring a system devastated by Hurricane Katrina. And Denver, Houston, Salt Lake City and Charlotte, N.C., have introduced or are planning to introduce streetcars.

How does Dallas not get mentioned? We have both an existing line and lines being planned (hint hint) as well as the most extensive system in US history at one point, largely still under the roads.

And, of course, since this is what journalism has been reduced to, divide every issue into two halves with equal voice even though public opinion might be 99 to 1, Randall O’Toole (emphasis on the latter part) gets his say:

Critics, including Randal O’Toole, a senior fellow at the Cato Institute, a libertarian research organization in Washington, and an expert on urban growth and transportation issues, counter that growth along streetcar lines is dependent on public subsidy and of little use.

“It looks like it’s going to take you somewhere, but it’s only designed to support
downtown residents,” he said. “If officials fall for the hype and don’t ask the
hard questions, voters should vote them out.”

I still haven’t quite figured out what makes this dude an “expert.” He wrote a book. Big deal. He’s a shill for the sprawl lobby that sh!ts publishing dollars to express their “view” (i.e. protect their assets – that being a failed way of living – and keep us all in cars, guzzling gas, sucking fumes, and killing each other in fiery metallic collisions).

I’ll leave the last word to a guy who knows what he’s talking about:

“One happy consequence will be that streetcar customers who live in the area will be less mobile by choice,” said John Schneider, a Cincinnati real estate developer and downtown resident who championed an unsuccessful 2002 county sales tax proposal that would have financed a regional light rail system.

Since then, gas prices have risen sharply and advocates have started emphasizing streetcars’ ability to revitalize urban neighborhoods.

“In years gone by, people would move to cities to get a job,” Cincinnati’s city manager, Milton Dohoney, said. “Today, young, educated workers move to cities with a sense of place. And if businesses see us laying rail down on a street, they’ll know that’s a permanent route that will have people passing by seven days a week.”

Two astute points. The more original one being that commercial businesses NEED predictability, in the way that one-way roads fail them. The other is that they generate returns on initial public investment in the form of private investment and increased tax base – which is what the quote at the top gets at.

Funny enough, the man that espouses Houston and Atlanta (which are both attempting to improve their image/downtowns) actually lives in Portland. In a word, O’Toole is a dinosaur. Perhaps the one Jeezus is petting: 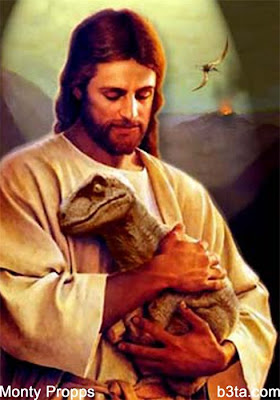 What a cute ravenous little agent of death…

O’Toole travels extensively and has spoken about free-market environmental issues dozens of cities. An Oregon native, O’Toole was educated in forestry at Oregon State University and in economics at the University of Oregon.

So first thing’s first, and I can’t read this without cracking up, but because he “travels extensively” that makes him an expert on urban planning? I think I shall hire Robin Leach as a Market Research consultant and Paris Hilton as Civil Engineer on my next project!

And secondly, don’t most folks GET DEGREES when they go to college or list them on their C.V.? Some schmuck that dropped out freshmen year after two months of frat hazing and temporary presence in an lecture hall qualifies as “was educated.”

But of course, his credit hours in Econ 101 in Eugene tell him that the $2 billion R.O.I. on $25 million of 2 miles of street car track are a bad thing.

“But, but, but, but, Exxon Mobil and AAA told me to say those mean things! They pay my salary!!!” ~ Merely paraphrasing what he says in every Op-Ed, report, and speech for Cato Institute – the home for bastardization of Jeffersonian libertarianism.