The Convention Center That Ate Dallas

A couple of weeks ago, after reading that the taxpayer-funded Dallas Convention & Visitors Bureau apparently wanted to lend us the letter “D” from their “DALLAS” logo to replace the City of Dallas’ existing letter “D” logo, I got to thinking once again about the outsized influence the DCVB wields over municipal affairs.

Late last year, after Philip Jones, the DCVB’s president, tossed out a plan to have taxpayers pay for a $300 million addition to the convention center, I took a look into the finances and found that it lost $37 million per year before debt service and $54 million after interest expense — amounts that were virtually identical to its losses prior to the opening of the half-billion-dollar city-owned Omni Convention Center Hotel in 2010 (one of the primary justifications for building the hotel was that it would drive more business to the convention center and stop its losses). Some of the most interesting observations, however, came from reader comments to my post. Former city council member and the executive director of the Dallas Arts District, Veletta Lill, made the following observations: 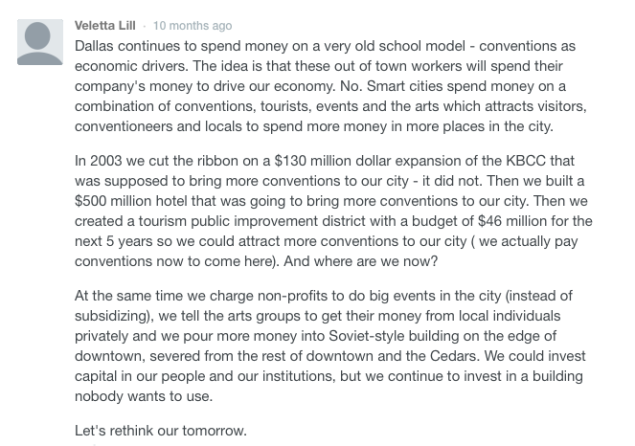 Mike Rawlings’ former assistant Sam Merten, an award-winning investigative reporter and most recently a candidate for Dallas city council, directed us to two articles he penned for the Dallas Observer. In the first, he pointed out that Mr. Jones was making $590,000 large as far back as 2008, while in another story, he pointed to some questionable behavior by Jones in making the case for the building of the convention center hotel.

In any event, I was pleased to hear Jones tell the Dallas City Council’s Economic Development Committee on August 17 that the “economic impact of the Convention Center is growing” from $662 million in FY 2014 to $762 million in FY 2016. That’s an increase of nearly 15-percent, which is amazing in two ways: first, it’s a big jump; and second, it reflects Jones’ uncanny ability to predict the future. I got further reassurance from John Crawford, the president and CEO of Downtown Dallas Inc., who told the Dallas Morning News‘ Rudy Bush during a recent interview: “our convention business is growing…”

In an attempt to get a better understanding of the true power of this “economic engine” (Dallas people really seem to like that term), I decided to check the City of Dallas’ most recent financial report, for fiscal year 2014 (which ended Sept. 30, 2014).

The first mention I saw of the convention center’s power was near the front: “events including the U.S. Conference of Mayors, the New Cities Summit 2014 and the Mary Kay Annual Seminar reinforce Downtown Dallas’ position as a convention center by generating over $700 million in economic impact.” Wow, I still didn’t understand how economic impact was measured, but that sounds impressive. Except… wait a sec, didn’t Jones tell the Economic Development Committee on August 17 that the number was $662 million? And isn’t $662 million less than $700 million? Which number is correct, the number in the city’s financial report or the number in the city council briefing?

Skimming forward a few pages, I dove into the “Management’s Discussion and Analysis” section for further enlightenment. And sure enough, they had something to say about the convention center: “Convention Center customer charges decreased $3.7 million from the previous fiscal year primarily from a change in the type of events held at the Dallas Convention Center Hotel and related event revenue.” Wait, what? Revenues are going down, and they are blaming it on the hotel we just spent half a billion dollars building? Continuing further, “Major events held during the fiscal year included Great American Trucking Show, the American Heart Association Annual Scientific Sessions, the Mary Kay annual convention, the National Congress of Christian Education and the Lone Star Classic volleyball tournament.” Then, further down the page, “Convention Center contractual services increased $1.4 million due mainly to increases in advertising expenses.”

Ugh… this didn’t sound good. Still, I needed to know total gross revenues to get some perspective on the $3.7 million. On page 14 of the financials, I found the number: $24.2 million in convention center revenues. Just eyeballing it, $3.7 million seemed like a BIG drop in revenues, but I decided to pull the 2013 financials just to confirm the number from a year earlier. Sure enough, on page 14, $27.9 million in revenues for the prior year. Compare those two numbers, and we get a 13.3-percent decline in revenue, year over year. And this in a robust economic climate. Sure, the convention center business may be “growing,” but at what cost?

It sounded like time to take a deeper dive and update the financial analysis I performed last November. This time, however, I decided to make a couple of modifications. First, I decided to ditch the Calibri font — too pedestrian. Instead, I used Avenir, which makes me feel like more of a winner. Secondly, I decided to use accounting depreciation, rather than actual capital improvement expenditures, to get a better handle on the facility’s true economic income, making the assumption that maintenance capital expenditures should equal accounting depreciation. Why? Because the City appears to have been significantly underinvesting in capital maintenance (sound familiar? I’m looking at you, Mockingbird Pothole for City Council!). 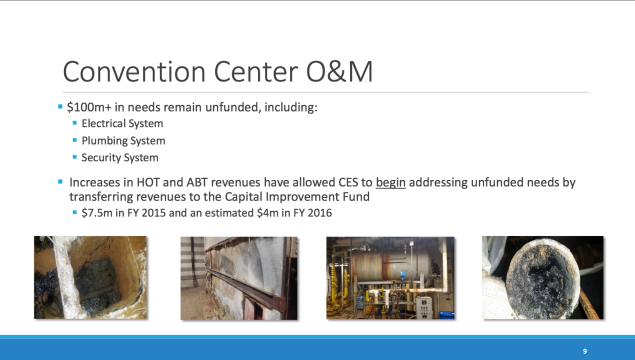 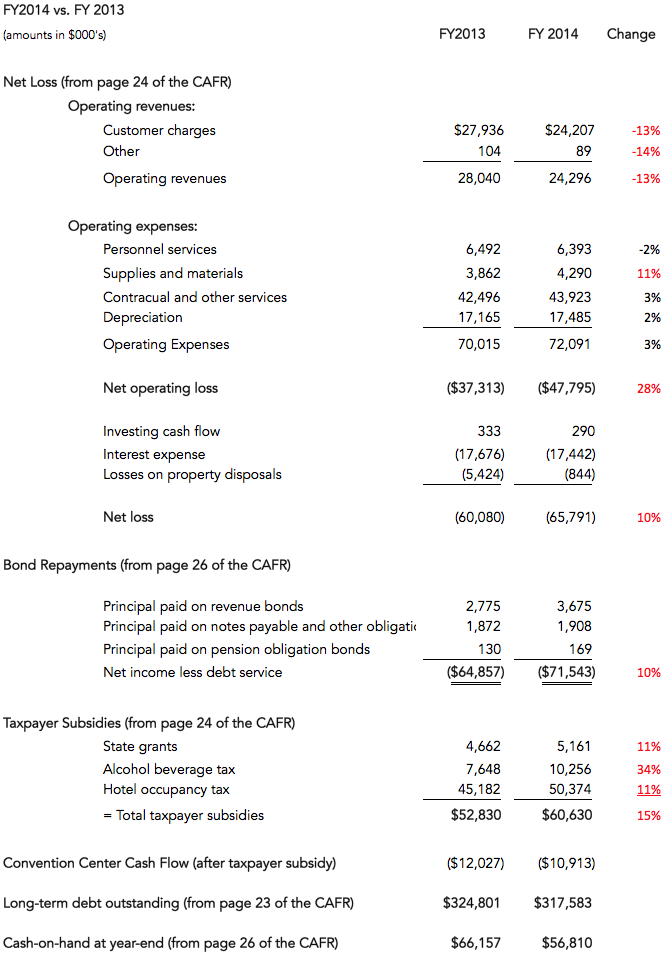 So, a few things to note:

Also, one other baffling disclosure that I could make neither heads nor tails of: the city appears to have used $6.8 million of cash in the convention center’s accounts to pay two years’ worth of rent on the American Airlines Center, which is actually leased to a third party (see 2014 CAFR, page 9). Surely that can’t be right, the city wouldn’t pay rent to itself, so I would appreciate it if someone could explain what happened in the comments section.

Now, obviously, the economic activity generated by the facility isn’t directly correlated with its gross revenues. But, still. How is economic output measured? According to Jones’ briefing, only one additional “citywide” meeting appears to have been booked in 2014. Similarly, CVB room nights booked barely moved year over year. I also wonder about the nature of the room nights booked. Do they include bookings at hotels in other North Texas cities that are promoted on the DCVB website? 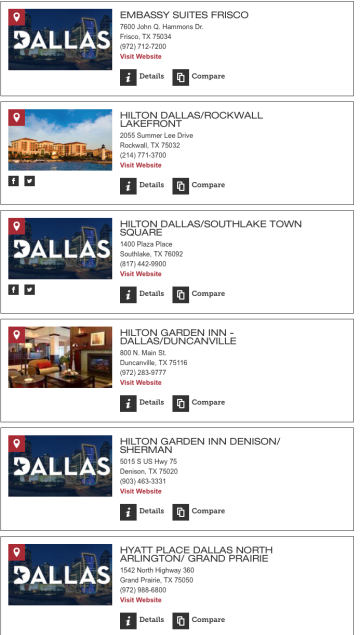 If other North Texas cities are reaping some of the benefits, why aren’t they bearing any of the cost?

Is it worth spending over $70 million per year in taxpayer funds to support this endeavor?  (By way of comparison, the city’s entire streets budget was just slightly higher, at $79 million.)

I’m not totally surprised by the fall off in convention center revenues last year. After all, “the actual number of conventions hosted in the U.S. has fallen over the last decade. Attendance at the 200 largest conventions peaked at about 5 million in the mid-1990s and has fallen steadily since then.” According to the Wall Street Journal, the convention industry attracted “just 86 million attendees in 2010, compared to 126 million in 2000. Meanwhile, the amount of convention space angling for business has increased to 70 million square feet, up from 53 million in 2000 and 40 million two decades ago.

Further research confirms the convention center industry is facing some absolutely brutal headwinds, so I’ll repeat the question Patrick Ishmael asks in Forbes, “do we really believe city leaders have a special expertise that will enable them to beat market trends?” Heck, even Las Vegas’ convention business has been hammered. 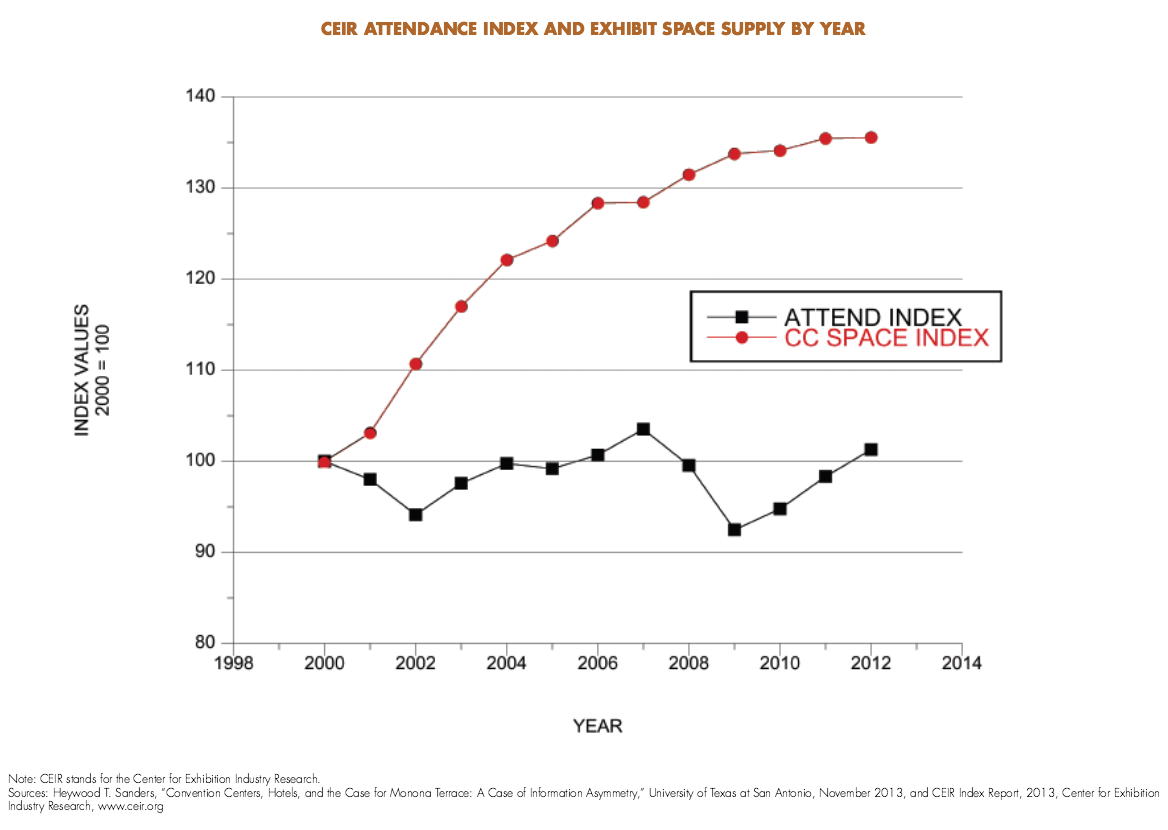 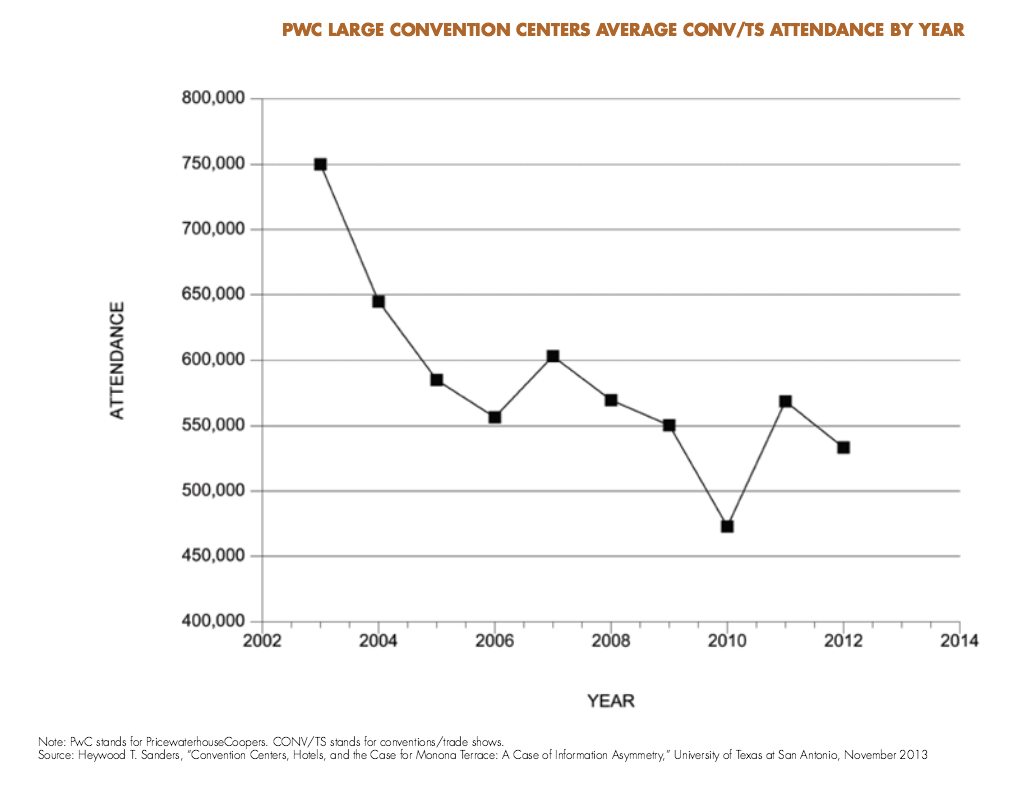 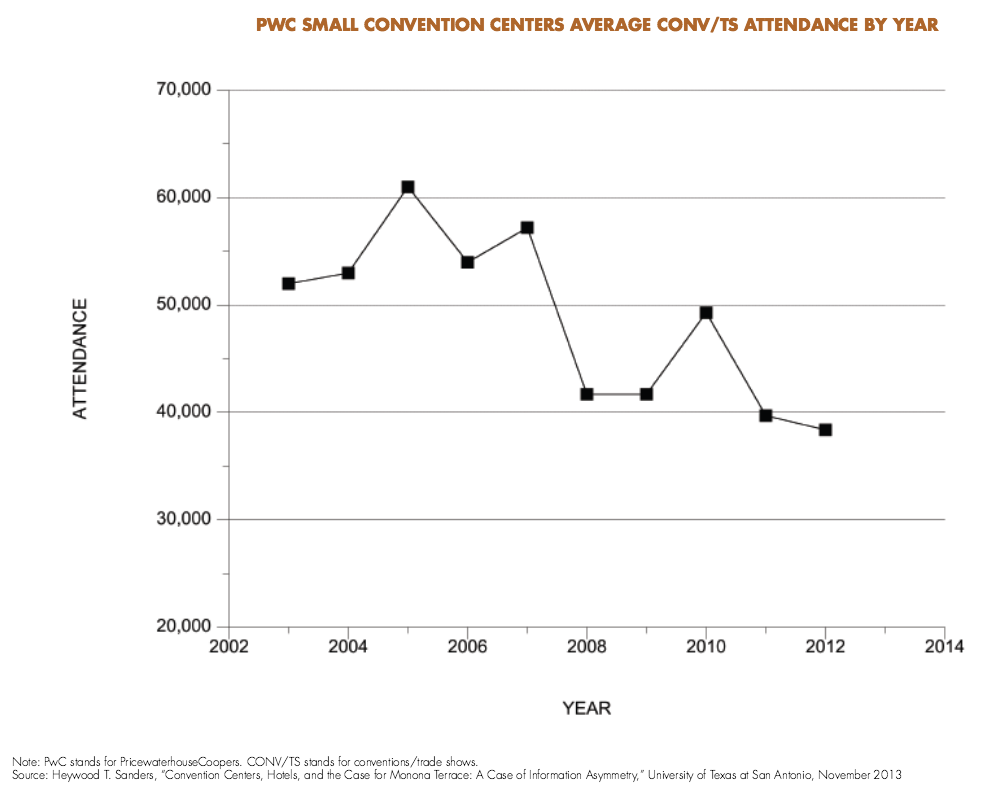 Given the fact that the convention industry is in long-term decline, isn’t it time to think about doing something different, as UT-San Antonio professor Heywood Sanders suggests?

Of the $50.4 million in hotel occupancy taxes being used for the convention center, only $31.8 million is actually pledged to support debt service. Imagine what we could do with an additional $18.6 million each year: innovative, community-building projects that would not only attract tourists, but benefit Dallas residents as well.

Under state law, we could use the money for “the encouragement, promotion, improvement and application of the arts, including instrumental and vocal music, dance, drama, folk art, creative writing, architecture, design and allied fields, painting, sculpture, photography, graphic and craft arts, motion pictures, radio, television, tape and sound recording, and other arts related to the presentation, performance, execution, and exhibition of these major art forms.” I wonder what kind of economic output would be generated by promoting well-funded, innovative, arts-centered tourism?

In addition, we could use the money for “historical restoration and preservation projects or activities or advertising and conducting solicitations and promotional programs to encourage tourists and convention delegates to visit preserved historic sites or museums: at or in the immediate vicinity of convention center facilities or visitor information centers; or located elsewhere in the municipality or its vicinity that would be frequented by tourists and convention delegates.” Are there other historic structures within the city that could be revitalized to attract tourists while also eliminating blight?

Similarly, what if we were able to use proceeds from the new mixed-beverage sales tax for innovative improvements to urban infrastructure that might generate a higher return on investment, giving priority to projects that would not only attract tourists, but make the city a better place to live.

Again, it’s hard to see how continuing to invest in the convention center in the face of massive industry-wide attendance and massive competition. Yes, people are continuing to visit Dallas, and they are doing so in ever-increasing numbers. But they are visiting for different reasons, and we need to address these changing needs and wants. Why not capitalize on the momentum established by the Arts District and Klyde Warren Park by redirecting tax revenues away from propping up a white-elephant convention center towards underwriting exciting arts and entertainment programs that could attract tourists from around the nation? Veletta Lill puts it more eloquently: “We could invest capital in our people and our institutions, but we continue to invest in a building nobody wants to use. Let’s rethink our tomorrow.”

"Honestly the hate—I have to transform it into motivation because very easily I could show them the 214, the Dallas in me," says Sha'Carri Richardson, who is Tokyo-bound.
By  Taylor Crumpton
D Magazine Directories