Enjoy unlimited access to all of our incredible journalism, in print and digital.
Subscribe Now
Advertisement
culture

The company, founded by three White women, decided to give a centuries-old Chinese game a "respectful refresh" that no one asked for.
By Emily Heft | January 8, 2021|11:07 am
Advertisement

The Mahjong Line, a Dallas-based company founded by three White women, has come under fire for redesigning and rebranding a traditional Chinese game and failing to properly acknowledge its cultural significance.

Mahjong was developed during China’s Qing Dynasty and spread across Asia in the 19th century. The game is ubiquitous in Chinese culture; it’s played at family gatherings, among friends, in public parks, and beyond. It’s also popular in the United States, where it’s been widely available since the 1920s. Though the game has spread across the world, most Mahjong sets look very similar to the original design, bearing Chinese characters and symbols like birds and flowers.

That’s why The Mahjong Line’s candy-colored versions, which erase nearly all of the Chinese elements in an effort to make the game “stylish,” caused an uproar.

Kate LaGere, a White woman, and two of her White friends, Annie O’Grady and Bianca Watson, founded The Mahjong Line last November. LaGere learned to play Mahjong in 2018 and was hooked, but decided that the game needed a “respectful refresh” to appeal to modern consumers. Her idea of a “refresh,” amounted to an entire redesign, aimed directly at appealing to millennial females. Each of their tiles is emblazoned with Arabic, not Chinese, numerals. Traditional symbols were swapped for “mid-century,” “cheeky” versions–a bag of flour, for example, stands in where a flower once was. The mats feature slogans like “Get Your Mahj On” and “Not Your Mama’s Mahjong.”

On Monday afternoon, Kathy Khang, an author and speaker whose work celebrates her identity as an Asian American woman, posted a tweet that sparked a conversation about the brand. Almost immediately, criticism for The Mahjong Line exploded.

What's happening? Colonizers Annie, Bianca and Kate have discovered a new and improved tile game, once known as mahjong but now is a reflection of their individual style and fun. This is a textbook example of #culturalappropriation so happy 2021 everyone. pic.twitter.com/EYNpwmeRFR

Asian Americans across Twitter and Instagram took offense to The Mahjong Line’s products, but it was the company’s marketing strategy that really gassed the fire. The Mahjong Line’s About Us page has since been modified, but its previous copy read:

“On a quest to purchase her first Mahjong set, Kate discovered that the artwork of the traditional tiles, while beautiful, was all the same– and did not reflect the fun that was had when playing with her friends. And nothing came close to mirroring her style or personality.”

The Mahjong Line’s site also stated that it hoped to introduce the game to the “stylish masses,” ironic given its price point of $325 to $425 per set. Its color variants are also exclusive, produced in limited-edition batches so consumers can “rest assured your entire crew won’t have the same tile set.”

The Mahjong Line’s variations, which include “Minimalist,” “Cheeky,” and “Botanical,” are all targeted at hyper-specific consumers. The Minimal sets, says the company, were built for girls who “love a good Eames chair, the smell of coffee shops, abnormally long walks on crisp days and the pulse of NYC.” The Cheeky sets should appeal to girls who “love a wild wallpaper, millennial pink and [their] many sneakers” and who are “equally happy in L.A. or Austin.” None of these descriptions reference Chinese culture or cities.

so a bunch of white ladies decided to redesign mahjong for wHiTe GiRL aEsThEtiC (because traditional Chinese tiles were too boring and didn't match their star signs), and had the caucasity to charge $425 for horribly design sets that make the game HARDER to play ~a thread~ pic.twitter.com/sgbINs1XzM

The company argued that it removed the Chinese characters to make the game easier to learn. “For beginners, our minimal designs are the most similar to the traditional tiles but we made sure to simplify the things that can confuse a new player,” read a statement from The Mahjong Line. “Namely: the unnecessary numbers on flowers, confusing the bird bam for a flower, the monochromatic suits that aren’t distinct enough from each other, etc.”

“Your brain may get jumbled at first read,” read a description of the company’s Field Guides, which function like rule books. “Give it a second attempt and it won’t feel like another language.”

Other sections of the site reference Asian cultures other than Chinese, though it’s unclear whether this was an intentional nod to the game’s popularity across the continent. A blog-like section of the site has since been wiped, but the description still reads, “This is a collection of anecdotes, stories, interviews and a haiku or two.”

TikTok user @DannyPlaysGamez posted a parody video that has amassed 266,000 views. He calls out the company’s appropriation by redesigning tic-tac-toe with references to “white culture” like Starbucks, Target, and Olive Garden.

“[This copy is] centering the White rebrand as stylish luxury and the Chinese original as lacking personality [or] style. Brands do this ALL the time. Put down others to sell themselves,” tweeted Joey Ng, who also penned a piece on LinkedIn explaining why The Mahjong Line is problematic and offensive, from a marketing perspective.

Why the copy on #themahjongline is so problematic

Brands do this ALL the time. Put down others to sell themselves pic.twitter.com/f8PeAX7boy

In addition to the social media backlash, The Mahjong Line’s cultural appropriation has been critiqued by national news outlets like The Cut, USA Today, NBC, and CBS.

On Tuesday night, The Mahjong Line posted an apology from its Instagram account, which stated that the company was launched with “pure intentions” and a love of the “American game of Mahjong.” The post acknowledged a failure to pay proper homage to the game’s heritage and apologized for using words like “refresh.” The Mahjong Line plans to “continue to” conduct conversations with “those who can provide further insight to the game’s traditions and roots.” The brand did not mention whether it had consulted with Chinese Americans before launching its products.

Though the post mentions a desire to continue the conversation, comments are turned off. When we contacted the company for a quote, LaGere explained that threatening messages were being sent and that the comments will be turned back on soon.

In her statement to D, LaGere said that the company takes full responsibility for the cultural erasure of “unintentionally [recreating] an experience shared by many Asian Americans.” The Mahjong Line will take steps to ensure that Mahjong’s rich history and cultural significance are properly represented in its promotion and description of the game, but noted that this would “take some time.”

LaGere added that the company “stands by their products” and is proud to be one of several American companies offering Mahjong sets. She’s right. The Mahjong Line is not the first to create luxury sets targeted at American players, and theirs is hardly the most expensive. Tiffany & Co.’s version, which incorporates the brand’s signature blue, retails for $15,000. Hermés offers a version made from solid wood and printed calfskin for $40,400.

Noted style blogger Tina Craig, who was born in Taiwan and now resides in North Texas, praised both versions on her Instagram stories earlier this week. Despite their prices, she lauded their authenticity, explaining that neither set was “whitewashed.” 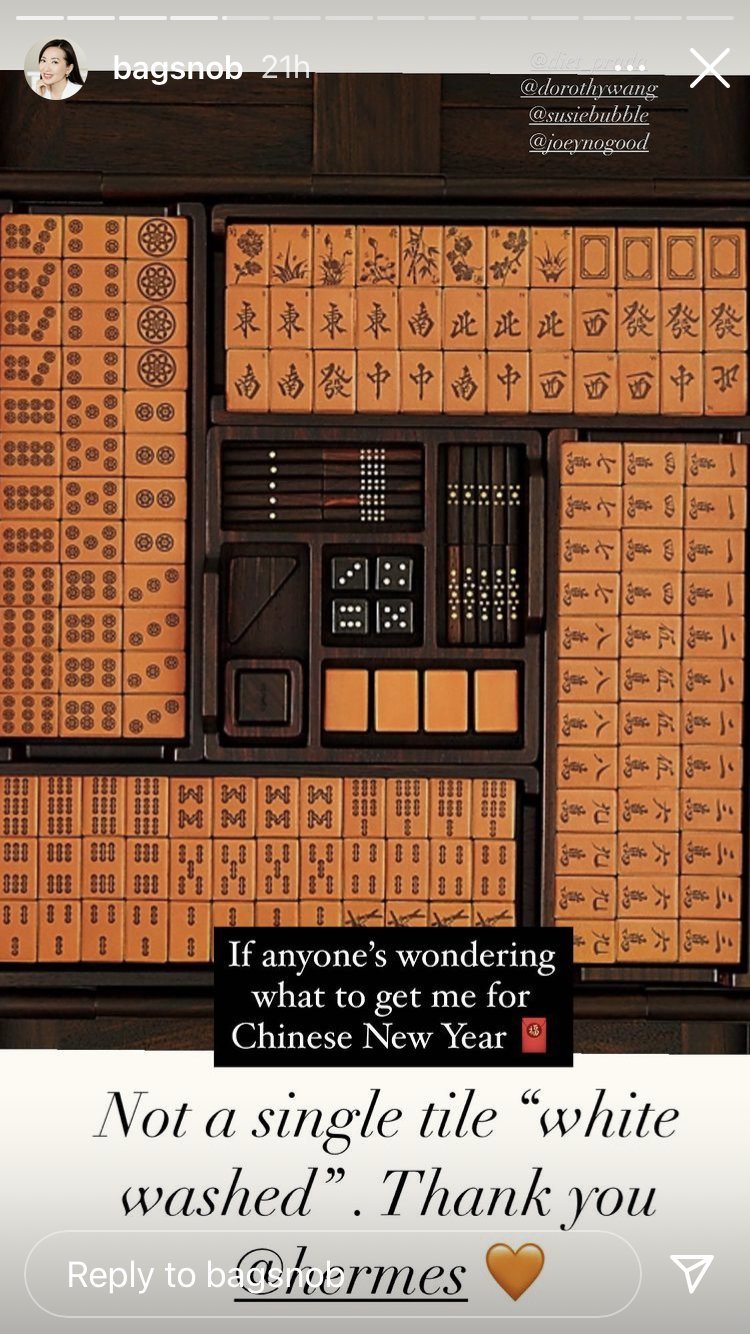 The Mahjong Line also provided quotes from two Mahjong experts. Marlene Stern, an instructor and tournament judge, notes that there is an “endless selection” of unique Mahjong sets on the market and that creating new versions is “great for the growth of the game, especially among younger players.”

Gregg Swain, a Mahjong historian who previously used the pseudonym Kuan Yin online, weighed in as well. She runs the website Mahjong Treasures: Appreciating the Art of Mahjong, a Collector’s Guide, where she educates new players on the evolution of the game and its artwork. Swain tells us that few players today know about the multi-layered cultural significance of the traditional tile symbols. “Versions of the game, and the tile set itself, have been altered to fit into different cultures and regions,” she adds. “I’m a fan of many [modern versions], just as I love the original vintage ones: they all have meanings to their audience.”

Several other companies with ties to The Mahjong Line have posted apologies on their Instagram accounts, including O&H Brand Design, which developed the company’s branding and product designs, and Chris Plavidal, a photographer who shot The Mahjong Line’s product images. (Plavidal also contributes to D Magazine and D Home, which featured the product in print.)

O&H Brand Design “owned and apologized” for its role in creating The Mahjong Line. The company says it is researching ways to learn from the North Texas Asian American community to “better understand, respect, and honor it” in the future.

“Thank you for a more sincere apology compared to that of your former client,” said one commenter to O&H Brand Design. “I look forward to seeing actionable changes… Your executive board presents a predominately white team, having a more diverse company profile would be a great start.”

Meanwhile, Plavidal “humbly apologized” for his ignorance and thanked his followers for calling him out. On Friday, he hosted a two-hour Zoom meeting to continue the conversation. Participants included his followers, local and national photographers, and a professor from the comparative race and ethnic studies department at TCU. The goal, said Plavidal, was to “hear concerns and discuss possible ways to educate [and prevent this] from happening again.” He has donated to relief efforts for Chinese American communities impacted by COVID-19 and joined a local chapter of the Organization of Chinese Americans.

“Too many times have we seen POC cultures… appropriated, and profited without fully understanding or respecting its origin,” said a commenter on Plavidal’s post, “but there’s always room for growth. I only wish the ladies that created the company would also do the same… open their platforms up for comment, dialogue, understand the missteps, and move forward.”

Shop small this holiday season. We've rounded up a few of our favorite local finds to cover everyone on your list.
By D Magazine
Sports