These Lifelong Friends Just Launched a Line of Leather Goods

The story of luxury line Franki Ray begins three years ago, on a front porch around midnight. Stacey George and Sasha Spivey, lifelong best friends, had decided to start a company. They’d already chosen the name Franki Ray (after their fathers) and bought the domain. They wanted to create something; they just needed to decide what, exactly, to create.

“What should our email address be?” Stacey George asked.

“[email protected],” Sasha Spivey suggested. And then, Spivey says, laughing as she tells the story over a glass of white wine, “We just stop and look at each other and we’re like, ‘Holy–we’re going to make briefcases.’”

It was as simple as that. And after three years of incessant yet enjoyable toil, Spivey and George debuted a line of luxury leather briefcases, backpacks, duffel bags, jewelry rolls, and wallets last month. 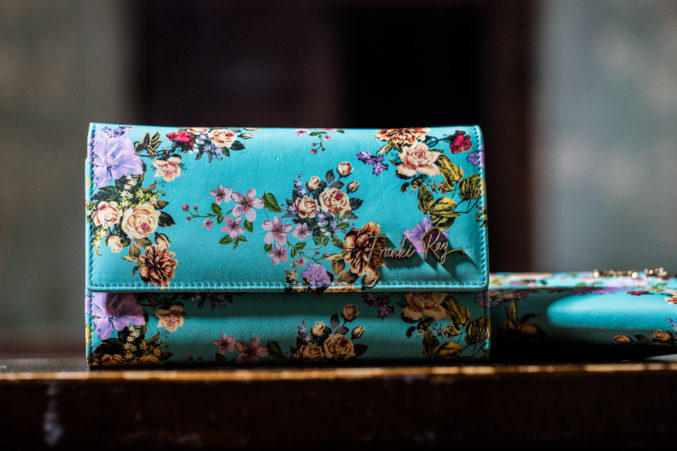 It’s rather a random story, really, unless you know George and Spivey. They met in kindergarten at St. Bernard of Clairvaux Catholic School, in Casa Linda, and graduated best friends from Bishop Lynch. “It’s almost as if our lives merged to where there wasn’t a clear delineation of whose life was whose,” George says. “It’s like, ‘our friends.’ I’m like, ‘I’m coming to get our dog.’”

They parted ways for college. George majored in political science and considered law school. Spivey majored in biomedical sciences and worked at a contract research lab, specializing in skincare; she then transitioned to plastic surgery, including laser resurfacing.

But one day, they just sat down, George recalls. “Somebody said something about a bag [Spivey was] carrying, that I had given her. It was a gift bag, nothing special. [They asked,] ‘Oh, are you guys, like making those?’” George laughs. “I guess it looked homemade. So, we’re like, ‘No, we don’t make these bags. But we could’ve—and it would have been way better.’”

Which led to the brainstorming. “We’re sitting at my house trying to spitball a bunch of ideas to figure out what are we going to make first,” Spivey says..

Neither Spivey nor George specialized in leather and manufacturing, but now they had a “streamlined focus,” as Spivey puts it, “a target plan and idea.” They’d meet once or twice a week and sit at the kitchen table to talk about their plans and the progression. That evolved to daily texting and midnightly chats, atop their day jobs. They hadn’t gone out in the past 10 months, Spivey claims, when they launched; rather, they’d sat at the kitchen table and ironed out their plans.

They used vision boards to create the bouquets and garlands that adorn the interiors of their briefcases, backpacks, and duffel bags. They photoshopped a farrago with one flower they loved, another flower they loved, a picture that inspired them, outlining the optimal color scheme and design aesthetic, then hired a professional artist to create an original computer graphic or hand-drawn image. 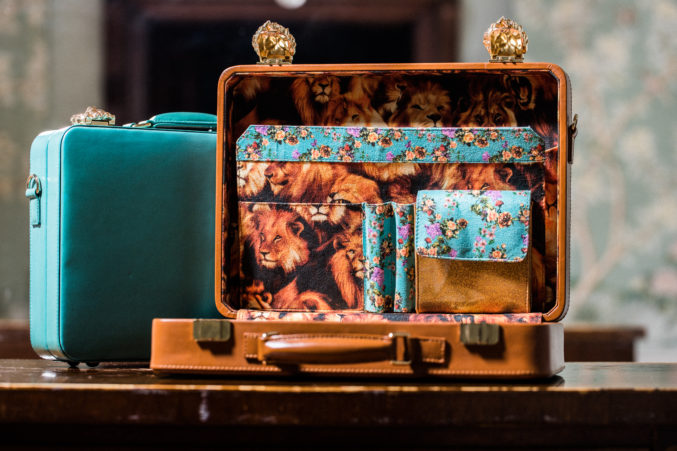 The duo went so far as to create a prototype–a three-dimensional vision board, if you will. They went to the thrift store, purchased “old-school” briefcases, spray-painted them, gutted them, and relined them with vibrant fabrics. The prototypes were used to convey Franki Ray’s aesthetic to the manufacturer they found after 32 rejections. It’s that manufacturer who told them, “We can also do other [products,] if you want.” This is when the friends decided to do a whole collection: briefcases, backpacks, duffel bags, jewelry rolls, and wallets.

Despite the disparity in the shape and size of the products, certain themes crop up over and again. Robin egg blue is a favorite leather color. Roses are a favorite flower. (They’re a nod to Abby, Spivey’s biological – and George’s “adopted” – grandmother, who taught the best friends that femininity is strength). Lions are a favorite animal, appearing on the interior of briefcases and on the exterior of briefcases, jewelry rolls, and backpacks as clasps or keychains. The lion clasp equals seven months of work, the best friends nod gravely.

It’s this commitment that defines Franki Ray. Spivey and George are committed to protecting the environment; hence, all leather is vegetable tanned and the bags’ microsuede interiors are printed with water-based pigments. Durability is equally important to the two, and all bags are made with full-grain leather, which retains the skin’s thick epidermis. Briefcases are made with buffalo leather, which is three times the thickness of cowhide, so that they’re tougher and more resilient. Each bag is hand-polished and rubbed with an emollient to protect against water and increase longevity. Every bag is handmade in India.

“The attention to detail … really [represents] our friendship,” Spivey says. “We’re particular. We like hanging out with each other for very specific reasons and have continued to do so our whole lives because we still enjoy it.”

When asked about how they anticipate the new bags will handle and hold up to daily use, Spivey and George had a good laugh. “Maybe don’t take it hiking in the wilderness when it’s snowing,” George said. Added Spivey, “From general human interaction with something that’s nice, they should last you… I don’t want to say a lifetime, but maybe.”

“Don’t tie it to your trunk like a Just Married can,” she laughed. But the symbolism might be fitting. After all, says Spivey, “Everything we create is a union of us.”

Shop their latest styles at frankiray.com.