It was what I imagine a mild possession might feel like—in the best way possible
December 4, 2019|12:00 pm

Of all the French-related myths out there, I connect with “French women don’t exercise” the most. I first learned about EMS (electric muscle stimulation) workouts from French influencer (naturally) and fashion muse Caroline de Maigret. The idea: condensing the benefits of a 90-minute high-intensity workout into 30 minutes or less with zaps of electricity.

After some research and an episode of The Real Housewives of Dallas, I discovered Ninety20 in Preston Royal.

The Idea
The aim of EMS workouts is to tighten and tone in a shortened period of time. The 20-minute workout achieves roughly 90 minutes of a high-intensity gym workout. As you work, lifting weights or doing squats, the suit is contracting your muscles on and off for four seconds, with a resting period of four seconds in between each contraction.

It’s meant to supplement your already established workout routine. Ninety20 owner Trent Michel told me it’s perfect for speeding up your gym results. It might save you time, but it certainly does not save you effort. 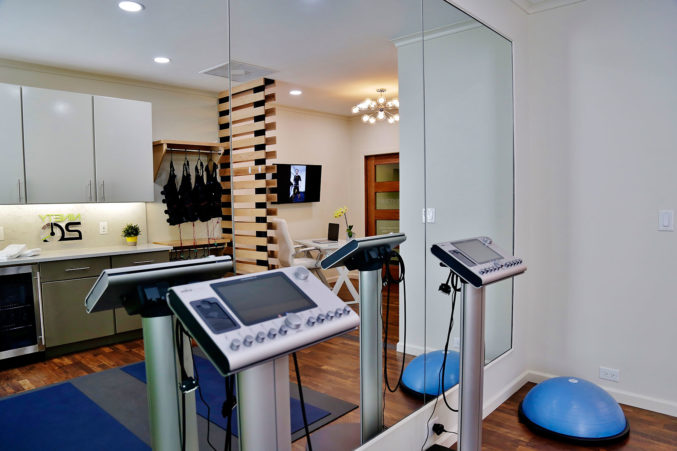 The Workout
Going into the workout, I was expecting some mild currents. Something similar to the pleasant tingling sensation I associate with physical therapy and facials. Reader, it was not. It might be only 20-minutes long, but it is definitely still a workout.

After I suited up in an outfit truly worthy of the Hunger Games, Michel hooked me up to the machine, and gave me two stress balls to squeeze. It certainly wasn’t unpleasant, but it was intense. Every muscle in my body contracted. And I mean really contracted, I’ve tried to see if I could tighten my muscles as intensely as the machine could, and I definitely cannot. The suit was accessing and activating muscles I didn’t even know existed.

It was an alien sensation, and it took a little getting used to the fact that I was no longer fully in charge of my body. It was what I imagine a mild possession might feel like—I mean this in the best way possible. After four seconds of muscle contracting charges pulsating through my body, I was happy for the four-second rest period before the next round of zapping.

The suits have the ability to make two-pound weights feel like 50 pounds each, or even heavier depending on the strength of the current. It was wild how hard I struggled to lift two pounds. I loved it. As I started to get used to the strength of the current, Michel would crank everything up, making it difficult again. I was pretty fatigued after 20 short minutes, and incredibly sore all over for the next three days.

The Space
Unfortunately, Ninety20’s original Preston Royal location was damaged during the tornado in October, so the studio is closed for the time being. But don’t worry, you can still fit in a workout with Michel. He’s currently operating out of a temporary location and plans to reopen the Preston Hollow studio, along with a new location off Lemmon Avenue, early next year.

Verdict
Since the sessions are private, they run a bit steep (around $80 a pop), but Michel is hoping to start offering group classes out of the new location next year. He’s already testing out a brand-new wireless EMS bodysuit. I can definitely see myself going back as I begin ramping up my minimal gym routine in 2020. It was a blast, and who doesn’t love seeing results a little bit sooner?

Four Seasons Dallas is the urban oasis you’ve been waiting for all summer.
By  D Partner Studio
Galleries

Scenes from a recent night out at one of Uptown's newest bars.
Television