With the cold front in full effect, temperatures were rapidly dropping Monday night as I drove from Dallas to Southlake. Somehow, a little bit of wind kept creeping through my car windows and gnawed away at me, no matter how high I turned my heat.

It wasn’t until I parked my car in Southlake Town Square and scurried from the lot into the new glowing Draper James boutique that I felt fully warm. Leave it to a group of southern women to be this Midwesterner’s antidote to the cold.

Inside Reese Witherspoon’s store, Garden & Gun had set up shop for a signing of their most recent book, “Southern Women.” The Charleston-based magazine had compiled more than 100 stories of innovators, artists, and icons in an effort to banish any outdated ideas about southern women. Among the women included in the book are Dallas’ own Lela Rose, Mi Golondrina founder Cristina Lynch, and Mary Ella Gabler, who was in attendance to sign books.

Gabler founded Peacock Alley in 1973, and when I first walked into Draper James, the company’s marketing maven, Katherine Nicholson, scooped me up and welcomed me in as if I were one of her own. My mom lives 500 miles away in Kansas City, but with Nicholson’s hospitality, she didn’t feel so far.

After a little shopping, mingling, and sipping bubbly, we gathered around Gabler and Garden & Gun’s Style Director, Haskell Harris, to hear their take on the book. (“Southern Women” was written by the editors of Garden & Gun, Harris included.) While Gabler is originally from the East Coast, she was living in New York when she founded her company, and because of her connections at Neiman Marcus, she moved her company here, something she believes was instrumental in her success. 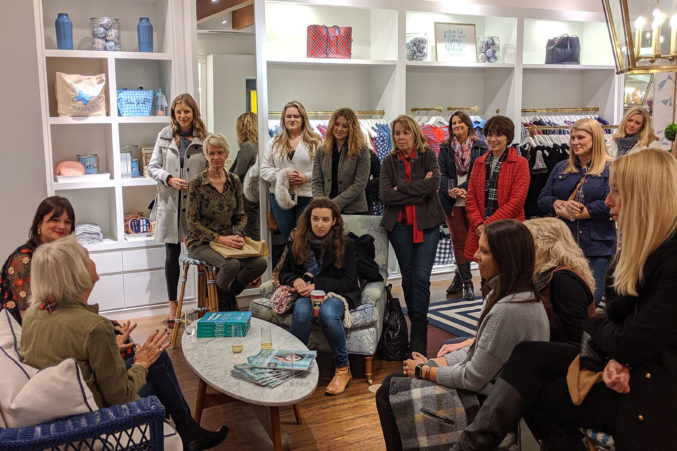 There’s me in the middle, with blonde curly hair and admiration.

“I just felt there was such a can-do attitude down here when I started. I didn’t experience the negative ‘you’re a woman, why are you doing this?’,” Gabler says. “There’s just a graciousness about the South. I always found it very welcoming and such a plus to live here.”

And though Gabler says that she didn’t encounter gender discrimination, her journey wasn’t always easy. “One of the things that I learned on my trip here with Mary Ella and her team is just the tenacity, grit, and perseverance that she has in making her business successful over the years, in spite of a lot of obstacles,” Harris says. “And she might not have grown up in the South, but she is an honorary southerner, because I don’t think you’ll meet a southern woman who does not have the same grit and perseverance to get through just about anything.”

Ignited by the night, I was no longer searching for heat as I drove back to my newly adopted Dallas.

Sale of the Week: Ella Bleu