Two years ago, Dr. Lyndsey Harper, an OB/GYN, began noticing a trend at work. Several times a day, and often through tears, her patients were expressing the same concern: they didn’t feel like having sex with their partner, ever. Harper assured each woman they were far from alone, but it was difficult to convince them. “The problem is, physicians don’t talk about it. People in general don’t talk about it because they’re embarrassed. It just snowballs, the sexual shame and isolation that we feel as humans, and then nothing ever gets done about it.” Harper says. “I was like, this is absolutely ridiculous.”

Another problem: most doctors, including Harper, are never taught how to speak about women’s sexual health. “Here I am, a board-certified OB/GYN, and I have no idea what to do with these people,” Harper says. She joined a medical society, ISSWSH, which focuses on communication around women’s sexual function and experience, and was blown away.

But after four lecture-filled days at the organization’s fall conference, she realized something disheartening. “I’m going to know all this in my one little doctor brain, but I only see 30 people a day at most and 38 percent of women have low sexual desire. How does this map work out? It doesn’t,” Harper says.

So she turned to tech in the hopes of reaching more people. She pitched her husband, the founder of Dallas-based technology firm Dialexa, and his business partner, and then the entire company on building her app, Rosy. As the launch date came closer, Harper, who was still working in private practice, decided to become a full-time tech entrepreneur. “I just felt like, if I don’t do this, I’m not sure who is going to,” Harper says. 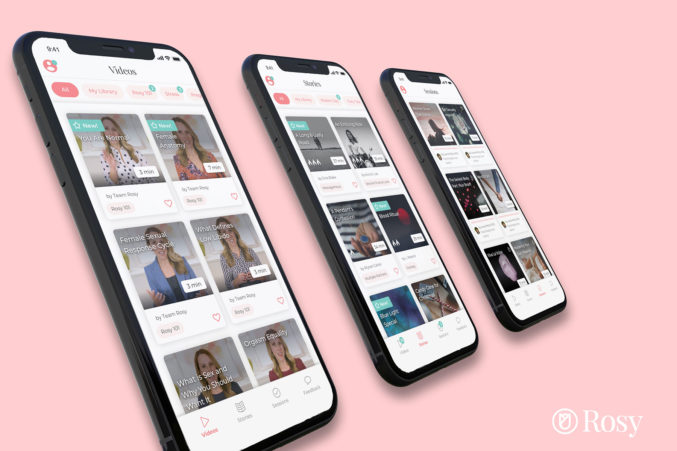 The videos currently only feature Harper or Mintz, but the goal is to eventually include not only more OB/GYNs and therapists, but sex educators, physical therapists, and anyone who has a voice in the space of women’s sexual health. “We’re very focused on being expert led and expert curated,” Harper says. “To create a place where women can come and get answers and know that they’re evidenced-based and legitimate.”

On the other side of things, Rosy could be as useful to physicians as it is patients. Doctors who feel limited in their knowledge of women’s sexual health (just as Harper was only a couple of years ago) should feel comfortable directing patients to the app.

The young company is in its first seed rounds and hoping to raise $1 million in funding. So far, it’s been a positive experience. “People are naturally curious about this stuff,” Harpers says of pitching to both female and male investors. “So it actually starts more conversations, which has always been my No. 1 motivator. Just to start more conversations.”