It’s unclear when the testimonial looks of Bravo’s “Real Housewives” franchise became such a thing. When exactly did they go from a useful narrative device to a beauty moment that could generate as many talking points as the actual storylines? Maybe it was when Erika Girardi went hardcore Stepford Wives in season six of “The Real Housewives of Beverly Hills” (she was making a point), a move that paved the way for castmate Dorit Kemsley’s startling but memorable “CHA-NEL” ensemble this year.

And while not every franchise can match the over-the-top styling of the Los Angeles-area cast, “The Real Housewives of Dallas” have been slowly ramping up their sartorial game, bringing more glamour (and taking more risks) with every new season.

Before season four premiers tomorrow night, we spoke with Daniel Blaylock (aka @blay.locks), the man behind Stephanie Hollman’s hair and makeup, about working with the reality star, creating wow moments, and his “Dallifornia” aesthetic.

How did you get connected with Stephanie?
I lived in Los Angeles for almost 10 years. I worked with Candice Cameron Bure on “Full House” for almost eight of those years. Her PR company would feed me leads for new clients because they trusted me. They knew I was back and forth from LA to Dallas, so when they got Stephanie as a client after season one [of “Real Housewives of Dallas”] they were like, we would love for you to make a relationship with her.

So I met her, and we fell in love. Cary Deuber used the same PR company and kind of followed suit. Once they found out I was moving back to Dallas they were both like, okay season three, this is happening.

Stephanie and I are both from Oklahoma. I call her my Oklahomie. We have very similar backgrounds: just a very kind, humble, and simple life. Also, she wears my work really well. Like, her face is my gift. Honestly.

What is it like working on looks with her for “Real Housewives?”
She trusts me to push her out of the box. I know what she likes and what makes her feel comfortable, so I can use those things to be like, okay, we’re going to push the envelope with this look. She’s 100 percent down every time.

[The testimonials] are a dream come true to be honest. She’ll send me a dress, and then I’m able to create a look based on the dress. I want it to be a full spectrum of wow moments throughout the season. We’ll go from A to Z then back to A with three completely different looks and characters.

Last year, we started out with this over-the-top, curly country star look. I didn’t want her to look like she’d just gotten her hair and makeup done. I wanted her to look like a star that had just come off a magazine shoot or a red carpet, like an Erika Jayne. I’m also super inspired by Dorit [Kemsley]. Justine Marjan is her hair stylist and she’s such an inspiration to me. 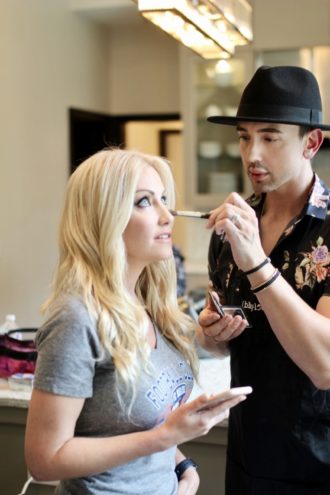 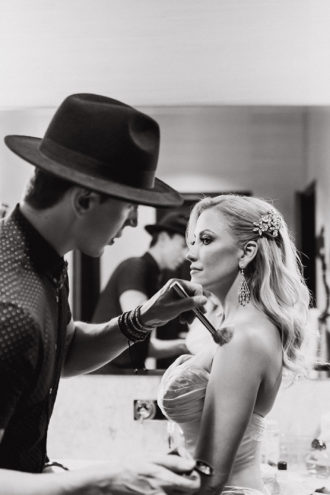 Stephanie’s first testimonial look has been released, can you talk about your vision for that one?
It’s my take on a modern Marilyn Monroe. It’s like 90 percent extensions. I braided down her real hair and then put shorter extensions over them, so it looks like she got a pretty drastic haircut.

That first look is the boldest. She’s the only one in black, so the moment you see her on camera for the first time you’re like, What? Truly, as an artist, that’s what I live for. It’s so much fun.

Your signature aesthetic is “Dallifornia.” What does that look like?
Marrying the signature Dallas glam with the effortlessness of California. It’s really just blending the two cultures together.

When you’re not working with Stephanie, where can Dallas find you?
I just opened up my own hair and makeup design lounge inside the Enlighten building. I’m attached to their luxury boutique, so I have this really cool “Dallifornia” oasis.

This interview has been edited and condensed for clarity.