I’m a 25-year-old woman, and I’ve never had a facial. Is this unusual? I never thought so. Facials seemed like a luxury, or a pre-event indulgence. Whenever I’d reveal my inexperience to friends or coworkers, they were incredulous, as though I declared I’d never gotten a haircut. Am I, in fact, abnormal? Or do I just have very high-class friends and coworkers? I was unsure. Admittedly, I’m a beauty minimalist. My makeup routine consists of lotion and mascara… that’s about it.

Our style editor, Caitlin Clark, whose role requires her to be well-versed in local beauty and skincare, was bemused by my low-key approach to skincare, and decided I should experience Natura Bissé’s pure air facial (a futuristic treatment inside an igloo-esque bubble) during the Dallas leg of its international tour. “This will ruin all other facials for you going forward,” she warned me. Last Friday, I headed to Neiman Marcus NorthPark to see if she was right. 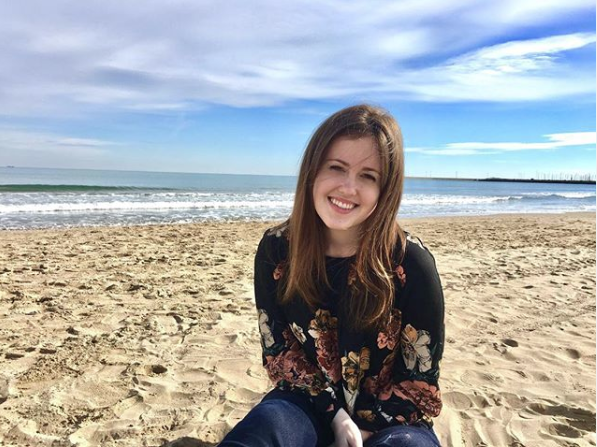 Expecting the bubble to be on display for shoppers to ogle, I roamed the beauty department, but it was nowhere to be found. A kind salesman saw me wandering aimlessly for a good 15 minutes, took pity on me, and led me to the Natura Bissé counter where Gretchen, a brand representative, greeted me graciously. As we walked up to the secluded upstairs room housing the bubble, she asked about my current skincare routine. Reluctant to admit my face wash of choice is most often just water, I mentioned that I occasionally double-cleanse with oil (because that’s what skincare pros are doing these days, right?). When she asked for a brand, I racked my brain for any reputable skincare line, but eventually blurted out the truth: Burt’s Bees. (Are you cringing yet?)

She laughed kindly and said, “Well, you’re in for a treat, then.” She entered a code in a tiny keypad on a white door and swung it open. Inside was a light, bright room, with neutral gauzy curtains blocking off a changing space, and the infamous bubble standing resolute in the middle. When I was handed a robe, I was glad I had frantically texted a coworker that morning to ask what to wear underneath it. Do I keep my full outfit on? Do I keep anything on? She, too, had laughed kindly (I sensed a trend) and explained that facials often extend down to the neck and décolletage, so wearing a shirt wouldn’t make sense.

I stepped out in my heavenly soft robe-and-slippers ensemble and Gretchen motioned toward the bubble. “Sierra, our aesthetician, is inside waiting for you. I’ll be back in an hour,” she said. (The thought of Sierra huddling inside the bubble, hearing this full conversation, amused me.) 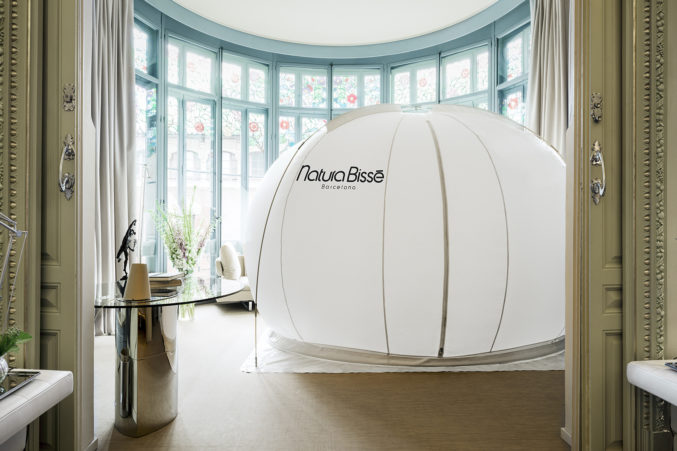 The bubble’s ceiling let in just enough light: think a tent in the early morning during a camping trip. It was roomy—I could stand and walk around comfortably. A sound machine mimicked crashing waves, and essential oils filled the space with an herbal scent. I introduced myself to Sierra and shook her hand, which, in retrospect, I don’t think is within the realm of normal client-aesthetician interaction. I was guided into a cocoon of towels and blankets on the treatment table.

Initially, I was skeptical of the “99.9% pure air” in the bubble. The concept of clean air during a facial makes sense—you wouldn’t want to perform treatments outside on a smoggy Hong Kong morning, for example–but was pure air really necessary? Was the normal air in Neiman Marcus unfit for breathing? I soon was pleasantly surprised, though. I have horrific allergies. I sniffle and cough every minute of every day. In the bubble, though, I felt myself breathing easily, and shallowly, since I was taking in half as much air as I normally do. Fair enough, Natura Bissé. I suppose you’re onto something.

Sierra, to my surprise, began by adjusting my body, firmly pushing and rolling her hands against my side, back, and neck, then performed a ‘cranial alignment’ (which felt like a head massage). Sierra removed my mascara and kneaded an aromatic, thick cleanser into my face and neck with precision. Such precision, in fact, that I at first thought she was using a jade roller or some sort of tool. Nope—just magical hands.

At this point, I have to compliment Sierra’s voice. She may have been a hypnotist in a previous life. Had she instructed me to jump off a bridge after my treatment, there’s a strong chance I would have obliged. I had assumed the situation would be more akin to a dentist visit, where they attempt to chat while their hands are in your mouth. Sierra, though, used a lulling, soothing tone, just removed enough so that I didn’t feel like I had to respond to her as she described each treatment.

Next was a glycolic peel to remove dead skin. Sierra warned me that it would sting, but to let her know if it became painful. It did indeed sting—I imagine this is what microneedling would feel like. It was bearable. That was followed by a plethora of creamy toners, serums, and moisturizers, all sealed in with a thick mask. I wish I could be more specific, but I may or may not have dozed off. It was a level of relaxation I’m not sure I’ve ever reached before.

Suddenly, it was time for me and Sierra to part ways. I stepped out of the bubble to find Gretchen waiting for me, LaCroix in hand. I got dressed drowsily and attempted to keep my eyes open. Sierra, unbeknownst to me, had been customizing my treatment for my skin concerns (dryness) and marking down each product used for me to consult later. Gretchen walked me through her selections back at the Natura Bissé counter downstairs. I nodded along as she ran through each moisturizer and serum, taking mental notes. Before I left, she reminded me that Natura Bissé performs “normal” (read: non-bubble) facials year-round, seven days a week. “Don’t wait a year before your next one!” she said.

Back at the office, I pestered my cubicle-mates for their opinions. Did I look different? Was I glowy? They claimed I was, though I wasn’t fully convinced. My skin looked more or less the same, albeit cleaner and more hydrated. The only noticeable difference? I looked happier. Relaxed. Rested. I can’t remember the last time I took an hour to indulge and treat myself, and the positive results were apparent in my smile. Perhaps my friends really are on to something.

So, would I recommend the bubble facial? Absolutely, if you want to take the plunge and make the investment. (It will surely come to town again.) More than anything, though, I recommend that you take some time for yourself this week—facial or otherwise.

ShopTalk Friday Giveaway (This One Will Blow You Away)