Highland Park Village’s Mi Cocina may be closed for the next few weeks, but the somewhat clandestine (by now, the secret’s out) Monkey Bar just debuted triple the space, a fresh menu, and a lighter look for the 21-and-ups still looking to meet at MiCo this summer.

The update was executed by Droese Raney, the Dallas architecture and design firm behind Forty Five Ten, Neighborhood Goods, and Mi Cocina’s current facelift. For the third-floor Monkey Bar, the team expanded the interior and created an outdoor terrace, using natural materials and bringing in as much light as possible. “The most beautiful aspect of Monkey Bar has always been the feeling that you’re in the trees,” says Lance Raney, a principal at Droese Raney. “What we wanted to do was allow the interior to open up and present itself to the terrace, offering new opportunities for glimpses of the Village.” 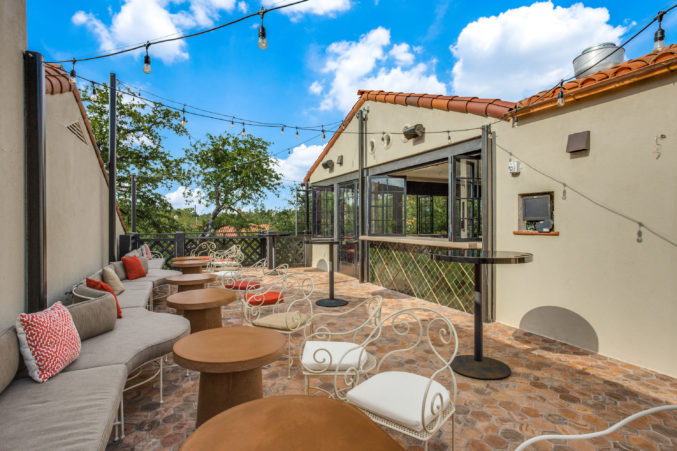 Droese Raney also handled the construction of Highland Park Village’s Park House, giving them experience in handling the often tricky task of reimagining history (the shopping center was designated a National Historic Landmark in 2000). “That’s certainly the challenge and a rewarding aspect of this type of work,” says Raney. “We want to be respectful of what we’re given and hopefully create something that feels like it’s always been there.”

In addition to expanding Monkey Bar’s square footage, the seating, cocktail tables, and sconces were all updated, along with a new brass-trimmed bar face and shelving. Mexican tiles from the 1960s are used in the bathroom, wooden dining chairs were crafted from naturally fallen trees by Oak Cliff’s Sean Springer, custom upholstery was fabricated by Cuellar, and cocktail tables were hand formed by Fife Metal Works. “In all of Droese Raney’s work, we try to push an honesty of materials,” says Raney. “The upholstery, booths, and banquettes were all fabricated locally, and mostly by Hispanic artisans.” 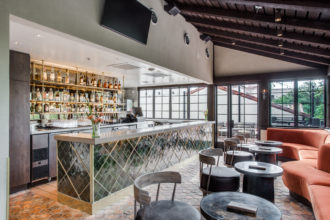 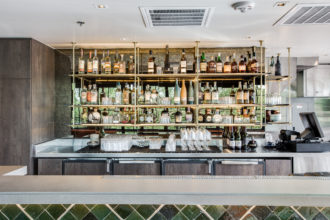 And while the monkey portraits no longer adorn the walls, the animal’s presence isn’t entirely gone. “It’s going to be a bit more subliminal. I think there’s going to be a backtrack in in the courtyard area where you’ll hear birds and monkey sounds here and there,” says Raney. “So the monkeys will live on.”