On a Saturday morning in West Dallas, Fernando Chavez drives to various supermarkets to pick up hundreds of loaves of bread. Sourdough, wheat, rye—the type doesn’t matter to Chavez as long as he has enough for the coming week. He grips the steering wheel of a large white delivery van as he swerves around potholes and cracked pavement. He wears cargo shorts, athletic shoes, and a camo-covered Ezekiel Elliot jersey.

Chavez is an employee at Hunger Busters, a nonprofit organization founded by EatZi’s Phil Romano in 2007 that delivers meals to food-insecure children in the Dallas Independent School District. Even though he has Saturdays off, he typically spends them picking up bread for the upcoming week’s meals. Without Chavez and his fellow volunteers, children at eight DISD elementary and middle schools could go without a third meal of the day. Many of the children at these schools are considered food insecure, which, according to For A Better Texas, refers to households without access to enough nutritious food to support a healthy life. “Just getting that little bit of nourishment goes a long way,” Chavez says. He’s right. According to the Center for American Progress’s titled “Hunger in America” study, children who live in hungry and food insecure households get sick more frequently, miss school more often, and perform worse on tests. In 2017, Hunger Busters provided more than 350,000 meals to 11 DISD schools and six after-school programs.

On Wednesday, Chavez pulls his delivery truck into the parking lot of a small, shed-like building in the Trinity Groves area. Inside, mismatched chairs line the walls and low hanging industrial lights loom from the slanted metal ceiling, illuminating a hand-painted mural of Hungers Busters’ slogan: “Feeding Kids, Fueling Futures.” A large wooden desk sits in the center of the room where Jason Garza, Hunger Busters’ production manager, greets and signs volunteers.

A team of 11 volunteers shuffles around in t-shirts, jeans, and athletic shoes, waiting to get started. One volunteer, Victor Lopez, is a first-timer, and admits to being a bit nervous. Garza stands up and addresses the volunteers. “You will be making 978 sandwiches today,” he says. “A lot of these kids, when they come home from school at 2:55pm, this will be their dinner.”  Garza began with Hunger Busters last July. Like Chavez, he says working at Hunger Busters is a major commitment, but he doesn’t mind the long hours. “If kids in school aren’t paying attention and they’re not eating right, then it’s going to affect their studies,” says Garza. The volunteers nod along to Garza’s words, eager to lend a helping hand.

Garza walks over to a set of white double doors, swinging them open to reveal a large kitchen lined with chrome tables, clusters of boxes filled with apples and bread, and Chavez greeting the new faces. Chavez flips on the radio and turns it up when Journey’s “Don’t Stop Believing” comes on. Today, volunteers will be using 178 loaves of Chavez’s bread to make the meals. “Note to self: do not do this job on an empty stomach,” he says with a laugh. The volunteers begin setting the sandwiches on a conveyor belt where a machine snatches each one up in its own plastic bag. In one minute, 80 sandwiches sit neatly bagged at the far end of the conveyor belt. After two hours, the volunteers have successfully made nearly one thousand meals (sandwiches are paired with an apple and a pack of cookies). Lopez is proud of the work he has completed. “That was so much fun,” he says. “Can you get a picture of me?” 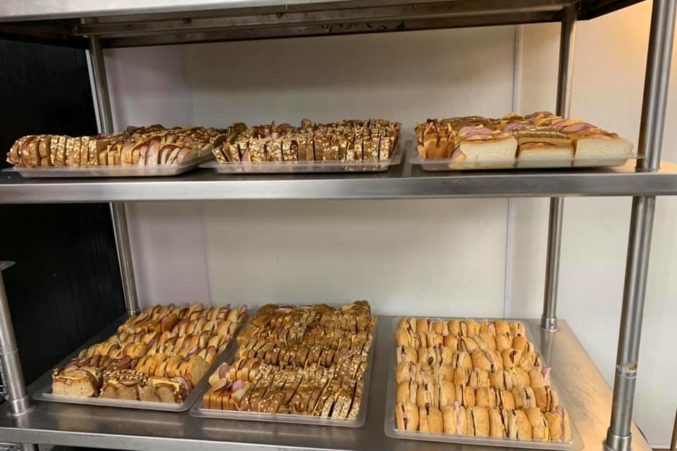 The volunteers are done, but Chavez’s job is far from complete. For the rest of the afternoon, he’ll deliver freshly made meals to eight local schools. First, Chavez heads to Lorenzo De Zavala Elementary School, a school in a low-income area of West Dallas with a primarily Hispanic student body—94 percent of the student body is eligible for free or discounted lunch at school. After pulling into his designated parking spot, Chavez unloads four of the black bags into an extendable cart, and pushes it through hallways filled with blue miniature lockers and the sounds of children singing “Baby Shark.” “The kids are so cool, they like to give me high fives and little fist bumps and stuff,” he says. “It’s fun to put a smile on their face.” After he unloads the meals, Chavez climbs into the front seat and begins heading towards his second delivery stop of the day, Maria Moreno Elementary School. Afterward, he will make six more stops. The whole delivery route takes about two hours.

On his way back to Hunger Busters’ Trinity Groves headquarters, he turns up the radio and nods his head to the music before slow moving traffic interrupts his flow. “This is the worst part of my job,” he says. As the cars slowly creep forward, Chavez notices a homeless man on the side of the road. He holds a sign that reads, “anything helps, God bless.” Chavez rolls down his window and beckons the man over, handing him a water bottle from his cup holder. “There are some homeless veterans around the bridges,” he says. “If I have some extra food with me, or if I have an extra water, I will always give it to them. Seeing someone out there who doesn’t have it as good as you—sometimes it’s nice to pull over and give them a meal or talk for a minute.”

By late afternoon, Chavez finally returns to the Hunger Busters headquarters to unload the now-empty bags and look forward to being home with his wife and dog. “By the time I finish, I usually go back to the kitchen and make sure it’s clean and ready for the next day,” he says. “But most importantly, I have to make sure I have enough bread.”

In Quest to Defend His Kid, an ESD Parent Reaches for State Supreme Court