A couple years ago, I sat down with Mexican-born, Oak Lawn-based, Yale-educated, former bankruptcy lawyer Regina Merson so she could talk me through each item of her makeup line, Reina Rebelde, the first brand made specifically for Latinas. The stories behind the different names were fascinating. For an out-there red lipstick: Brava (translation: bitch be angry). For an ebony eyeliner wand: Zapatista, the name of the south Mexican female rebels who fight for indigenous rights and rock eye makeup. And so on. You can find the notes from our conversation in the gallery here. 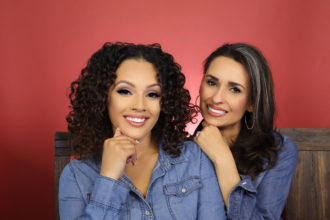 During that meeting it became clear that Merson, with her product finally finished, had two new objectives to tackle: one, she was trying to figure out how to sell her merch, other than offering it on her own website, and, like every cosmetic brand out there, she needed to connect with key influencers. Well, as of last April, Target stores came through to solve her first problem. And yesterday, Merson announced the fruit of her second labor: she has collaborated with the Puerto Rican-American beauty vlogger Viva Glam Kay—1.4 million Instagram followers; almost half a million YouTube subscribers; single mama; real world name, Kay-Lani Martinez—on two new products.

With that, Merson has made a single mom-slash-makeup artist’s dreams come true, expanded her reach in the world of young beauty obsessives, added Puerto Rican flavor to her Latina line, found a way to benefit those still suffering from Hurricane Maria’s destruction, and given us the most striking cobalt eye makeup I have ever seen. The mujer inteligente strikes again, and she’s done it with winged liner Ariana would be jealous of.

Backstage Beauty: Behind the Scenes of Our Favorite Fashion Shows