That was without a doubt the hardest loss of the season to swallow for the Cowboys. A 14-point fourth-quarter lead evaporated in Green Bay on Sunday, and despite Dallas getting the ball to start overtime, the Packers came out victorious.

The defensive collapse requires further examination. After all, the Cowboys have one of the best defenses in the NFL this year. A 28-14 lead seems like a slam dunk when you’ve got the best pass defense in the league. And yet here we are pontificating on what went wrong in a heartbreaking overtime loss.

Dallas failed to slow down Aaron Jones even the slightest bit—a not unexpected result, given that run defense has been a weak spot all season. But there’s more to this loss than just the Packers’ ground game. In fact, one number is quite revealing when it comes to telling the story of this game: 3.

That’s the number of touchdown passes the Cowboys surrendered to Aaron Rodgers and the Packers. It marked the first time Dallas has allowed more than two touchdowns through the air all season. Going even further back, this defense hadn’t surrendered three or more passing touchdowns since Week 1 of last season. That’s a 25-game streak we just saw broken.

Here’s the good news: the pass defense is not broken. Dallas still has one of the best secondaries in the NFL and the best pass rush in the league. It took a confluence of events to create a situation that allowed the Packers to have success through the air, and it started before the game even began. Because linebacker Anthony Barr was sidelined with an injury, defensive coordinator Dan Quinn was forced to adjust Micah Parsons’ role. Parsons finished with only nine pass-rushing snaps—a far cry from the 29 he averaged through the first eight games of the season. Combine that with the fact that Rodgers dropped back to pass only 23 times, and the result was the lowest amount of production from the Cowboys’ elite defensive unit in a game this season. 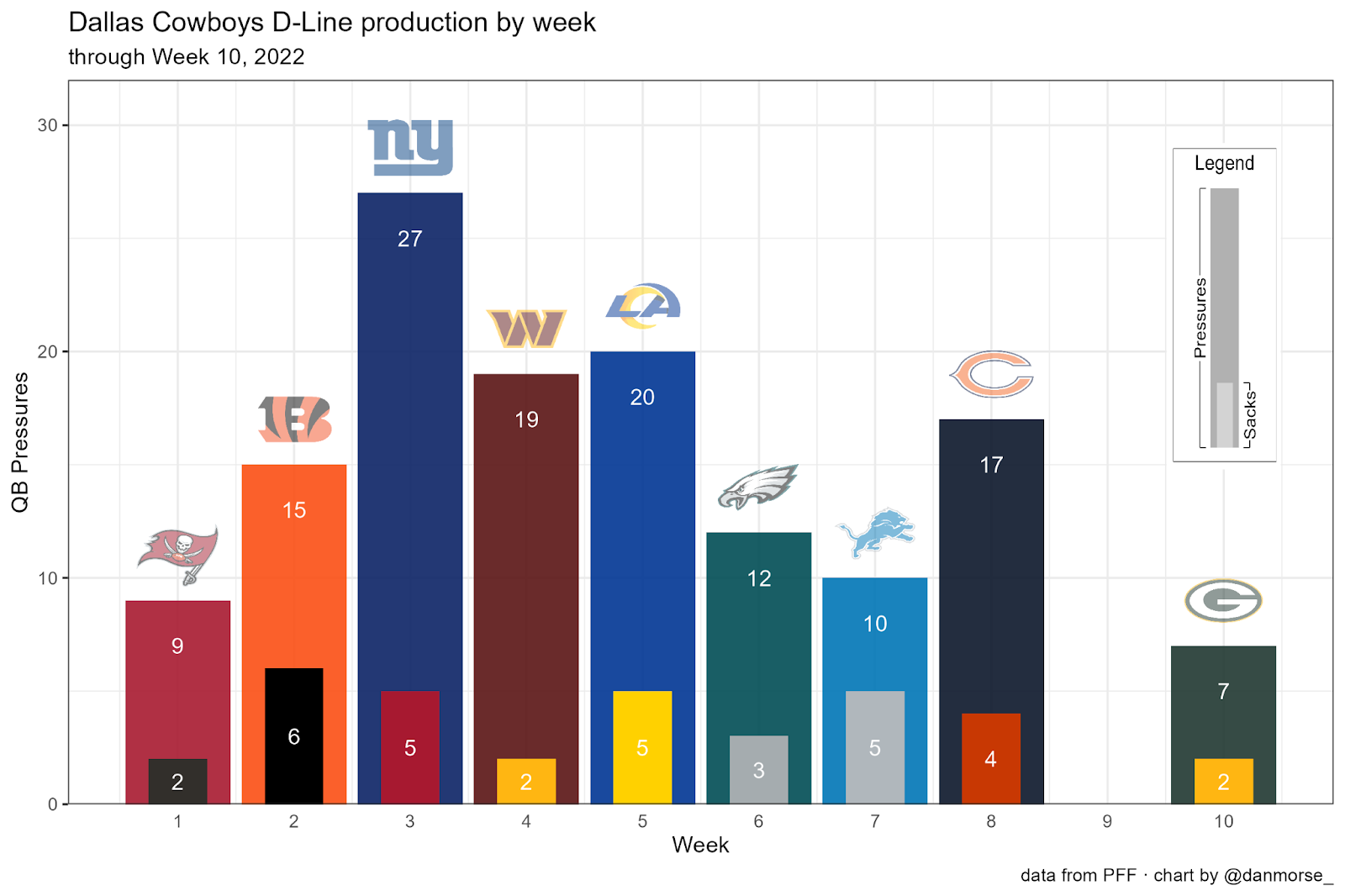 The defensive front just didn’t get an opportunity to shine. The Cowboys did sack Rodgers twice, both on third downs. But they failed to get through on early downs, which can be huge in keeping an offense on uneven footing and away from manageable third downs. Getting to the quarterback on early downs has been a strong suit for the Cowboys this season, but it wasn’t on Sunday.

Again, though, it’s tough to put too much blame on the defensive linemen for failing to get to Rodgers on early downs. That’s because they rarely had the opportunity. The Packers ran the ball 34 times on first and second down, compared to just 14 pass plays. Simply put, they ran it down the Cowboys’ throat. Jones averaged 5.8 yards per carry and more than 6 yards on the early downs. That undoubtedly puts more pressure on the players in the secondary to key in on the rushing attack, which in turn can make them more vulnerable to the explosive passing play. That’s what we saw Sunday. 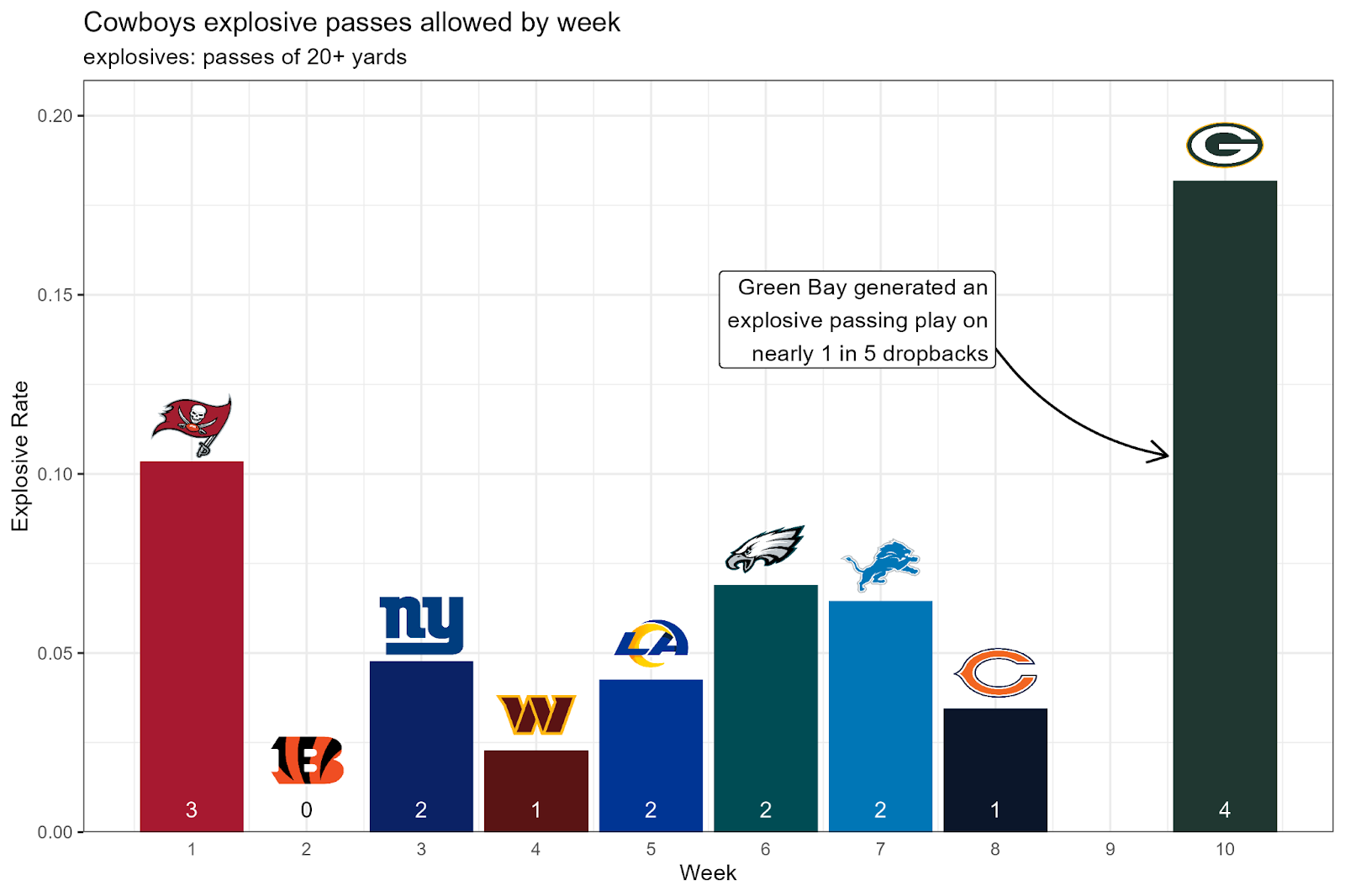 Despite facing only 23 dropbacks, Dallas gave up more pass plays of 20-plus yards than it had allowed in any other game this year. (It didn’t help that cornerback Anthony Brown was sidelined in the second quarter with a concussion.) Three of those plays led directly to points for the Packers: two long touchdowns to Christian Watson and a big gain on a third-and-one pass in overtime that put them in field goal range for the win.

There’s also evidence of how the Packers’ rushing attack affected their passing game in the play-action numbers. The Cowboys have been pretty solid against play-action passing this season. Heading into Week 10, they ranked eighth in yards per attempt allowed, 12th in passer rating allowed, and first in sacks when their opponents ran a play-action fake, per Pro Football Focus. But with Jones running often and quite successfully, the play-action defense took a hit. Rodgers completed nine of his 11 play-action attempts for 148 yards and two touchdowns. He had a perfect 158.3 passer rating on those passes.

The good news for the Cowboys is this game is over and behind them. It hurts to miss a chance to gain a game on the Eagles after seeing them lose to the Commanders on Monday Night Football, but it happens. The bad news is that Dallas now moves on to Minnesota.

Considering the defense looked bad going up against Green Bay, that doesn’t bode well for the coming week. The Vikings have an explosive back in Dalvin Cook, and Kirk Cousins will be throwing to Justin Jefferson, who might be the best receiver in the NFL. And say what you will about him, but Cousins has had a better 2022 than Rodgers.

Minnesota has always loved to pound the rock, so expect Cook to be a focal point of the offense. Cousins will throw it when he needs to, and he can make plays. All told, the Vikings not only have the personnel to do what the Packers just did to the Cowboys, but also to do it even better. The blueprint to beat this defense is out there, so Quinn had better pull out every trick in his bag. Otherwise, we very well could see another big day on the ground punctuated by success through the air for a Cowboys opponent.

View Profile
Dan covers the Cowboys for StrongSide. He is a Pacific Northwest native & self-described nerd who has been covering the…
Dallas Cowboys

The team once accidentally bid $275K for the URL.
By Tim Rogers
Football

It was like last week ... except the total opposite.
By Mike Piellucci
D Magazine Directories