And how seriously we should take them six games into the season.
By Iztok Franko | November 2, 2021|11:56 am
Advertisement

If you watched the first six games of Mavericks basketball, you are probably as confused as I am. I feel like I’ve been sent back to the ‘90s with a time machine, and I’m watching the Pat Riley’s Knicks all over again. Your Dallas Mavericks, with the same group of players who set the record for historically best offense only two years ago, are averaging less than 100 points per game. It’s hard to believe that a Luka Doncic-led team could be the worst shooting team in the NBA and the 27th-ranked offense, but here we are. In an attempt to clean up the game, NBA  commissioner Adam Silver implemented new rules to prevent foul-hunting. But it seems that Silver forgot to tell NBA stars like Doncic that hand-checking will be reinstated as well, and as a result, we’ve seen a league regression on offense and a lot of bad shooting.

So that’s the backdrop as Jason Kidd tries to keep this team afloat in the standings and instill a new identity despite getting just two and a half games out of Kristaps Porzingis thus far. Yet, amid all the early-season chaos, Dallas is 4-2 and currently sitting in the third place in the Western Conference. The Mavericks gutted out those four wins against average competition, something that they struggled to do last season. On the flip side, the two losses against upper-echelon teams—Atlanta and Denver—were so bad that the Mavericks currently rank 25th in the league in point differential.

With everything going on, it’s difficult to figure out this team’s identity. The first six games brought more questions than answers, some of which are more notable than others. Here’s what I’ve seen so far, along with how seriously I take each development.

The Offense Is Struggling 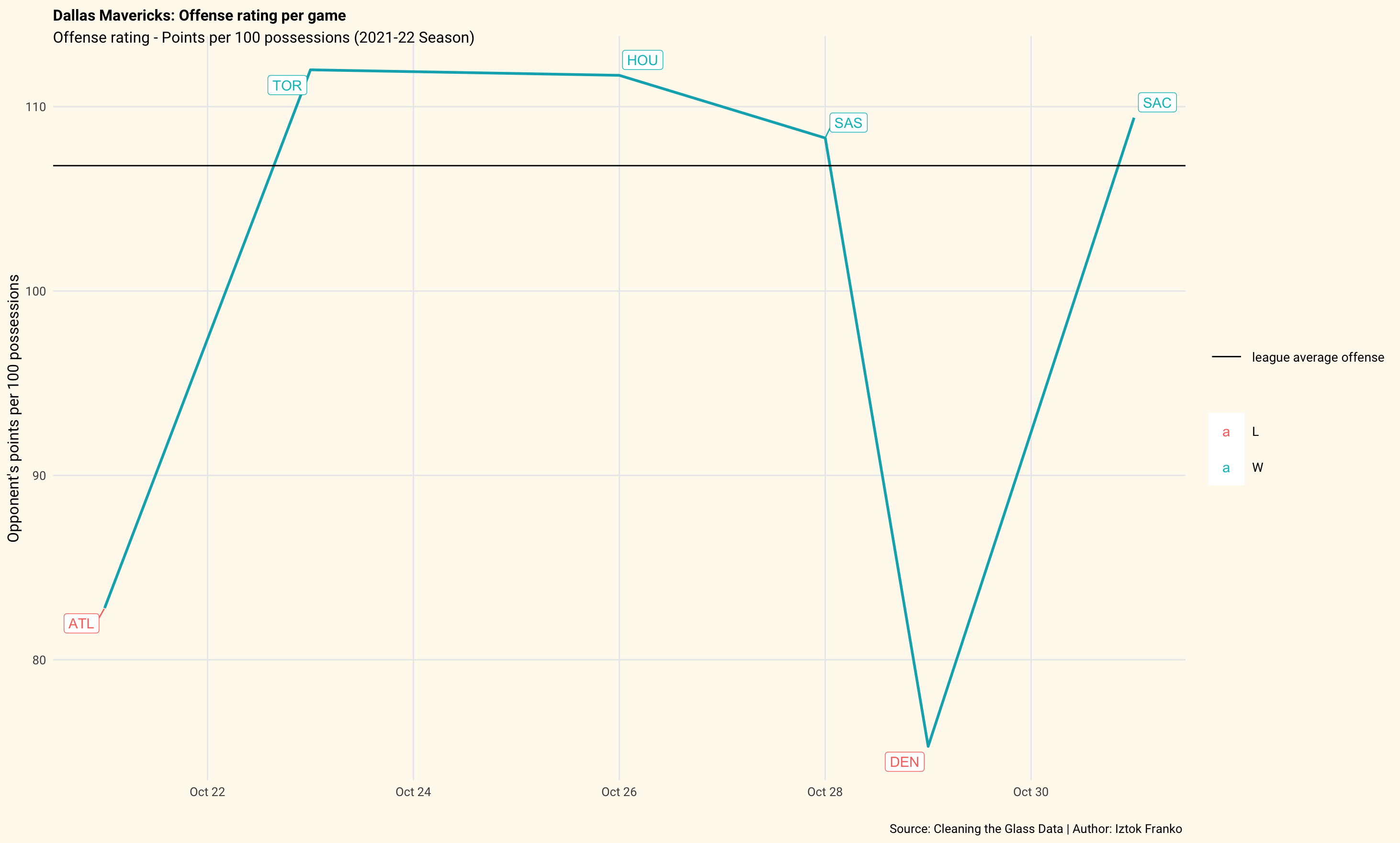 Alarm bells should be going off when a Luka Doncic-led offense ranks 27th in the league. That’s especially true when the Mavericks hold the current mark for the lowest-scoring game this season with 75 points scored against the Nuggets. So, why only moderate concern?

It starts with Doncic, who is off to another slow start, averaging a pedestrian 22.5 points per game and shooting 24 percent from three. Doncic is a rhythm player, and he admitted recently that he’s still trying to find his way back into the rhythm of the NBA grind following a grueling summer. As for the shooting struggles, a lot of those are confidence-related. Past evidence tells us he’ll turn it around sooner than later.

With Porzingis out, though, Doncic’s job has gotten tougher, as the big man’s gravity is the key element in the Mavericks’ offense that gives Doncic more space to operate. Over the last two seasons, Doncic shot 30 percent of his shots at the rim with KP on the floor compared to only 22 percent with him off. With Doncic struggling to find his shot and no Porzingis to open the driving lanes, we’ve seen Kidd utilizing Doncic more in post-up situations, where he’s been among the most effective scorers in the NBA thus far. Doncic operating out of a post is the best way for him to get going until he finds his outside shot.

Kidd has also emphasized the point of Doncic doing less, instead having other players bring the ball up court and initiate plays. The early results have been mixed. We’ve seen players like Dorian Finney-Smith being asked to do too much. His usage increased from 11 percent last season to 16 percent this season, and so far, that higher usage has resulted in more turnovers and Finney-Smith taking some unusual shots he is not used to taking (or making). Meanwhile, as predicted here, the early Powell-Porzingis lineups resulted in less-than-optimal spacing and some weird on-court situations, like Porzingis calling for a post-up in the middle of Doncic-Powell pick-and-roll action.

There are other growing pains with the offense. Assistant coach Igor Kokoskov is installing more complex European-style actions that require more screening and movement, both on the strong and weak sides of the court. Under Carlisle, the offense was simplified, with five-out spacing, less movement, and shooters filling the corners. Now, if you watch closely, you’ll see additional actions happen on the weak side to prevent opponents helping in the main pick-and-roll action. So far, some of the new Kokoskov sets work great on out-of-the-timeouts (ATO) and sideline-out-of-bounds (SLOB) situations—the Mavericks rank fourth and third in the league on those, respectively—when plays can be drawn and players know what to expect. But it will take more time to integrate more of these principles in the flow of the overall offense.

The offense would also look much better if the Mavericks could make more than 31 percent of their threes. Of the five highest-volume shooters, only Tim Hardaway Jr. is converting on three-point looks at his usual rate. Doncic, Porzingis, Finney-Smith, and Bullock are all way below their career three-point averages. Most of the looks are still great; they are just not going in. Per Synergy, 77 percent of Finney-Smith’s catch-and-shoot looks are unguarded, but he is currently making just 20 percent of them. We can expect some regression to the mean eventually.

The new offense is a work in progress, but we’ve already seen that Kidd and Doncic will revert to “old” ways when things get tough. That means Doncic running some sort of a spread pick-and-roll with a big setting a high screen and three shooters spread behind the three-point line.

For instance, in the second game of the season, Doncic started to call for his favorite stack pick-and-roll action to get himself going after a rough start.

The offense was stagnant yesterday in the first 18 minutes of the game. Then Luka Doncic reverted to a play he prefers the most – Stack PNR [Thread 👇]

A similar thing happened in the fourth game, when Doncic and his screening partner Dwight Powell torched the Spurs in spread pick-and-roll in the fourth quarter to win the game.

Then Pop tried all kinds of PNR coverages on Luka – Powell spread pnr. Luka and Powell (for all haters) scored on 6 consecutive poss (14pts).

The key thing to watch is what happens with the offense when Porzingis returns to the lineup. Will Kidd continue with the two-big lineups, or will we see more of the “old” offense back? Will they use Kokoskov sets only in special situations, or will they try to expand and drastically change the offense? The answers could go a long way toward determining how good this offense will be.

The Defense Is Improving

Level of optimism: It looks like the start of something real 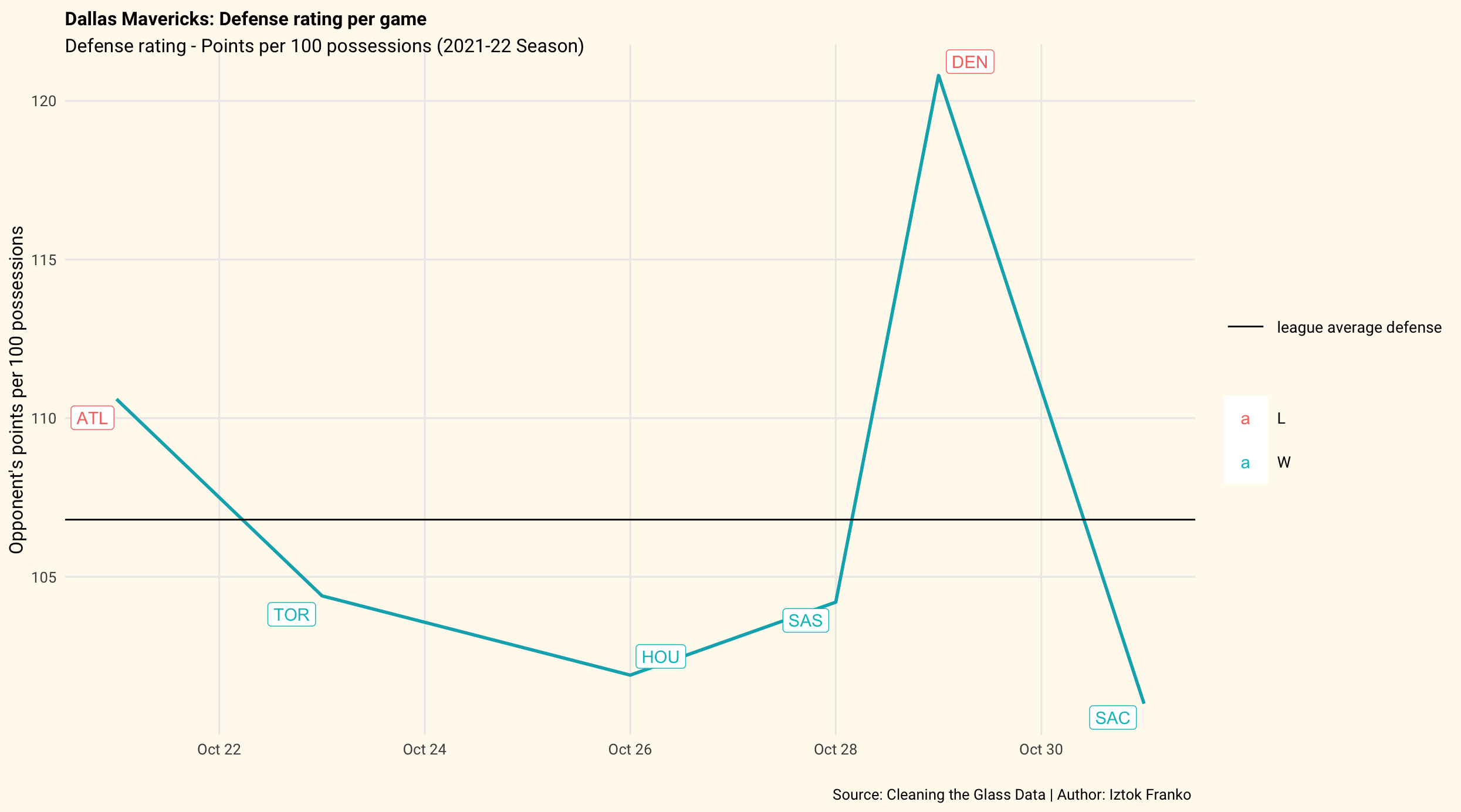 It seems Kidd and defensive coordinator Sean Sweeney might be onto something here. The Mavericks managed to pull out all four wins by playing very competitive defense. In the win over the Spurs, the Mavericks were down 20 points early in the first quarter but managed to get back in the game by playing lockdown defense. At one point, they held the Spurs scoreless for more than six minutes. That’s not something we’ve seen this team do in the last couple of seasons. In spite of the terrible performance in Denver, the Mavericks currently rank 11th in defensive rating per Cleaning the Glass data. If the NBA’s transition to more physical play is real, the Mavericks’ metamorphosis into a defense-first team couldn’t come at a better time.

That is, if this holds up.

We’ve seen this team play stretches of good defense last season only to be unable to sustain it over the long haul. The good news this time is it seems the Mavericks finally have more defensive talent on the roster. Reggie Bullock and Frank Ntilikina are good and aggressive on-ball defenders. Prior to his recent injury, Maxi Kleber looked like he got his bounce back—his current 3.1 percent block rate is at a career high. Schematically, Dallas is forcing the opponents into the right kind of shots; Mavericks opponents shoot the second-most long mid-range shots in the NBA, which are the least efficient look the game has to offer. They also rank fifth in the league in location effective field goal percentage, which is a measure for opponent shot difficulty.

But I need to see two things happen before we declare this to be genuine defensive improvement. We need to see Porzingis back in the lineup, and we need to see the defense tested against good offensive teams that put pressure on the defensive rotations. So far, the on-ball pressure and initial pick-and-roll defense look much better, but the Mavericks still struggle with the second-effort rotations. When this happens, it usually results in an open corner three: Dallas allows sixth-most in the league, and opponents shoot 51 percent on them.

One of the bigger challenges for Kidd and his staff is that they almost need to build two systems, one on offense and another on defense, because of Porzingis. The Latvian is a unique player, and Kidd needs to “scheme” for his skill set on both sides of the floor. In the last three games, Dallas played a more aggressive and heavier switching style of defense with Porzingis out of the lineup. That works because Powell, Kleber, and Cauley-Stein are mobile bigs who can defend higher at the level of the screens and switch on smaller defenders. What happens when KP gets back?

One last challenge: most of Kidd’s best defensive players are on the bench. Which brings us to my last point…

Kidd made some minor waves when he announced he listened to his leadership council trio of Doncic, Porzingis, and Hardaway Jr. to help decide his starting lineup. The problem is the trio is not a good starting point to begin with: lineups featuring that group were terrible on defense last season, and early data from this season is not any different. The trio are among the worst defenders and least aggressive players on the roster.

Consequently, the Mavericks struggle to set the tone early in the games, and the Donic-Porzingis-Hardaway Jr. combo is a big part of the problem. The Mavericks are currently outscored by 3.7 points in the first quarter and have had to play catch up in all but one of their games so far.

It’s time for Kidd to scrap the experiment with the current starting lineup when Porzingis returns from his back injury. One option would be for Kidd to replace Hardaway Jr. with a better defender like Bullock. This would improve the defense, but the spacing issues with Powell and Porzingis on the floor together would remain. The other option is to replace Powell with a wing defender and move Porzingis to the center position. Based on the Latvian’s health—the enthusiasm from the first fully healthy offseason in Dallas evaporated in one week—I’m not sure we’ll see Kidd revert to this so early in the season. The logic for Porzingis playing the 4 is to limit his wear and tear on defense. Currently, Powell is defending opposing bigs and most pick-and-roll actions, while Porzingis is usually defending the less dangerous opposing frontcourt player. This allows the Unicorn to do what he does best: protect the rim as the weak-side defender.

Either way, though, something needs to change, and soon. The longer he waits to take action, the more often we’ll see the Mavericks dig themselves into holes they shouldn’t have to climb out of.

Be the first to know about Dallas' best events, contests, giveaways, and happenings each month.
Dallas Mavericks

Not every day that Micah Parsons and Luka Doncic find themselves in the same place, at the same time.
By Mike Piellucci
Basketball