The Cowboys Number to Know: 91 (Week 12 versus Las Vegas)

The annual Thanksgiving Cowboys game was close, exciting, and quite contentious. If you watched the entire thing, you’ve probably already guessed that this column will have something to do with the many yellow flags we saw get thrown throughout this contest. The 28 combined penalties between the two teams are the most we’ve seen in a single game this year—and they racked up more penalty yardage than any other game this year to boot.

That is definitely a large part of the storyline. Those penalties, however, were evenly split between Dallas and Las Vegas. To find the number that really tells the story of why the Cowboys lost, we’re going to have to zoom in a bit closer.

This week, the number to know is 91—the total number of defensive pass interference yards assessed on Dallas cornerback Anthony Brown.

Some of those yards may have been well-deserved, and some maybe less so. But we aren’t here to completely tear apart Brown or the referee crew—even if it is the first time this century a player has been called for defensive pass interference four times in a single game.

Cowboys CB Anthony Brown became the first NFL player since at least 2000 to be flagged four times for pass interference in same game. All on third down, resulting in 91 yards. Brown been very solid overall in 2021. Penalized just once (illegal contact, 5 yards) in first 10 games. pic.twitter.com/kvktVIMxk0

All four penalties came on third downs. They were also spread across three different drives that Las Vegas turned into 13 total points, the last three of which came on the game-winning field goal in overtime.

Another way we can quantify the impact of those penalties is by analyzing the change in win probability before and after those specific plays. Using the win probability model from nflfastR, it turns out that no defensive player lost more total win probability from penalties than Anthony Brown did in Week 12, and it’s not particularly close. 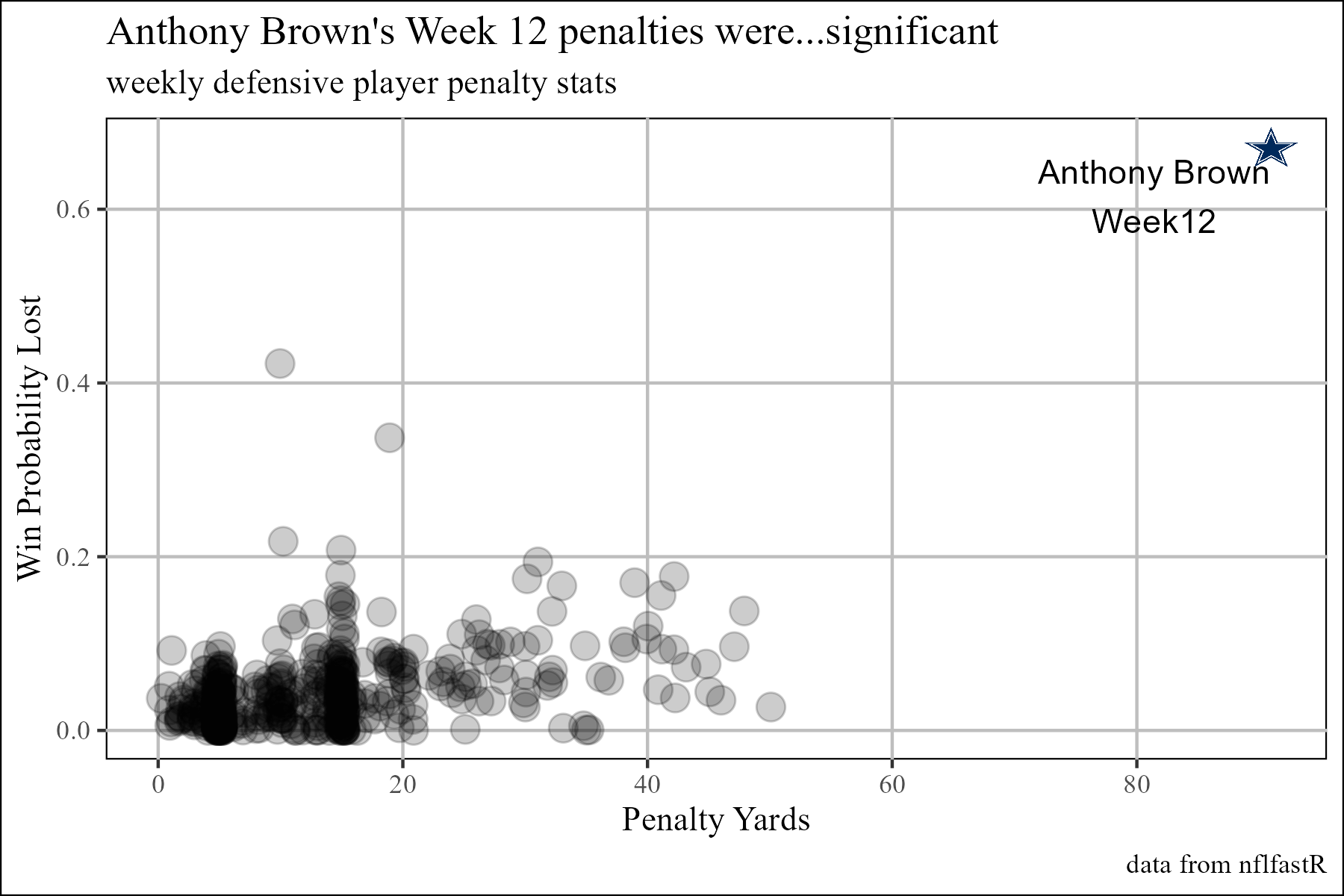 The 91 yards is nearly double the next most total penalty yards in a game this year for a single player, and the 67 percent (!) win probability lost is also far and away the most in a single week, by a single player. For those curious, the other two outlier dots up high on the left belong to Marlon Humphrey’s Week 9 and Justin Coleman’s Week 3. Those games also involved penalties in overtime.

Overtime magnifies the impact of every play, especially when the teams get past the first drive and the game becomes “next score wins.” The DPI called on Brown in overtime was one of the most high-leverage plays in the NFL this season. Take it one piece at a time, and it’s hard to disagree. The Raiders had a 3rd-and-18 from their own 43 yard line—a very low-percentage conversion probability. In all likelihood, the Cowboys were about to get the ball back, with a score of any kind netting them the win. Per nflfastR, Dallas actually had a 55 percent chance of winning the game before this play. They were favored despite not having the ball. After that pass interference call, when the Raiders suddenly had the ball in field-goal range? The Cowboys’ win probability plummeted 43 percentage points all the way down to 12 percent.

It wasn’t just the overtime penalty that killed the Cowboys on Thursday, though. Here’s the same chart we just looked at above, including only the regulation plays. 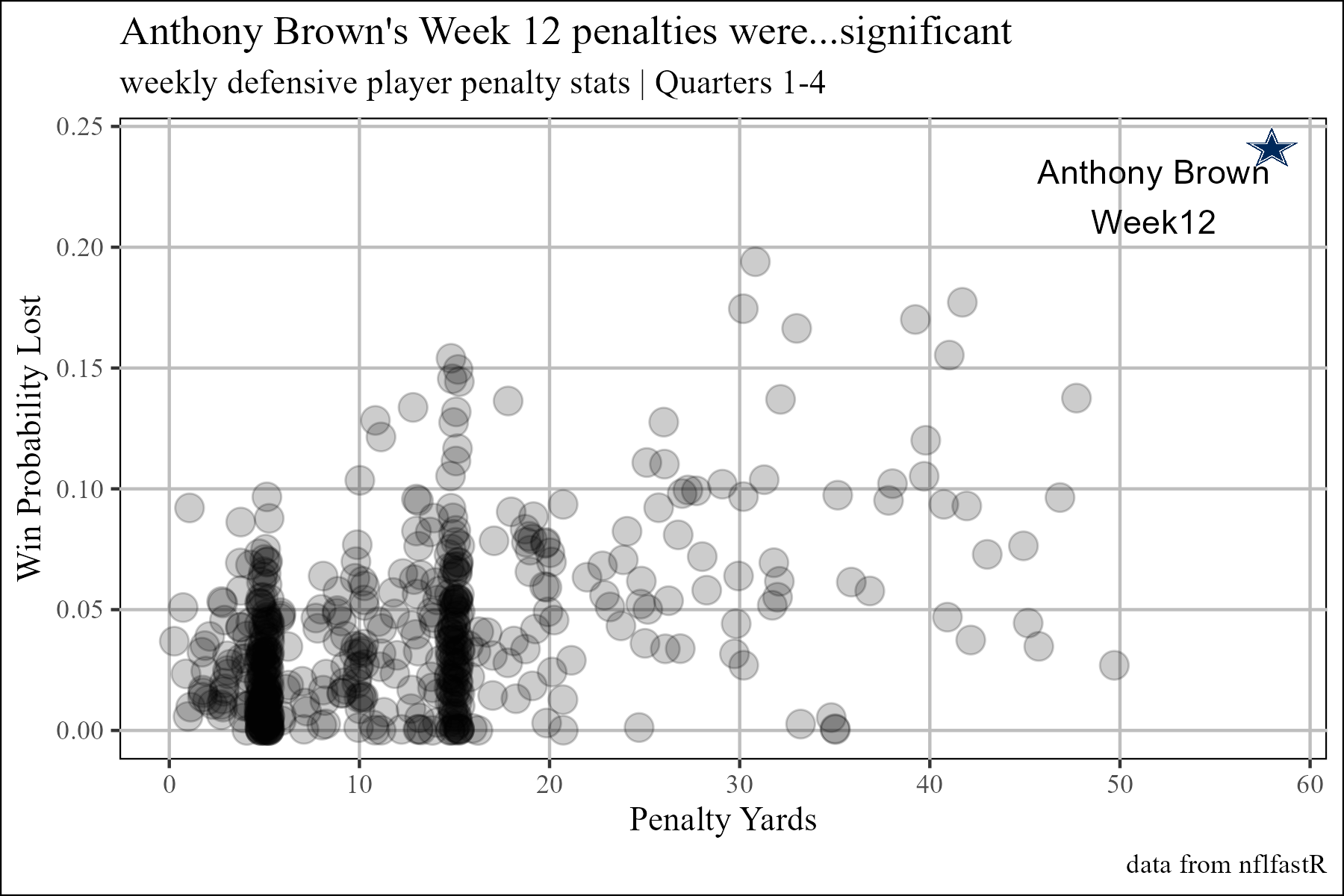 Even dropping off 33 yards and 43 percentage points of win probability, Brown still had the worst-penalized game of the year last week.

The Cowboys’ secondary is a pretty volatile one. On the one hand, they do have the third-most interceptions in the entire NFL with 15. On the other hand, they’ve given up the sixth-most passing yards per game in the league. And the thing is, Brown has actually been one of the more effective pieces of the secondary so far. While Trevon Diggs has all the big-time interceptions, Brown has the better coverage grade from Pro Football Focus. It’s Brown, not Diggs, who has allowed the lowest catch rate on the team among the starting secondary. 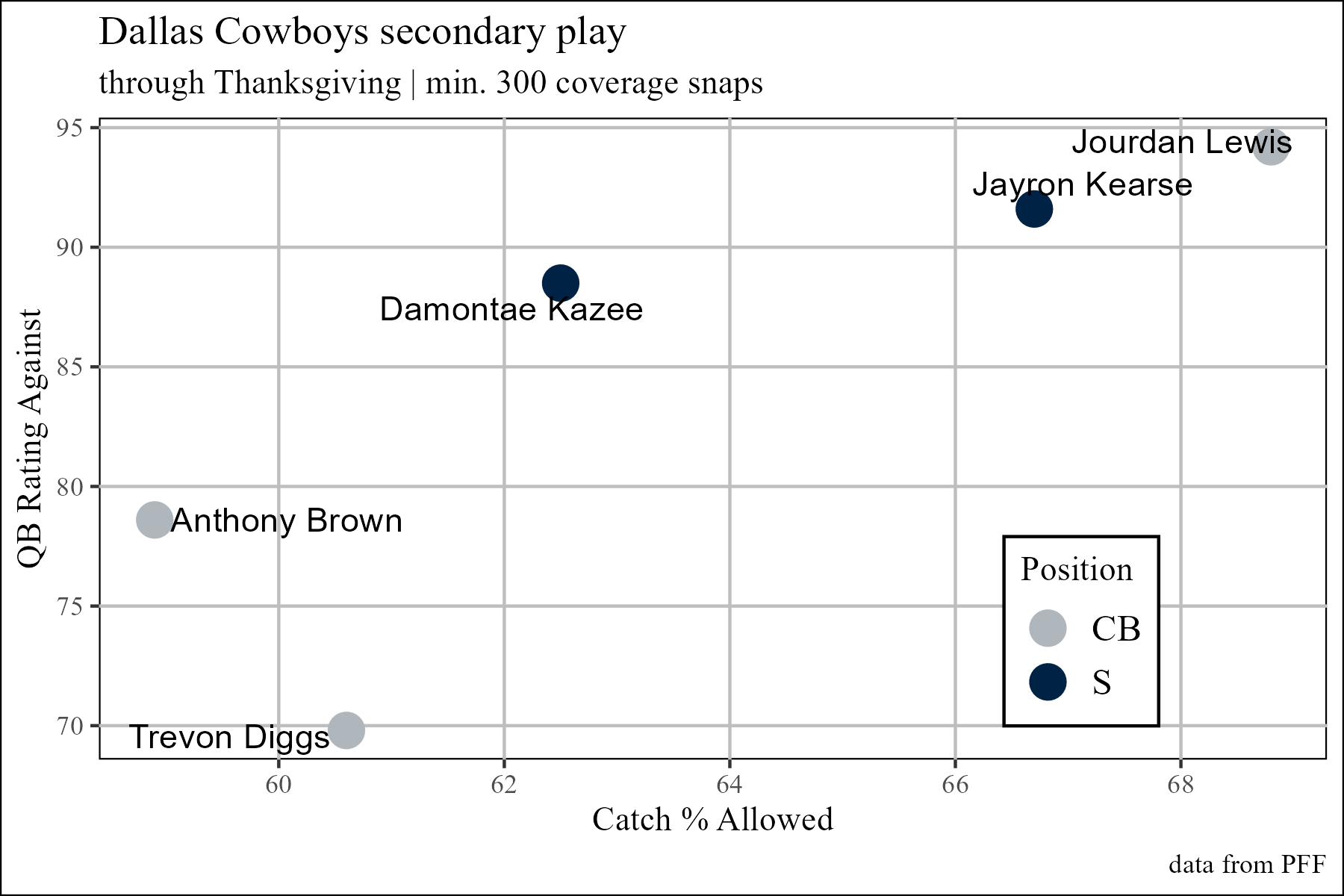 There’s been debate among the football analytics crowd regarding whether pass coverage is more important than pass rush, which we don’t need to get too into right now. But one key concept that arose from that discussion is that while a single pass rusher can offer a successful pass rush, a single defensive back cannot create a successful pass defense on his own. The thing about secondaries is that it generally takes at least four players playing well on every snap to get good results.

We know what Diggs brings: aggressive ball-hawking skills that either fail quickly or turn into picks that change the entire flow of a game. The safeties have played well enough, too—Jayron Kearse and Damontae Kazee rank 12th and 38th, respectively, in PFF coverage grade out of the top 64 safeties in the NFL.

Brown is the swing guy. When he plays well, Dallas’ secondary can be a whole, functioning unit. And when he takes four pass interference penalties, giving up 91 yards to the opposing offense? Well, the Cowboys give up 36 points.

The team once accidentally bid $275K for the URL.
By Tim Rogers
Football

It was like last week ... except the total opposite.
By Mike Piellucci
D Magazine Directories