Sports betting is still in its relative infancy in the United States, but it may have already jumped the shark.

What makes me say that? Because you can apparently bet real American dollars on Mike McCarthy walking over hot coals or doubling down on whatever the hell Monkey Butt Powder is to inspire the Cowboys to victory. Oh, and slaughtering a live chicken, too. You read that correctly.

You can credit (or blame) a site called MyBookie for taking the milquetoast prompt of “What will M McCarthy do to motivate the Cowboys” and providing a truly wild buffet of options on which to speculate: 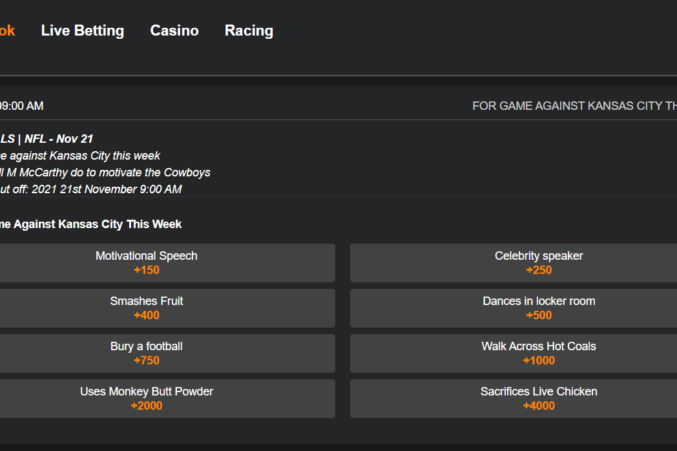 No sane person would wager on anything other than the first two options, even if McCarthy has a history with smashing watermelons and, more recently, the aforementioned Monkey Butt Powder.

BUT, if you are someone inclined to light some of your hard-earned money on fire in the name of hoping McCarthy takes a knife to poultry and splatters chicken blood on Dak Prescott’s jersey, you can and should reach out because I have questions. Many questions.