If you follow the NHL, you’ve probably seen this ominous stat before: over the last five full seasons, 77 percent of teams projected for a playoff spot by Thanksgiving ultimately end up clinching a playoff berth. Dallas is currently out of a playoff spot, so if that stat scares you as a Stars fan, well, it should. It’s not a rule, but it does reveal how small sample sizes can signal a pattern. It’s just like school: if you’ve done your homework, the quality of answers to the first 20 questions on the test will probably tell you a lot about the quality of answers to the next 80.

So, what to make of that stat? An optimist might say that probability is not inevitability. Why panic over a silly stat? John Klingberg missed four games, Jason Robertson missed six, Roope Hintz is just getting warmed up, and Jake Oettinger looks ready for full-time duties. The pessimists might counter by arguing that names don’t matter if they’re not fully weaponized. Besides, what are the chances the oldest team in the league gets through all 82 games without another injury? Dallas doesn’t seem to handle injuries well. Granted, most teams don’t, but Dallas isn’t most teams: the Boston Bruins and New York Islanders are the only other teams currently out of a playoff spot that are as healthy, and both have far more obvious reasons for playing so poorly, with the former searching for competent goaltending and the latter playing their first 13 games on the road. If six games without Robertson hurt enough to crater the Stars’ offense, what might 10 games without Miro Heiskanen do?

But a better way of looking at things might be less about the Stars and more about what they have in common with the teams that beat the odds. I looked at every team going back to 2007 that wasn’t in a playoff spot by November 25 but made it anyway, using points percentage from Natural Stat Trick to cut down on the noise of teams that didn’t play as many games as their peers by that date (doing so actually strengthens the cutoff, jumping that number from 77 percent to 81 percent). I focused on a team’s contender numbers, which are the numbers that loosely define a Stanley Cup contender: quality of special teams, on-ice goals for percentage, and expected on-ice goals for percentage.

Let’s start with the good news. First, Dallas’ power play is blistering, operating at an elite level. Predicting power play success from year to year is difficult, thanks to roster turnover, new coaches, and player fluctuations. While there’s a good chance the PP will regress, there’s no evidence to indicate it will be anything but good at the absolute minimum. Consider this: from 2001 to 2015, the league average for PP success never broke 19 percent or more. Since then, the league average hasn’t gone below 19 percent. With Heiskanen patrolling one unit and John Klingberg the other, the Stars enjoy a luxury few teams can boast.

The other hope of postseason life is Dallas’ historical control of shot quality under Bowness (expected goals). A common denominator for teams that made it when they weren’t supposed to was their control of shot quality. More than 30 teams have defied the odds since 2007, but only eight had an expected goal differential under 50 percent. Playing tight does have its benefits, making it possible for Dallas to get better simply by catching more breaks. As you can see in the second row, most teams on pace to make the postseason that ultimately missed were obvious paper tigers—unable to control the share of shot quality created versus shot quality denied, unable to control the goal differential overall, and clearly finding success early on by accident.

There’s more good news. Dallas’ penalty kill might be roadkill, but the correlation between the quality of special teams and playoff pace is weak. In the 2018-2019 season, the Vegas Golden Knights and the Pittsburgh Penguins had average to below-average PK units. There’s a consistent pattern: you can be bad on one side of special teams as long as you’re good on the other. There’s also an asterisk, however: only two teams who made the postseason despite not being on pace to do so had a worse PK unit — the 2017-2018 Philadelphia Flyers, and the 2007-2008 Nashville Predators — than Dallas’ current penalty killing squad, and that includes their present and past PK performance.

And that brings us to the bad news. Unsurprisingly, the teams that beat the cutoff had really good underlying numbers. It was clear that these teams had a recipe for being better than they were, either deserving of more goals than they were getting or allowing fewer goals than they were stopping. If we’re only including the last five full seasons, only two teams that made it were below 50 percent in either goals for percentage or expected goals for percentage (the 2017-2018 Anaheim Ducks, and the 2016-2017 Calgary Flames). No team had an all-situations goal differential as low as Dallas’. The Stars are not controlling the share of goals scored for reasons we’ve talked about ad nauseum: they don’t score enough to capitalize on their stingy defense. If we strictly focus on even strength, Dallas looks like a mediocre team. 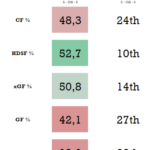 Data and Visualization per Andy and Rono

As a team, the Stars are driven entirely by Grade-A chances (i.e., high-danger shots) and not much else. They don’t control play, and the frequency with which their shots become goals (PDO) is—to be frank—garbage. You might be wondering “How can Dallas’ shooting percentage be so low if their high-danger shot attempts are so high?” Simple: you can score on low and medium-danger shots, too, and the Stars don’t generate those. Without getting too much into the weeds of fancy stats, it’s worth noting that high-danger chances—which Dallas has excelled at under Rick Bowness—are nice, but it’s increasingly open to interpretation how much they translate to goals. That makes intuitive sense to me, since not all shooters are created equal. Some want time and space for a weapons-grade slapshot or to rush up ice rather than capitalizing on traffic and greasy rebound types that Dallas prefers to generate.

Then there’s all the non-number stuff. When I watch Dallas, a Thanksgiving dinner sounds like the perfect analogy: garish, overstuffed, temporary, and with plenty of unnecessary sides (looking at you, Ambrosia Salad). Despite all the big names on the roster, the team’s success always seems fleeting. The offense comes alive when individuals take over rather than when tactics come together. The defense holds steady when netminding puts up a wall, and their special teams rely on one unit doing their job at the cost of the other unit not doing theirs.

And what huge meal is complete without the holiday family drama? The Riley Tufte scratch earned national media attention between Steve Dangle’s show, Around the Horn, and Down Goes Brown’s mailbag. The Stars have had a players-only meeting, and the coach has berated them on live television. We can point out numbers that should and shouldn’t worry us all day, but perhaps the fact that this team’s psyche is on constant display is all the evidence we need. If this team is built for the playoffs, why do they rattle so easily? When the going gets tough, why is there always some excuse? Who is owning up to the team’s struggles?

The Thanksgiving Cutoff is a fun bit of trivia, but let’s not miss the forest for the trees: it’s a history of what could have been for some, and what became for others, but it’s not a history of winners. Since 2007, only two teams who weren’t on a playoff pace would go on to clinch a postseason berth, and then win it all: the 2018-2019 St. Louis Blues, and the 2010-2011 Chicago Blackhawks. That was clearly the Stars’ goal going into this season. I could talk about their numbers, and compare them to Dallas, but you already know the answer. The old cliché in hockey is that you can’t win a playoff spot in November, but it’s possible you can lose it. I’d amend that: you can’t contend for the Cup in November, but if you don’t look like a contender by then, perhaps you never were.

Nominations Open For the 2021 Edition of the Dallas 500