It feels like ages ago since Stars fans could laugh about benefiting from one of the most boneheaded trades in recent history. Although Tyler Seguin delivered on the promise that the Boston Bruins, his previous team, weren’t willing to stay patient with, his body has been through the ringer. In 2015, he suffered an MCL tear after getting targeted with a low-bridge hit by Florida’s Dmitry Kulikov. The following year, he suffered a cut to his Achilles tendon in a freak collision with Tampa Bay’s Anton Stralman. Then, four years later, in 2020, he tore a labrum in his right hip, forcing him to miss last season. In a season in which Jason Robertson, Roope Hintz, and Joe Pavelski all had banner years, Seguin’s absence was felt even more acutely.

Seguin’s latest injury rehab was necessary but miserable, and he suffered even more injuries throughout. Reading him recount the experience to The Athletic’s Saad Yousef — in particular, the description of his stiff-legged gait and awkward stance from missing his quad muscle — made him sound like a pair of neck bolts away from being Frankenstein’s monster. There were silver linings (he got to catch up on Cobra Kai) but he had to restart his body from scratch in the middle of a pandemic. Now he’s healthy and whole, which led him to recently tell the Dallas media that he’s “feeling dangerous.” Stars fans should hope so. You could argue (and I am) that Seguin’s returning to form—even if he never re-creates what he achieved in his prime—would have a greater impact on the Stars’ fortunes than any other development imaginable.

Is that a bold claim? I don’t think so. No matter the lineup, every elite team or Cup winner has a forceful pivot. Whether we’re talking defensively sound ones like St. Louis’ Ryan O’Reilly and Chicago’s Jonathan Toews or offensively potent ones like Washington’s Evgeny Kuznetsov and Tampa Bay’s Brayden Point, having an elite forward to attack or neutralize the guts of the ice is largely, to fully intend a pun, a team’s center of gravity.

Seguin gets lost in the shuffle because he doesn’t fit the typical profile of a high-impact pivot. He’s great offensively without being the most creative, and he’s defensively responsible without being the most assertive. I get the sense that fans and management are more excited about everyone else up the middle. It’s more fun to talk about Roope Hintz’s ceiling, and it’s more enticing to see added depth at center with Jamie Benn centering the third line. But let’s slow it down. Let’s slow it way down.

Hintz may be primed to take over the offensive role, but he has averaged 11:57 of even strength TOI per game since 2018. Compare that to Seguin’s 15-plus minutes per game at even strength over the same period. The skill is obviously there for Hintz, but he hasn’t run through the gauntlet just yet. As for Benn, if he’s asked to play third-line center, one of three things will happen: either his role will morph into Radek Faksa’s, he’ll return to wing and hand Faksa his checking-line keys back, or Benn becomes offensive depth in order to outmode the traditional checking line assignment. All the same, neither Hintz, Benn, nor Faksa has done what Seguin has for close to a decade.

If my argument has any merit, it can’t depend on recency bias because we’ve seen Seguin’s drop in production, the drop in speed, and the drop in total impact. I say “total” because that’s what current models, like Goals Above Replacement, try to capture: not simply the stones breaking the surface of the water (goals and assists) but the offensive waves created in the pond by a player’s 200-foot presence (ability to help generate shots each game, suppress shots, score on the Power Play, and draw penalties) to capture the wax and wane of performance versus production.

In that context, the evidence is stark: 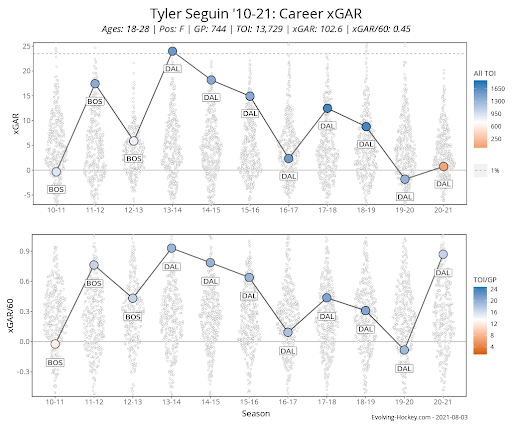 At the same time, there are some perfectly good explanations for why Seguin’s total offense has declined. The 2016-2017 season was the year Dallas was gutted by injuries, leaving Lindy Ruff with scraps to place around his star center. The ensuing seasons were defined by the suffocating, dump-and-chase systems of Ken Hitchcock, Jim Montgomery, and now Rick Bowness. “Offense from good defense” has been their goal-scoring motto, and never the other way around, creating a dampening sphere around his ideal impact. Seguin’s nadir, in 2019-2020, is quite clearly an example of a player dealing with an injury that reached a literal breaking point.

It’s to his credit that he has been able to adjust across different systems with different objectives. Yes, his overall impact has lagged, but he has been the team’s phalanx in different ways, too. For example, Faksa is credited as the defensive workhorse, which is fair, but Seguin has to score through the muck, too. In the 2018-2019 season, Faksa played only 15 more minutes total against the NHL’s elite (as defined by PuckIQ) than Seguin. The season before? Seguin played 70 more minutes against the NHL’s elite than Faksa. Sure, one plays more than the other, but Faksa isn’t asked to play all three zones the same way, either. I’d argue that the same principles apply to Hintz and Benn, just in reverse. Seguin plays against tough competition while being asked to produce, but he also produces against the tide of elite players anticipating his every move. Who else on the team can lay claim to a similar role?

If Seguin’s role dwindles because Dallas has better options, even just the bones of what once made Seguin so special—his short-side attack at the bottom of the right dots on the power play, or his chugging-but-powerful stride through the neutral—could be what the Stars need to compete. The hope from management is that these injuries haven’t accumulated enough wear and tear to further distance Seguin from the player he used to be. It’s certainly possible. At 29, he’s old in hockey years but hardly old enough to expect oblivion. During this preseason, he not only showed up on the scoresheet, his legs looked lively. Should Seguin play healthy, the Stars are legit threats.

In case you forgot how good Seguin was, consider this: 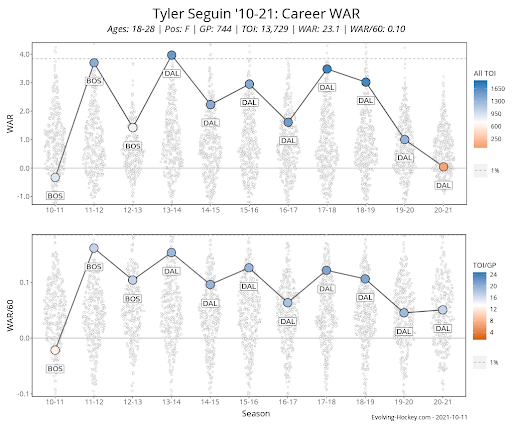 At the height of Seguin’s career in 2013-2014, his impact was worth four wins over an 82-game season according to Evolving-Hockey’s WAR model, meaning Dallas would comfortably make the playoffs at a 95-point pace (95 points typically being the magic number to do so) with him versus missing the playoffs at an 87-point pace without him (assuming his substitute was a replacement-level forward). For perspective, not even Colorado’s Nathan MacKinnon has broken that threshold. Interestingly, the math checks out: without Seguin, Dallas’ 60 points in 56 games last season would have put them on pace for 87 points over 82 games.

Seguin might feel dangerous, but being dangerous is what Dallas needs in order to contend. The Stars aren’t the only team getting a much-needed reset. When Boston traded Seguin, Scott Bradley, the Bruins’ director of player personnel, said, “I don’t know if a leopard ever changes its spots, but he’s going to have to.” Beyond being famous last words, I always found that to be an interesting analogy. Leopards, after all, are apex predators. What Seguin’s future holds is anyone’s guess. I don’t know if health alone will make the difference, but Seguin doesn’t need to change his spots; he didn’t then, and he doesn’t now, either. He just needs Dallas to play him with the confidence they had when they brought him to town.