Why the Hell Does Dwyane Wade Want to Sell Burgers in Dallas?

A story about a very weird sports-food crossover featuring the most hated athlete in Dallas sports in two decades
By October 29, 2021|8:47 am
Advertisement

We’re going to preface this by warning you that this is a weird story. The food-sports crossover is weird, the objective is weird, and the total lack of self-awareness on every level of this thing is definitely weird, too. We cannot conceive of how this burger idea came to be, and we certainly cannot wrap our brains around whatever strategy was put in place to market it. So buckle up.

On Monday, D Magazine caught wind of an email going around from some marketing muckety-muck. “Exciting news!” it began, before delivering thoroughly unexciting news: Dwyane Wade, scourge of the Dallas Mavericks, is opening a ghost kitchen, and North Texas is apparently on his list of markets. A ghost kitchen, for the uninitiated, is a dining-room-free restaurant that traffics in takeout and delivery only.

Wade’s ghostly endeavor deals in burgers. It’s called D. Wade Burgers, because why take any creative license in an industry famous for no zany names whatsoever?

We cannot imagine what the hell is in a D. Wade burger beyond copious amounts of salt and a minimal range of flavor. Does it fall apart three bites earlier than it should and then become mostly useless? Could it win a food competition if aided by extremely questionable judging? Will it only reach its full potential when paired with a filet mignon imported from the Midwest?

In and of itself, there’s not a ton here. The rise of ghost kitchens is young, but not new. The whole no-indoor-dining thing during the pandemic certainly allowed for its proliferation. What makes this unusual is — well, read the email. 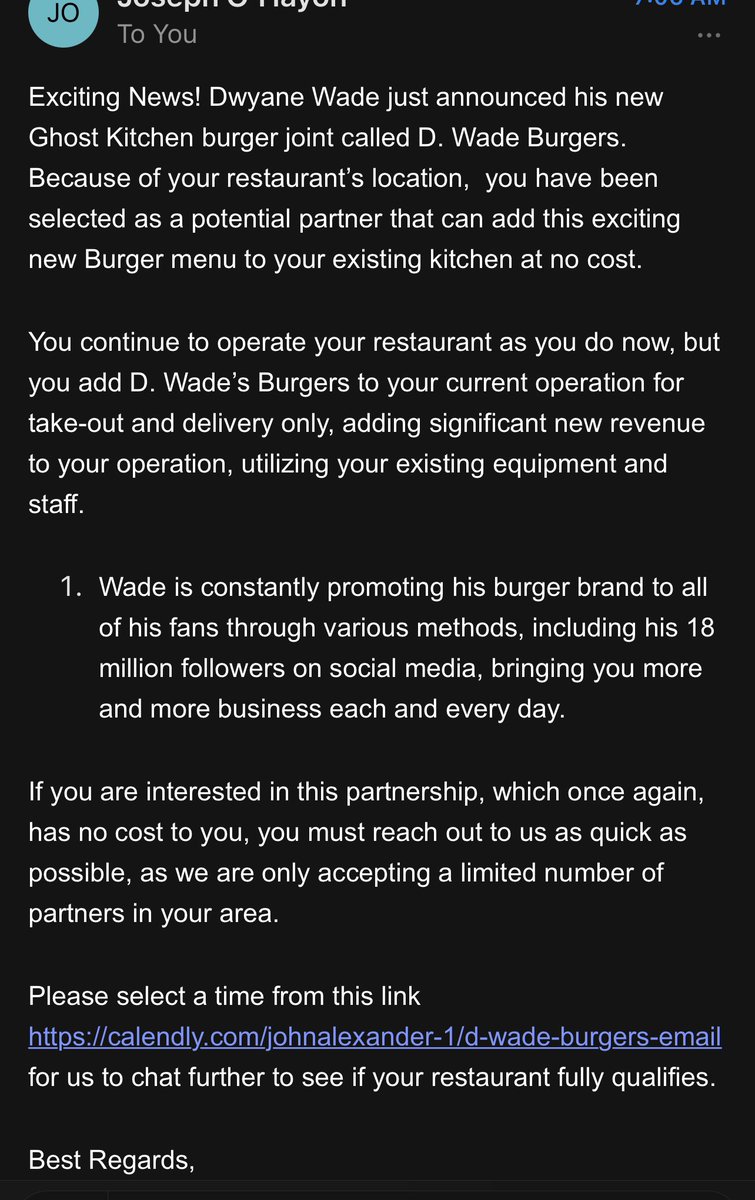 We know of at least one restaurant in town that received this but doesn’t even have a grill line installed on the premises. Even if there were the appropriate kitchen equipment needed to throw burgers on the grill—is the burger even good? Sure, the ghost kitchen will give you the recipe and promises training of the vague sort, but there’s no quality control. Make this burger in this way, whether or not you like it that way. K, thanks, good luck!

Should a restaurant—a fully fledged, dine-in restaurant—put D. Wade’s Burgers on its menu, it’s restricted to takeout or delivery only. Ah, yes, delivery. Well-known and beloved for its ability to keep a hot, steaming burger in pristine condition from point A to point B.

In the famously stable restaurant industry, partnering with this celeb-athlete’s venture, it claims, will “instantly increase your restaurant’s revenue by adding D. Wade Burgers to your current operation as a ghost kitchen.” The celebrity athlete can usher his large following to a local restaurant, leveraging whatever (little) local cachet he can muster, to buy a burger that is probably just OK.

Wouldn’t you rather go to Whataburger or Keller’s or Harvey B’s or, truly, anywhere else?

All of this is before the most obvious head-scratcher of all: who in Dallas, of all places, will buy burgers from Dwyane Wade, whom you remember from publicly trashing Dirk Nowitzki’s leadership and not so subtly implying that Dirk was faking illness ahead of the legendary Fever Game in the 2011 Finals and [YouTube Link of the 2006 NBA Finals redacted]?

The most despised pro athlete in town over the last 20 years wants to wrench his way into the local food industry through selling perhaps our most well-represented food item. Like we said, weird and not terribly self-aware.

We have no idea when, where, or if this makes landfall, but we probably won’t be updating you on it.

Our dining critic is a simple man. He just wants to look at mouthwatering photos. But a certain social media behemoth wants to change his ways.
By Brian Reinhart
Food & Beverage